18962
Burden of Psychiatric Symptoms in ASD: Understanding the Full Range from Inpatients to Outpatients and Across IQ

Objectives: The overall project goal is to further elucidate the phenomenology of psychiatric symptoms in ASD. This is the initial comparison of two large cohorts of children with ASD with the full spectrum of intellectual and verbal ability levels who were treated at either a psychiatric inpatient unit  or outpatient developmental disorders clinic.

Results: Parents endorsed a high rate of symptoms across both samples, with 99% of the AIC sample and 82% of the Cody sample exceeding at least one CASI cut-off (see Figure 1 for cut-offs by disorder). The AIC sample had significantly higher symptom severity scores (p < .0001) with large effect sizes across domains (Cohen’s d’s from .65-.90), except for depression. Higher IQ was related to more severe symptoms of ODD, GAD, and depression in the AIC sample, but was not related to either ADHD or mania symptoms (Figure 2). Magnitude of correlations between IQ and psychiatric symptom severity between the AIC and Cody samples only significantly differed for MDD (p=.005).

Conclusions: Psychiatric inpatients with ASD generally had more severe symptoms across common psychiatric domains than outpatients with ASD. These findings highlight the importance of psychiatric symptom severity as a key correlate of the most severe ASD presentations. Depression patterns were notably unique, with similar severity ratings across samples and a strong association with higher IQ only in the AIC. IQ was related to psychiatric symptom severity in several domains, which highlights the need to study comorbidity in fully representative samples. Future item-level analyses will help clarify whether IQ effects stem from reporting differences for symptoms that are more difficult to detect among those with less verbal ability. This work will help identify indicators of psychiatric hospitalization risk and inform our understanding of the structure of psychiatric symptoms in ASD. 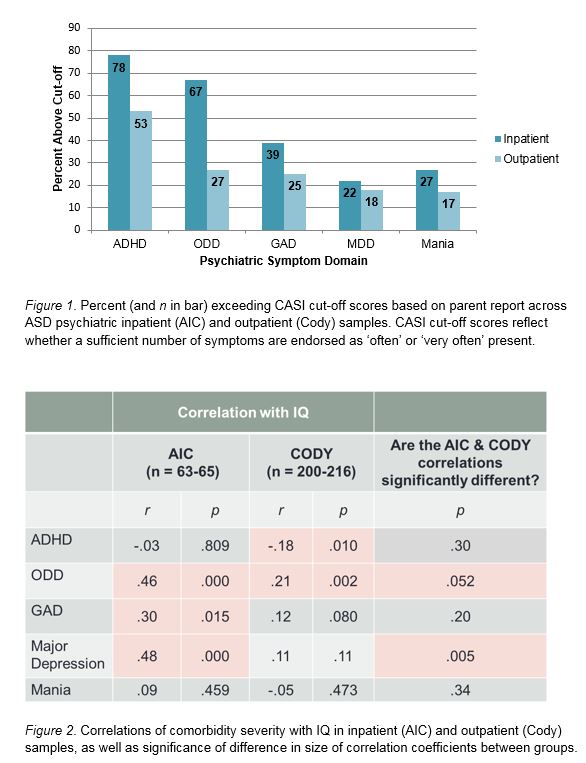