One of the cardinal and unique features of Autism (ASD) is their difficulty in understanding the mental states of others (Theory of Mind; ToM). Despite numerous behavioural and neuroimaging investigations, it is as yet unclear why individuals with ASD tend to struggle with this task. It has been suggested that the computational and neural mechanisms that underpin ToM may be similar to those that underpin first-person Reinforcement Learning (RL), i.e. unexpected decision-making outcomes (false beliefs) constitute prediction errors (PE) that activate neurons in regions such as the Middle Cingulate Cortex (MCC; Apps et al., 2013). Here, we present a novel paradigm for investigating ToM processes in ASD that is amenable to computational modeling and neuroimaging.

Fifteen ASD and twenty age and IQ matched control subjects participated in this study. Figure 1 shows the experimental paradigm. Trials began with the presentation of 2 white doors with the Agent (“Player 1”, “Player 2”, or “Computer”) printed underneath. “Player 1” meant the subject in the scanner picked one of the two doors. “Player 2” or “Computer” meant the subject in the scanner watched a door being selected by either an individual they met outside, or a computer. Once a door was chosen it would change to red or green; a red door indicated the player would probably not win money this trial, a green door indicated the player would probably win a euro. This contingency was true for 66% of trials (True Belief trials: TB). The remaining 34% of trials were False Belief trials (FB) where the contingency was reversed, i.e. no money behind a green door, or a euro behind a red door. Regardless of which agent was playing, the subject in the scanner always received privileged information in the lower left corner of the screen telling them what the real outcome of the trial would be. At this point the subject could determine if themselves, the other player, or the computer held a TB or FB. Subjects in the scanner would press a button immediately after the privileged information to indicate if this was a TB or FB trial.

Total accuracy (F(1,33)=15.894,p<0.001) and FB accuracy (F(1,33)=15.84,p<0.001) were significantly poorer in ASD individuals compared to controls. However, only FB trials showed a significant Group*Agent interaction (F(2,66)=6.095,p<0.005). This is driven by significantly poorer accuracy in ASD for third person and computer FB trials compared to their own FB trials (Figure 2A). There were no differences between Agents in the control group. Using fMRI we localized these Group*Agent interactions to MCC and left Heschl’s Gyrus (OP 4, Figure 2B).

Using a RL framework we provide strong evidence that a deficit in social PEs (PEs about other people) may underlie problems with ToM tasks. This is consistent with Apps et al (2013) who proposed that disruption to the gyrus of the MCC would lead to specific deficits in social cognition, as seen in ASD. 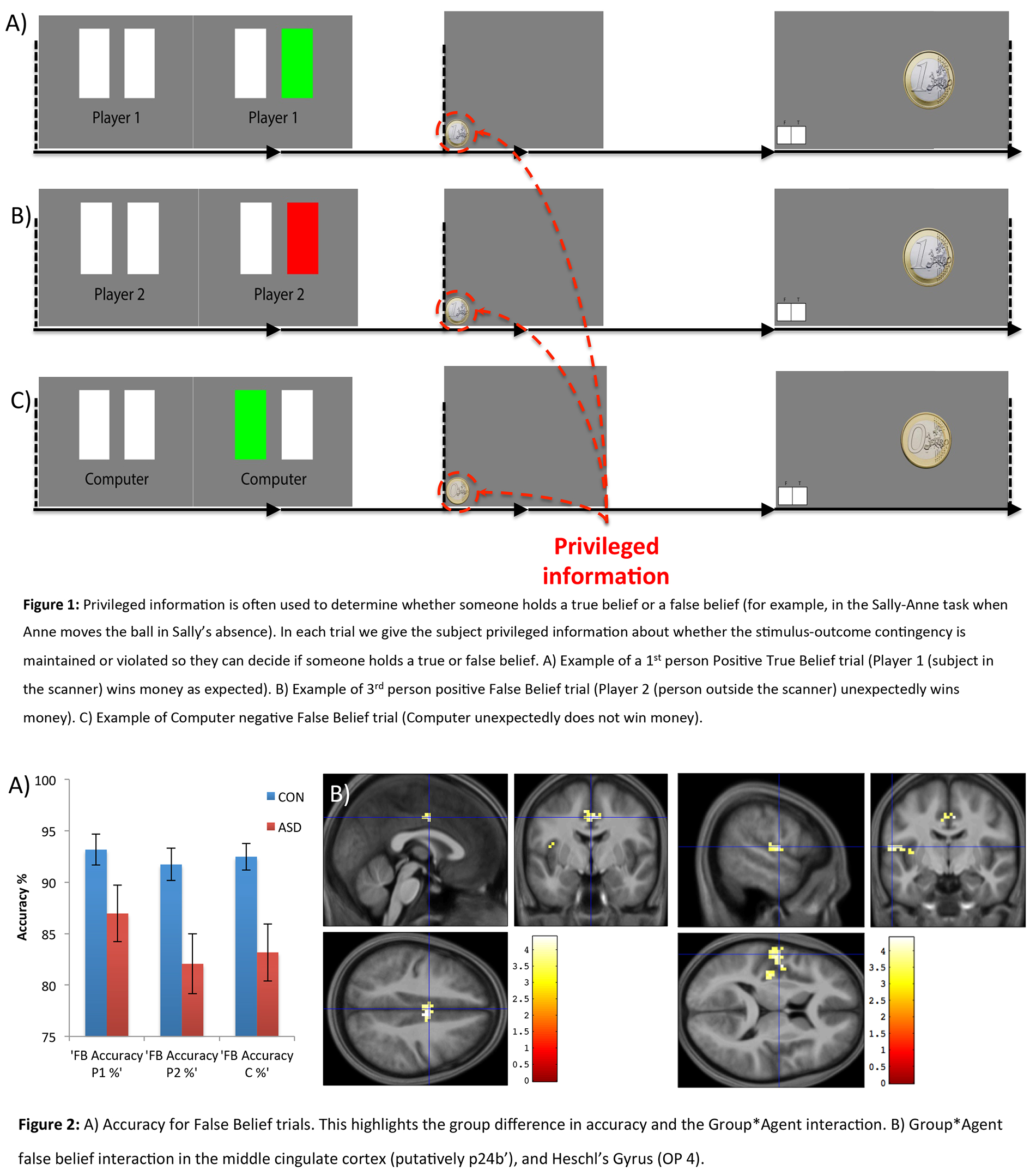