Imperial Ballroom (Grand America Hotel)
A. B. Ratto1, L. G. Anthony2, L. Kenworthy3, K. M. Dudley4, A. C. Armour2 and B. J. Anthony5, (1)Children's National Health System, Silver Spring, MD, (2)Center for Autism Spectrum Disorders, Children's National Medical Center, Rockville, MD, (3)Children’s Research Institute, Children's National Medical Center, Washington, DC, (4)Children's National Medical Center, Rockville, MD, (5)Center for Child and Human Development, Georgetown University, Washington, DC
Background:  Under the DSM-5, a diagnosis of autism spectrum disorder (ASD) no longer excludes a diagnosis of Attention-Deficit/Hyperactivity Disorder (ADHD).  Given the high rates of problems with attention and impulse control in ASD, it is likely that many children with ASD will qualify for a comorbid diagnosis of ADHD (Leyfer et al., 2006). Prior research has found that in the general population, African American (AA) children tend to have higher rates of problems with attention, hyperactivity, and impulsivity than White children, but are less likely to be diagnosed with ADHD (Miller, Nigg, & Miller, 2009). AA children are also less likely to be diagnosed with ASD (CDC, 2014). Thus, AA children with ASD may be at particular risk for under-diagnosis of comorbid ADHD.

Objectives:  The aim of the present study was to investigate rates of comorbid symptoms of ADHD and ADHD diagnoses in AA versus White children with ASD. Based on prior research, it was hypothesized that rates of ADHD diagnosis would be lower in AA children than White children, but that symptom rates would be higher.

Methods:  Participants included treatment-seeking youth with a confirmed diagnosis of ASD, ages 5-19 years with an IQ>70, recruited as part of a larger research study and through clinical evaluation. From the initial sample of 966 participants, a final sample of 35 White and 35 AA participants was generated, matched on gender and full-scale IQ (within 5 points). Groups did not differ significantly based on age or highest level of parental education.  Parent report on the ADHD Rating Scale (DuPaul, Power, Anastopoulos, & Reid, 1998), and select subscales of the Behavior Rating Inventory of Executive Function (BRIEF; Gioia, Isquith, Guy, & Kenworthy, 2000) and the Child Behavior Checklist (CBCL; Achenbach, 2001), was compared across the AA and White groups. Rates of clinical ADHD diagnosis and use of stimulant and non-stimulant medication for ADHD symptom treatment, obtained by medical record review, were also compared.

Results:  Independent samples t-tests were used to assess differences in ADHD symptoms across ethnic groups. Chi-square analysis was used to assess differences in diagnostic rates. Significant differences were found on both the Inhibit (t=3.04, p<.003) and the Working Memory (t=2.95 p<.004) subscales of the BRIEF, with White children rated as having significantly more problems than AA children. White children were also rated as having significantly more problems on the Attention Problems subscale of the CBCL (t=3.04, p<.003) and the Inattention subscale of the ADHD Rating scales (t=2.66, p<.01). Results of a chi-square analysis indicated that White children were significantly more likely to be diagnosed with ADHD (χ2=5.57, p<.02). However, rates of medication use did not differ significantly by ethnicity.

Conclusions:  Contrary to findings in the general population, AA children with ASD were rated as having fewer symptoms of ADHD than their White peers. AA children with ASD may have lower rates of comorbid ADHD. Differences in parent perceptions may also have affected the present findings. 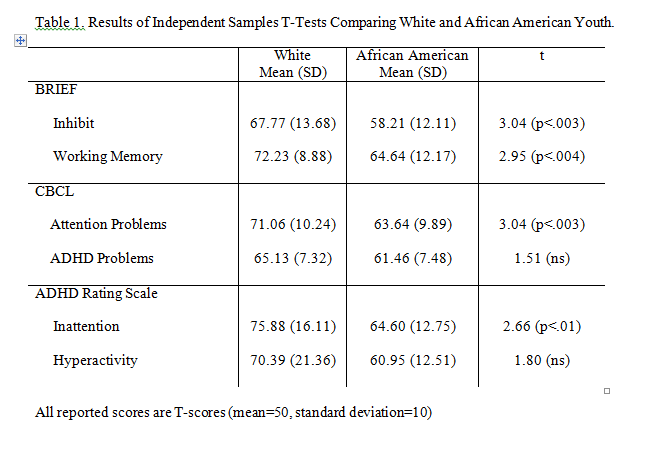