19234
Sex Differences in Biological Motion Perception Among Youth with ASD: An fMRI Investigation

Objectives: Investigation of the skewed sex ratio in ASD has previously been limited by small sample sizes of ♀ASD. To address this knowledge gap, we are oversampling ♀ASD by recruiting from multiple sites nationwide over a five year period. Here, we report on preliminary fMRI-assessed sex differences in brain response to biological motion, among youth with ASD as well as unaffected sibling (US) and typically developing comparison groups.

Methods: Participants, aged 8-18 years (M = 12.8 yr), are a subsample (N = 93) collected during this ongoing project. Exclusion criteria included root mean squared movement ≥ 4mm. Group membership was as follows: ♀ASD n = 19; ♂ASD n = 21; ♀US n = 15; ♂US n = 6; ♀TD n = 15; ♂TD n = 20. Participants viewed 12 interleaved blocks of point-light displays of biological motion, 6 coherent (BIO) and 6 scrambled (SCRAM). FMRI data were analyzed using tools from FSL implemented via LONI Pipeline. At the single-subject level, the contrast of interest was BIO > SCRAM with standard motion parameters and motion outliers included as covariates. Higher-level analysis was carried out at the whole-brain level with automatic outlier deweighting; images were thresholded at Z > 2.3 and a cluster-corrected p = 0.05. Variances were calculated separately for ASD, US, and TD groups, and age was entered as a covariate. The BIO > SCRAM mean was calculated for each group; additionally, BIO > SCRAM activity for ♀ASD  was compared to ♂ASD, ♀US, and ♀TD. Sex differences within the comparison groups were also tested.

Results: Clear functional differences exist between ♂ASD  and ♀ASD responses to biological motion stimuli, with ♀ASD demonstrating greater activity in temporo-occipital, prefrontal, striatal, amygdalar, and neocerebellar regions than ♂ASD. ♀ASD response to biological motion was also greater than ♀TD in amygdala, medial prefrontal cortex, precuneus, and paracingulate. Similar to ♀ASD, ♂TD had greater activity than ♀TD in ventromedial prefrontal cortex and precuneus. No significant differences were found between ♀ASD and ♀US. See figure for further detail.

Conclusions: Previously-drawn conclusions about atypicalities in social brain response among individuals with ASD may be male-specific. In particular, ♀ASD may not show the hypoactivation in temporal regions (e.g., posterior superior temporal sulcus and temporo-parietal junction) that has been repeatedly documented in predominantly ♂ASD  samples. Further, the differences in ♂ASD  and ♀ASD response are not completely attributable to an overlaying of typical sexually dimorphic brain responses onto this population; ♀ASD differed from ♀TD in ways that were highly similar to the ways in which ♂TD differed from ♀TD. These results are highly novel, and even in their preliminary form represent one of the largest samples in which ASD-related sex differences in functional brain response have been tested. 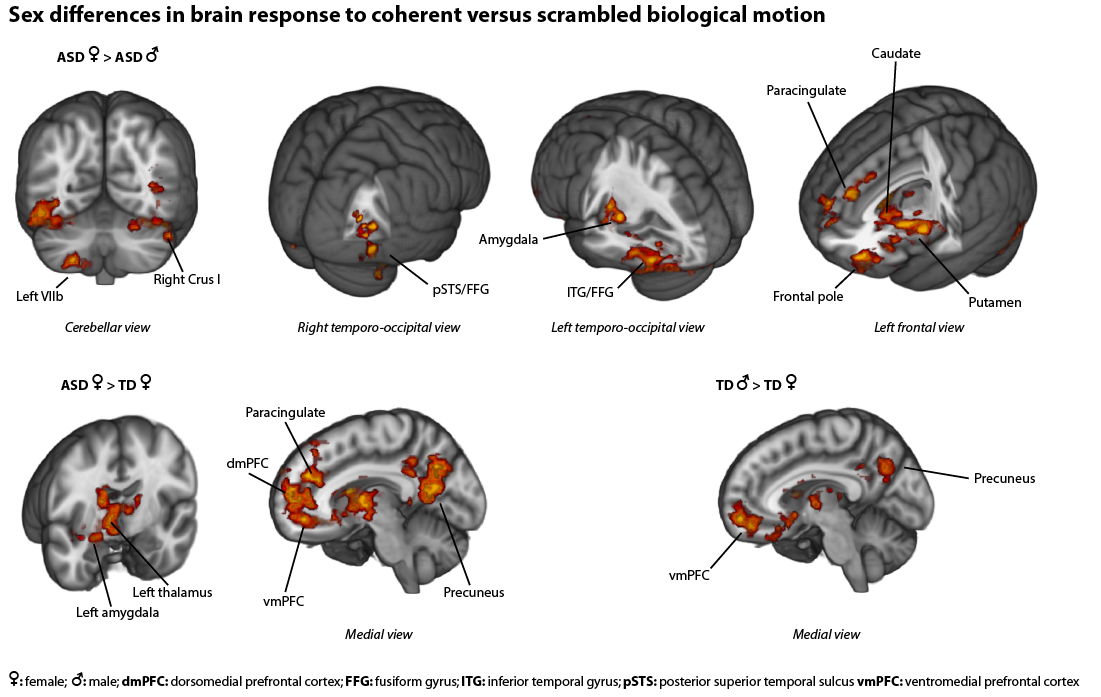