19348
Close but No Cigar: Factor Structure of the ADHD Rating Scale in Children with Autism Spectrum Disorder

Imperial Ballroom (Grand America Hotel)
B. E. Yerys1,2, J. Nissley-Tsiopinis3, A. de Marchena1, L. Antezana1, T. J. Power2,3 and R. T. Schultz1,4, (1)Center for Autism Research, The Children's Hospital of Philadelphia, Philadelphia, PA, (2)Psychiatry, University of Pennsylvania, Philadelphia, PA, (3)Center for the Management of ADHD, The Children's Hospital of Philadelphia, Philadelphia, PA, (4)Departments of Pediatrics and Psychiatry, University of Pennsylvania, Philadelphia, PA
Background: DSM-5 allows comorbid diagnosis of autism spectrum disorder (ASD) and attention deficit/hyperactivity disorder (ADHD). This comorbidity was not allowed under DSM-IV, thus there is a paucity of research that examines whether parent and teacher rating scales used to identify significant ADHD symptoms are appropriate for use in youth with ASD. Many core symptoms of ADHD occur in a social context (e.g., talks excessively, doesn’t listen when spoken to directly, interrupts or intrudes others, difficulty awaiting turn), and it is possible that elevated scores in children with ASD may be capturing social impairments rather than inattention and hyperactivity/impulsivity impairments.

The ADHD Rating Scale is a commonly used measure in clinics and research as a screen for ADHD, because it maps directly to DSM symptoms. In a normative sample, the original factor analysis of the ADHD-IV rating scale found the best fit to be a two-factor solution (inattention and hyperactivity/impulsivity) consistent with the DSM-IV and DSM-5 ADHD subtypes. There are no published studies that examine the ADHD Rating Scale’s factor structure in school-age youths with ASD.

Objectives: To characterize the factor structure of parent and teacher ratings ADHD rating scale in a large sample of youth with ASD and to probe commonly observed relationships between ADHD symptoms and youth characteristics.

Conclusions: Prevalence rates and relationships with youth characteristics converge with prior studies, but the factor structure observed in community youth did not fit for youth with ASD. Three items require modification to distinguish ADHD from social interaction deficits or more general ASD deficits. This study has significant clinical and research implications for screening/diagnosing ADHD in ASD. 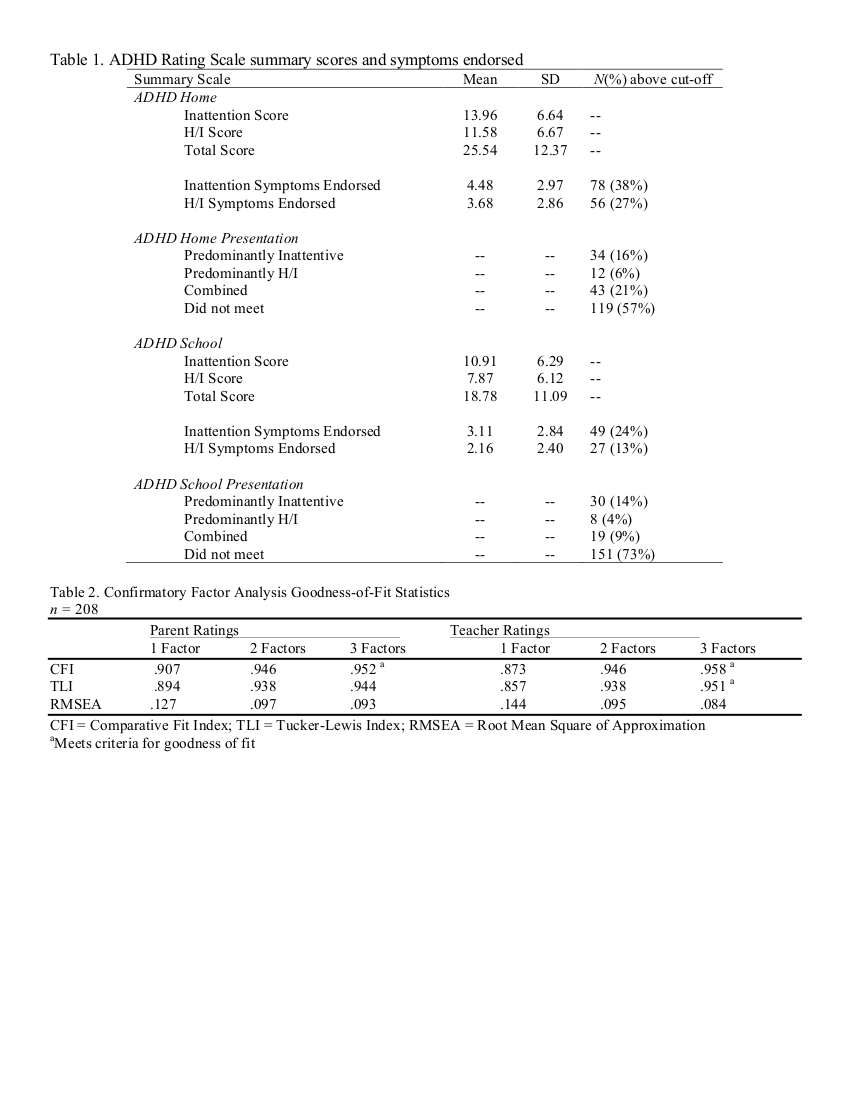