Grand Ballroom A (Grand America Hotel)
D. N. Top1, K. Stephenson2, M. South3 and C. B. Kirwan3, (1)Giant Steps Program, Wasatch Mental Health, Provo, UT, (2)Department of Psychology, Brigham Young University, Provo, UT, (3)Psychology and Neuroscience, Brigham Young University, Provo, UT
Background:   Improved understanding of the neural mechanisms that underlie unique manifestations of anxiety in ASD may provide targets for etiological research as well as for better treatment specificity. Classical fear conditioning, which is well understood in both animal and human models, offers a useful starting point for research into brain-behavior relationships between anxiety and autism. Several recent studies have shown intact fear acquisition but disrupted extinction or reversal learning in ASD. To date, however, there have been no fMRI studies of brain mechanisms that contribute to fear learning and extinction in this population.

Objectives:   We report findings from behavioral and functional neuroimaging studies of potentially atypical function involving medial temporal and frontal systems. We hypothesize that such atypical function during extinction of learned fear may contribute to difficulty adapting to changing contexts in ASD and lead to subsequent symptoms of uncertainty and anxiety.

Results:  Analyses of initial early fear acquisition yielded the greatest differences, with right amygdala and left insula activation greater in controls than ASD for threat compared with non-threat stimuli. ROI analysis across all 4 runs revealed that activation patterns for these ROIs show a consistent, statistically significant descrease for the CON group, in contrast to a steady increase across the experiment in the ASD group that persists into the extinction or safety period (see Figure 1). During the final extinction run, both left amygdala and right insula showed significantly greater activity in the ASD group compared to controls (see Figure 2).

Conclusions:  Although previous psychophysiological studies of fear conditioning studies in ASD have had mixed findings, several such studies have suggested delayed acquisition of fear conditioning, fear learning, and subsequent updating of fear to safety conditions. These fMRI data support the idea that fear learning networks including amygdala and insula are less activated in ASD during fear acquisition, but show increased activation during contexts (e.g., extinction trials) that should be safe. In other words, the ASD group is delayed in activation of the fear networks and is subsequently delayed in their response to extinction cues, meaning they are afraid when they should be feeling safe. We hypothesize that chronic everyday anxiety in many individuals diagnosed with ASD may arise from uncertainty regarding contextual cues for fear versus safety. 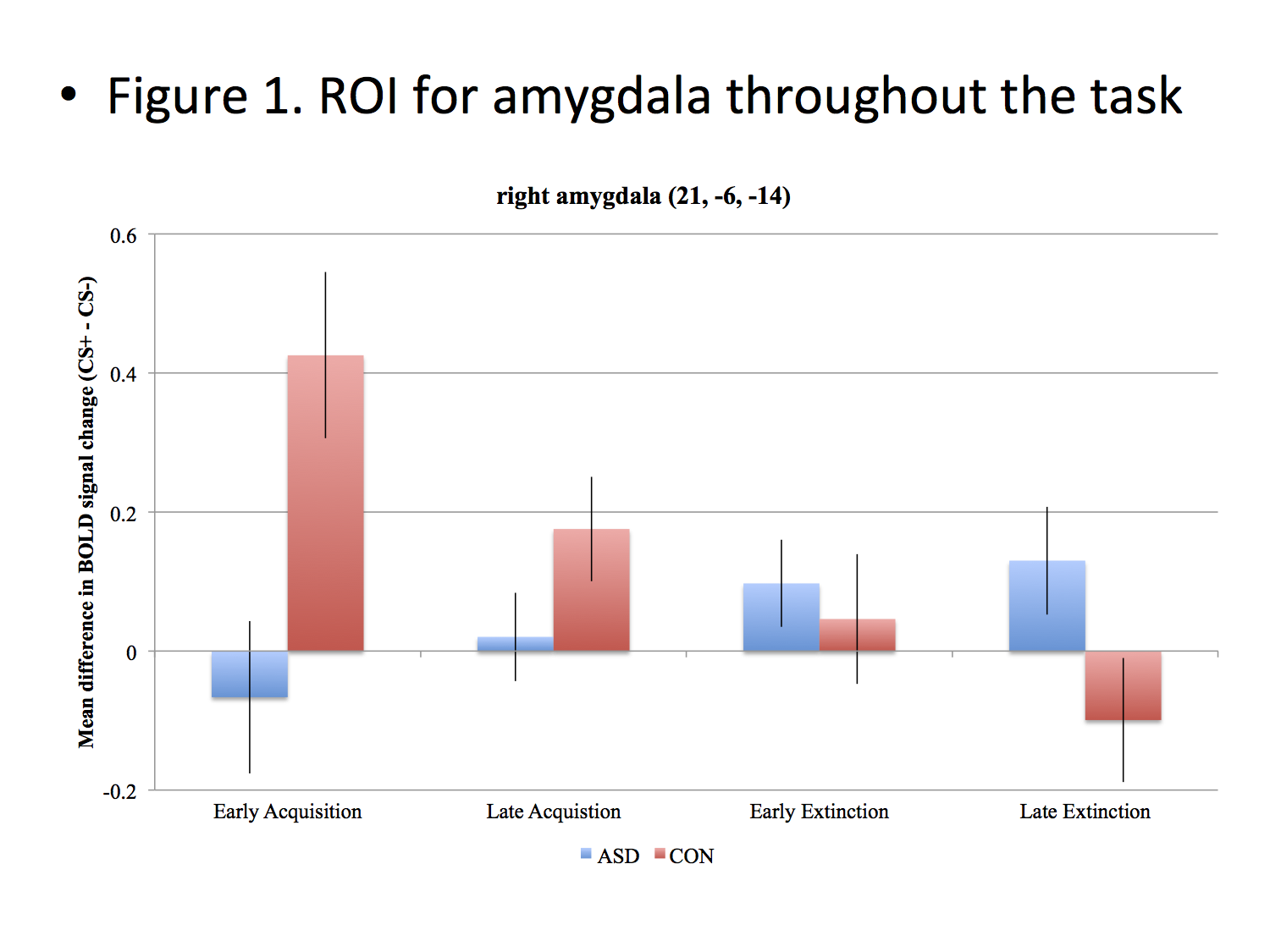