Face processing abilities are supported by a distributed network of regions that includes a “core” network important for processing perceptual properties of faces, as well as an “extended” network of regions that includes nodes supporting higher level aspects of face processing such as personal significance, social memory, and motivational relevance.   The perceptual nodes have received a great deal of attention, but the extended network is somewhat understudied, particularly with regard to face processing deficits in autism spectrum disorder.  One node of the extended network is the orbitofrontal cortex (OFC), which has been implicated in processing face emotion and/or facial beauty.  Outside of the face processing literature, the OFC has been broadly implicated in value computations in both decision-making and response to biological and personal value (e.g. food, money).  Thus, the question remains as to whether the OFC encodes a category-specific social-communicative value that is distinct from other object categories. Furthermore, there is currently no evidence of a relationship between individual differences in social-communicative skills and activation of the OFC in response to faces.

To characterize category-selectivity and brain-behavioral correlates in the OFC in response to various categories of objects in a cohort of 20 healthy college age adults using fMRI (10 female; mean age=24).

In an fMRI study, we used a block design in which 4 categories of objects were presented, including faces, scenes, clocks, and highly palatable food.  Image acquisition of the OFC was optimized using a 30-degree angle slice acquisition and post-processing correction of geometric distortion using gradient field maps. Prior to the imaging session, participants also completed the Broader Autism Phenotype Questionnaire (BAP-Q) and the Cambridge Face Memory Test (CFMT).

Regions of interest were computed based on the AAL atlas, including medial and lateral OFC subregions (mOFC; lOFC), as well as bilateral amygdala and bilateral nucleus accumbens (Nacc).  Results revealed face-selective responses in the mOFC and amygdala and reward-general (faces & food greater than other object categories) responses in lOFC and Nacc (See Figure 1). In addition, face-selective responses in the mOFC appear to be behaviorally relevant, as responsiveness to faces in this region inversely correlated with the aloof subscale of the broader autism phenotype (BAP-Q), which indexes a lack of interest or enjoyment in social interactions (Figure 2A). The relationship between mOFC response to faces and the BAP-Q aloof subscale was distinct from face-memory abilities (CFMT) that were correlated with activation in the right fusiform gyrus (Figure 2B).

These findings suggest that regions of the OFC may be selective for social stimuli and that the function of this region in the extended face network may be linked to social motivation related to the autism phenotype. The mOFC response is distinct from face perception responses in the fusiform gyrus, suggesting a distinct function of this region in social motivation, rather than perceptual aspects of face processing.  These results indicate that future studies of the development of OFC face patches and their integrity in individuals with ASD is warranted. 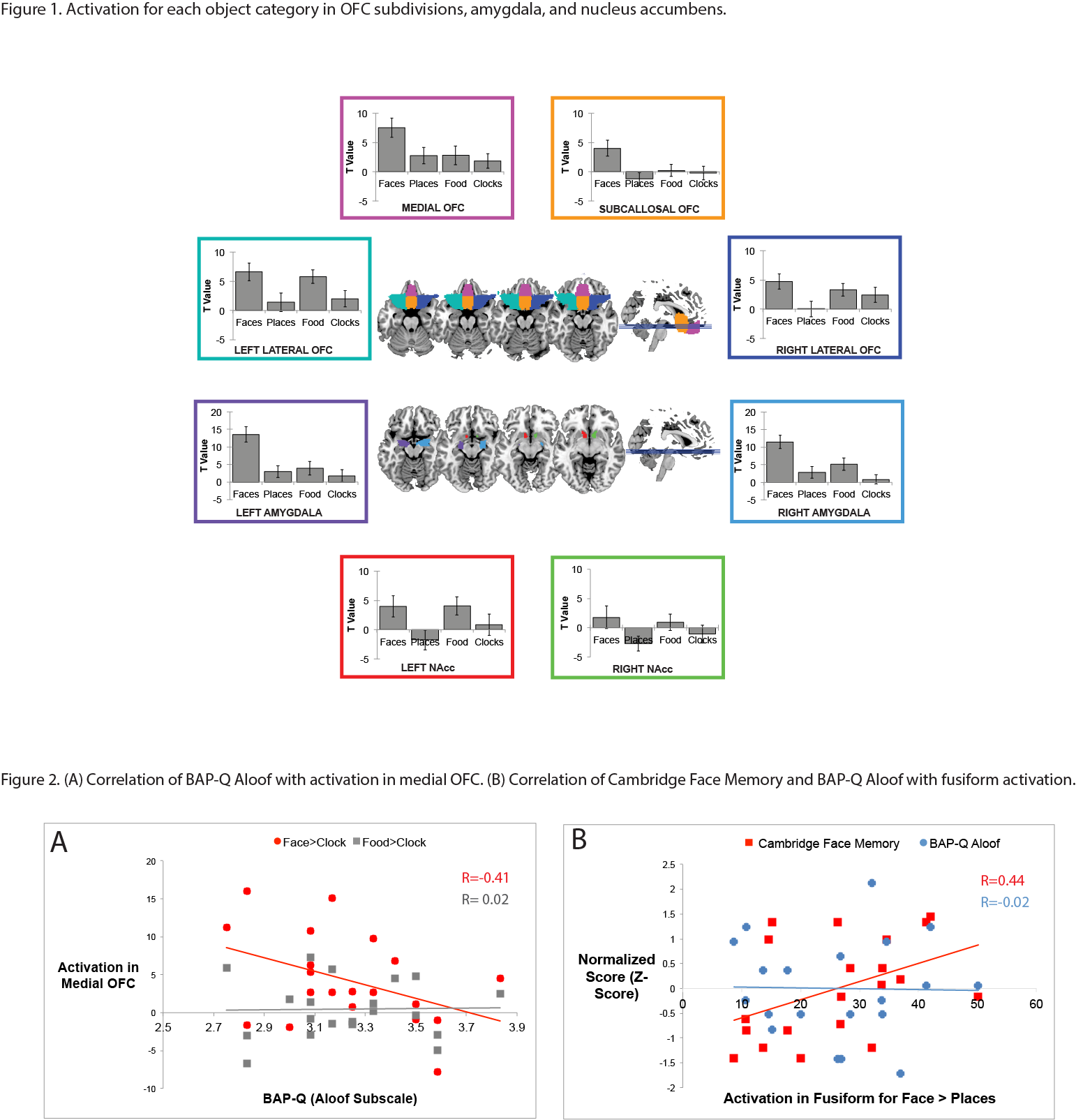