Imperial Ballroom (Grand America Hotel)
K. J. Varcin1, S. S. Jeste2 and C. A. Nelson3, (1)Developmental Medicine, Boston Children's Hospital, Harvard Medical School, Boston, MA, (2)UCLA, Los Angeles, CA, (3)Education, Harvard Univesity, cambridge, MA
Background: Tuberous Sclerosis complex (TSC) is an autosomal dominant disorder caused by mutations in TSC1 or TSC2 genes. TSC is often diagnosed prenatally or shortly after birth and confers a high risk of neurodevelopmental disorders, most commonly, autism spectrum disorder (ASD) and intellectual disability. Up to 80% of children with TSC will experience intellectual delay and up to 60% will meet criteria for ASD. This high comorbidity coupled with the prenatal diagnosis of TSC provides a model system to investigate pathways to ASD early in life. Currently, the causal mechanisms leading to the pathogenesis of neurodevelopmental disorders in TSC are yet to be elucidated with genetic and neurological correlates of the disorder (i.e., tubers and seizures) unable to account for the high preponderance of ASD in this clinical group. Recent evidence from both animal and human studies of TSC has pointed towards disturbances in the visual domain as a potential pathway to the development of ASD in TSC.

Objectives: To identify potential neurophysiological markers of ASD in infants with TSC by assaying low- and high-level visual processing.

Methods: The data reported form part of an ongoing multi-site, longitudinal investigation mapping the development of infants with and without TSC from 6 months through to 36 months. High-density electroencephalographic (EEG) recordings were conducted with infants with TSC and age-matched typically developing controls. Low-level visual processing was assessed using a pattern-reversal visual evoked potential (VEP) paradigm. Higher-level visual processing was assessed using a face-object paradigm. Peak amplitude and latency of the P1 was quantified in the VEP paradigm and mean amplitude of the N290 and P400 was quantified in the face-object task. ASD was assessed at 24 and 36 months with the Autism Diagnostic Observation Schedule and developmental level was assessed using the Mullen Scales of Early Learning.

Conclusions: Preliminary findings suggest that children with TSC who meet criteria for ASD display distinct electrophysiological responses to visual stimuli. Specifically, these findings point towards alterations in both low-level and higher-level visual processing in infants with TSC and ASD. Disturbances in the neural processing of visual stimuli may be a contributing pathway to the high rates of ASD in TSC. 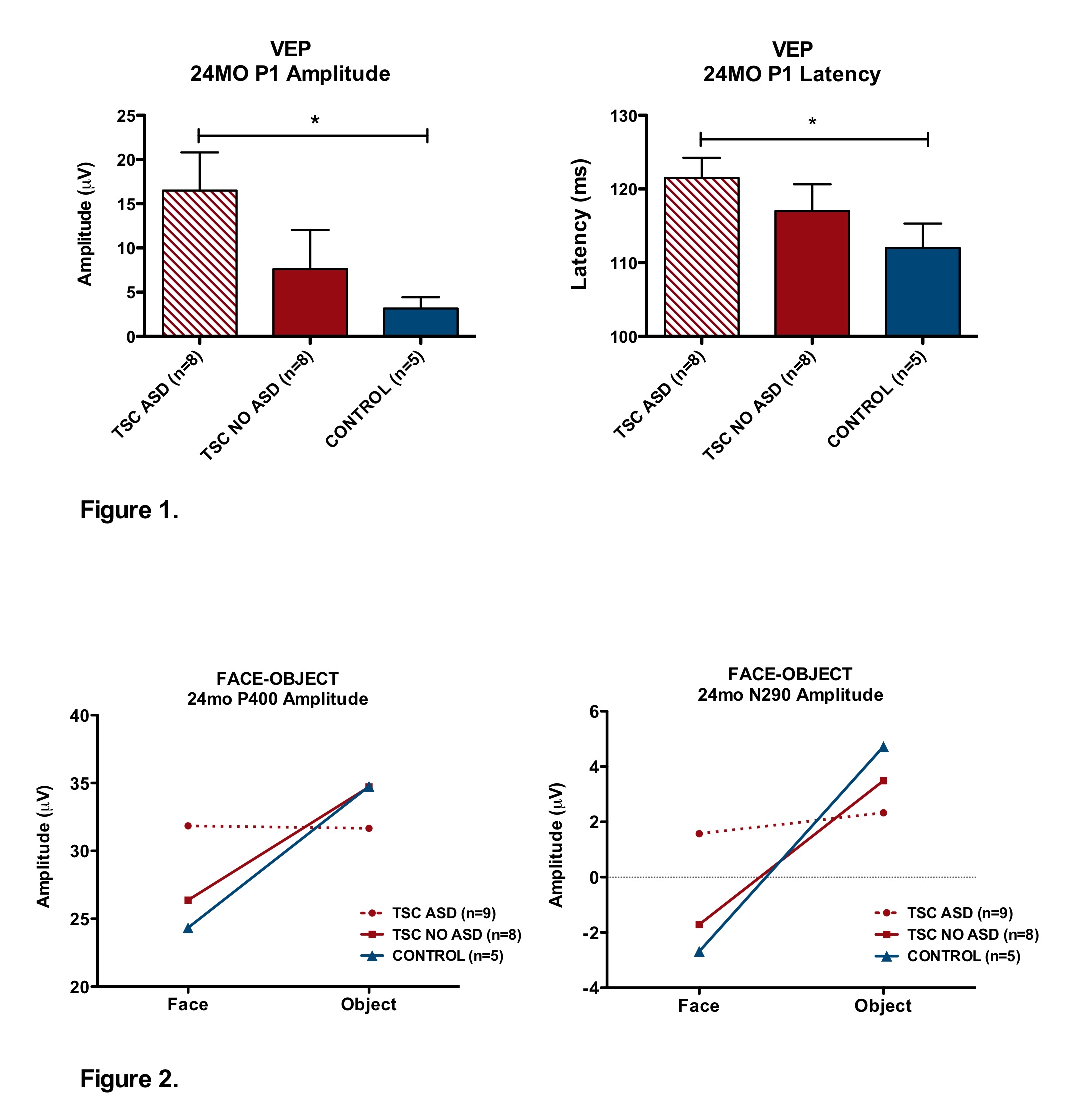