Objectives:  The objective of this study was to see if a Summer Robotics Camp supported the social/vocational development of individuals with ASD through:  (1) a decrease in social anxiety, (2) an increase in social performance, and (3) an increase in robotics knowledge.  The camp was designed to focus on the intrinsic interests of participants, rather than their social difficulties.

Methods:  Participants were 25 individuals with ASD and 27 typically developing (TD) peers, ages 10-17, who received general education science instruction at school, and who expressed an interest in robotics.  DSM-5 ASD diagnoses were independently confirmed using the ADOS-2, SCQ-L, and clinical judgment by a trained clinician.  Participants completed a weeklong summer camp during which they learned robotic facts, actively programmed an interactive robot, and learned career skills (e.g., how to work collaboratively).  While programming, participants worked in pairs (each ASD participant was paired with a TD peer) on a programming project that culminated in a presentation in front of campmates and family.  Pairs were matched on robotics experience and age.  Social/vocational training was given to all participants, regardless of diagnosis, and participants were not labeled as having an ASD.  Pre- and post-treatment data were collected on participant-reported levels of social anxiety (Social Anxiety Scale), parent-reported social skills (Social Skills Improvement System), and a test of participants' knowledge of robotics.  In addition, at pre- and posttest, participants were recorded during a novel social situation in which they interacted with a participant from a different week of camp who they had just met.

Results:  A series of paired samples t-tests were conducted to compare the baseline data with posttest data.  For both groups, there was a significant improvement on measures of social anxiety and robotics knowledge (see Table 1).  On the total scores of parent-reported social skills, the ASD group reported a significant improvement (p = .01); TD group did not (p = .31), although it should be noted that the TD peers came in with above average parent-reported level of social skills.  Data will also be presented on pre- and posttest differences in performance during novel social situations.

Conclusions:  These results provide support for the effectiveness of a summer robotics camp at decreasing social anxiety, increasing social skills, and improving knowledge of science and robotics in adolescents with ASD.  TD peers also showed specific gains in robotics knowledge and lower social anxiety at posttest.  Future research should examine factors that contribute to improvement and include non-treatment control conditions. 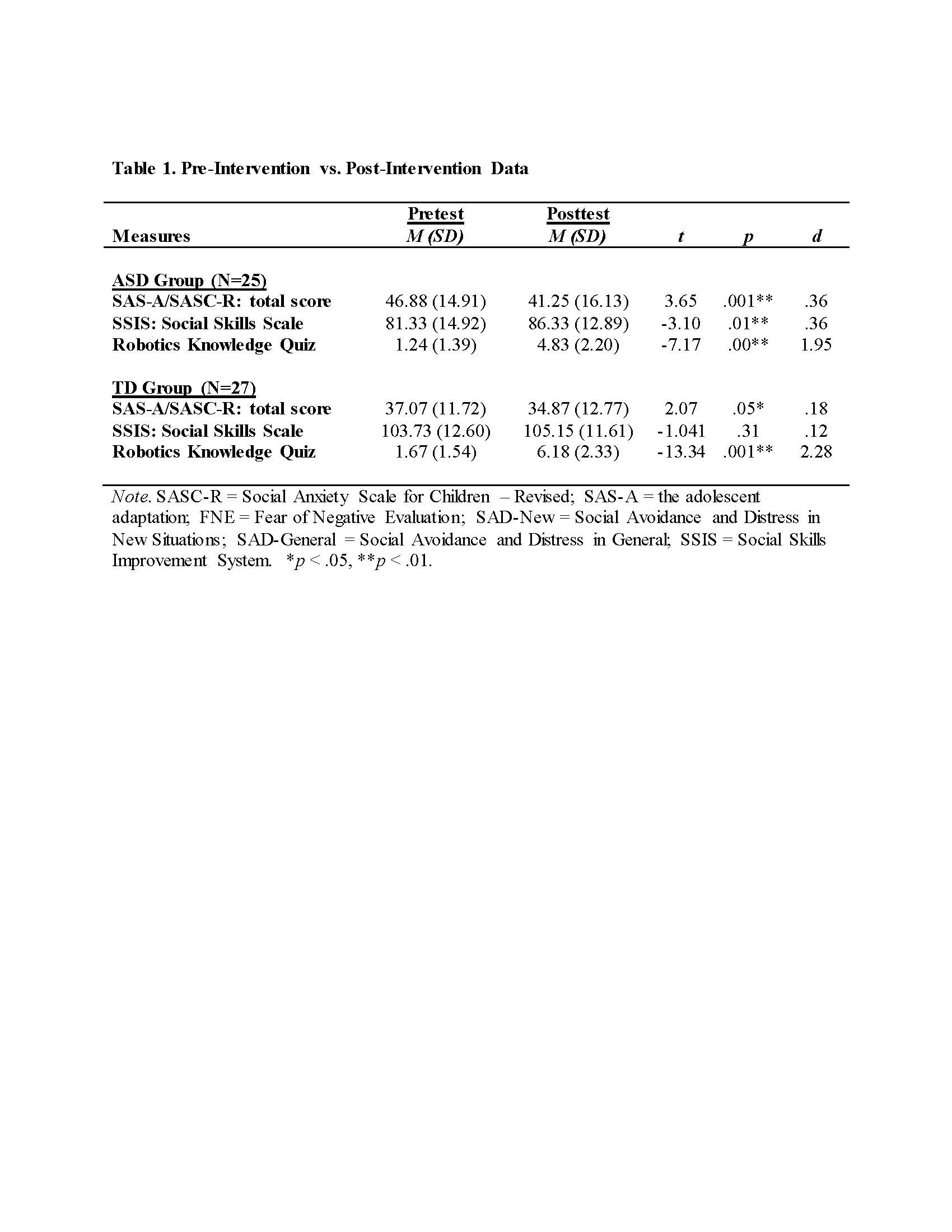