Objectives:  This study evaluates parent-reported ASD and other comorbid disorders in a nationally representative sample of U.S. adolescents to estimate and compare the prevalence and risk of medical and psychiatric comorbidity among ASD youth with and without comorbid LD compared to their typically developing peers.

Methods:  The sample included adolescents aged 13-18 who participated in the National Comorbidity Survey – Adolescent supplement (NCS-A) whose parents answered a self-administered questionnaire concerning their child’s lifetime health and development, including ASD and LD status (N=6,295).  The NCS-A is a nationally representative household survey of adolescent mental health in the US.  Participants were recruited between 2001 and 2004.  ASD, LD, and status of 9 medical conditions were evaluated by parent report.  Psychiatric disorder status was derived from both adolescent interview and parent report and grouped into six categories.  Adjusted odds ratios (aOR) were estimated using multivariate logistic regression adjusted for age, sex, race/ethnicity, and household income.  All estimates were weighted to represent the national population of adolescents at the time of recruitment and were evaluated at a 95% confidence level.

Conclusions:   Overall prevalence and comorbidity between ASD and LD in the NCS-A is similar to other population-based estimates, with a majority of ASD adolescents also having LD. ASD subgroups with and without LD reveal distinct patterns of comorbidity, possibly indicating different biological underpinnings as well as health and social service needs.  Increased risk for allergy was specific to ASD.  However, increased risk for GI and seizures, two medical conditions thought to be etiologically related to ASD, spanned all affected subgroups, suggesting an overarching neurodevelopmental component to this risk not specific to ASD. These findings highlight the importance of comprehensive multidisciplinary evaluation of youth with ASD. 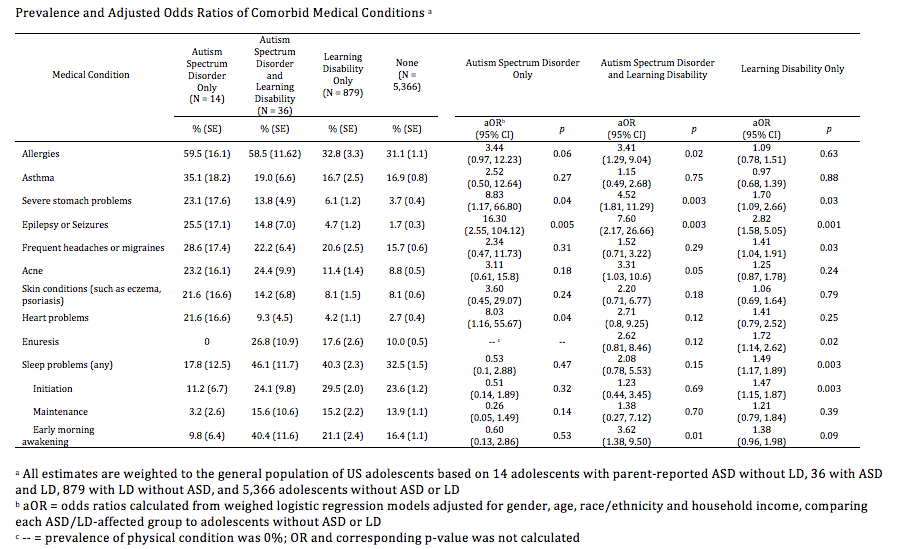