Abnormal connectivity is a key component of the neural basis of ASD. Current evidence suggests that both under-connectivity and over-connectivity may be characteristic of the autism phenotype. Less is known about dynamic changes in the timing of network configurations in ASD and the integrity of large-scale physiologic systems in individuals with ASD of lower cognitive ability (LCA).

2)      Investigate the impact of light sedation on network dynamics and the limitations/potential of this methodology.

3)      Investigate the relationship between network dynamics and autism severity.

Three resting state fMRI scans were collected on 13-15 year olds; a subset of participants were scanned under propofol sedation. To address the role of cognitive functioning, we ran three contrasts with groups matched on age and IQ: HCA vs typically developing (TD), HCA awake (non-sedated) vs HCA sedation, and LCA vs developmentally delayed (DD) (all sedated). Participants scanned while alert were instructed to close their eyes. Scans were preprocessed using a standard approach. We performed a novel dynamic analysis as follows. We selected MNI coordinates identified in the literature as nodes in the default mode network (DMN), dorsal attention network (DAN), fronto-parietal task control network (FPTC), and “salience” network (SAL). For each coordinate we extracted the signal from a 10mm sphere. These timecourses were submitted to an exploratory factor analysis in a structural equation modeling framework to identify factors (networks) with identical structure in each contrast separately. The individual scores for each network for each subject were used as regressors in a voxelwise univariate general linear model (GLM) in FSL. This allowed us to compare the time-varying expression of networks across groups with respect to each other (i.e., as correlations of expression) and with respect to other un-seeded networks (via GLM).

Sedation affected both cortical dynamics and functional connectivity. The contrast between awake and sedated individuals with ASD showed higher correlations (suggesting poorer independence) between the attention networks and lower correlations between the SAL and the DAN in sedated compared to awake individuals. Dynamic connectivity analyses showed predominantly higher correlations in HFA compared to TD in networks involved in attention and introspection. Further, the correlation between the DAN and FPTC is correlated with ADOS symptom severity (r(4)=.933, p=.006) and is higher in all HFA participants than controls. No group differences in dynamics were observed between the LCA group and the DD group, although in the GLM analyses, LCA showed higher connectivity in occipital, cingulate, and frontal regions and lower connectivity in the temporal lobes and thalamus (see Figure 2).

Conclusions:  Large-scale brain system alterations are observable in individuals with ASD with both higher and lower cognitive abilities. Dynamic connectivity approaches are highly sensitive to diagnostic status and individual differences in autism severity. However, they may be less sensitive for identifying abnormal network dynamics when participants are scanned under sedation, because sedation itself appears to lower differentiation of networks and reduce network expression. 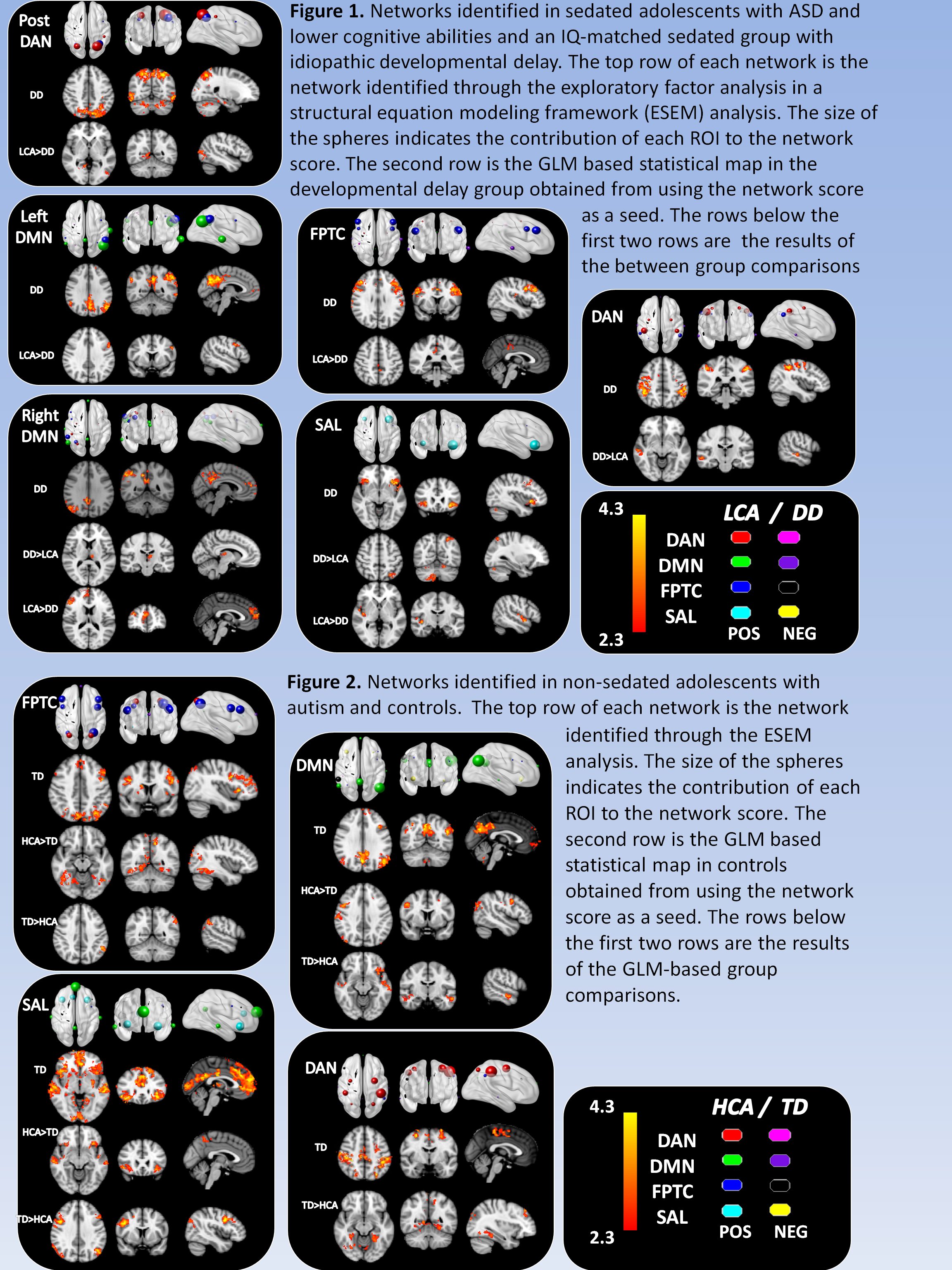