Traditionally, families of children with autism spectrum disorder (ASD) have had difficulty obtaining coverage for ASD services.  The challenges in identifying, accessing, navigating and paying for ASD services can place a substantial burden on parents and caregivers of children with ASD.  In response, several states have expanded Medicaid coverage for children with ASD through 1915(c) Home and Community-Based Services (HCBS) waivers.  However, these waivers vary considerably across states, and little is known about their effectiveness in reducing family burden.

In this study, we use detailed information about HCBS waivers for ASD across all states, combined with national survey data, to examine the effects of the waivers on the perceived level of unmet need among families of children with ASD.  Our goal was to determine which characteristics of these waivers appear to be most effective at reducing unmet need.

We combined data from multiple waves of the National Survey of Children’s Health and the National Survey of Children with Special Healthcare Needs with state-level data we assembled regarding characteristics of Medicaid HCBS waivers from 2000 through 2013, extracted from source materials that were submitted by states in their wavier applications. Unmet need was defined across surveys by combining questions that probe for difficulties in receiving needed care.  Key HCBS waiver measures included (1) expected annual cost per enrollee, (2) annual cost limit per enrollee, (3) enrollment limit, and (4) whether the waiver specifically targeted ASD or broader developmental disabilities. With the exception of the ASD targeted measure, which is dichotomous, we normalized each of the policy variables to have mean=0 and standard deviation=1 within the sample to ease interpretation of results. We then used multivariable logistic regression in a difference-in-difference design that exploited differences in HCBS waivers within states over time to identify effects for children with ASD relative to children without ASD (controls) to characterize the relationship between unmet needs and waiver characteristics, controlling for other covariates. To examine robustness, we estimated the model using several different samples, including (1) all children, (2) children in families with income < 200% FPL, (3) all children in Medicaid, and (4) children in Medicaid living in families with income < 200% FPL.

We identified a total of 370,193 children, of whom 8,218 had ASD. The multivariable logistic regression results show that each of the waiver policies was associated with reductions in rates of unmet needs for children with ASD relative to children without ASD, and that the associations were stronger in samples limited by income and by Medicaid enrollment status. For example, 1 standard deviation increases in the cost limit and the enrollment limit were associated with ORs of 0.63 (p<.001) and 0.53 (p<.001), respectively, in the sample limited to Medicaid-enrolled children in families with income <200% FPL.

Medicaid HCBS waivers have reduced unmet need among children with ASD.  The characteristics of those waivers, however, are important.  Our results will be useful to policymakers as they consider policies to improve access to care for children with ASD. 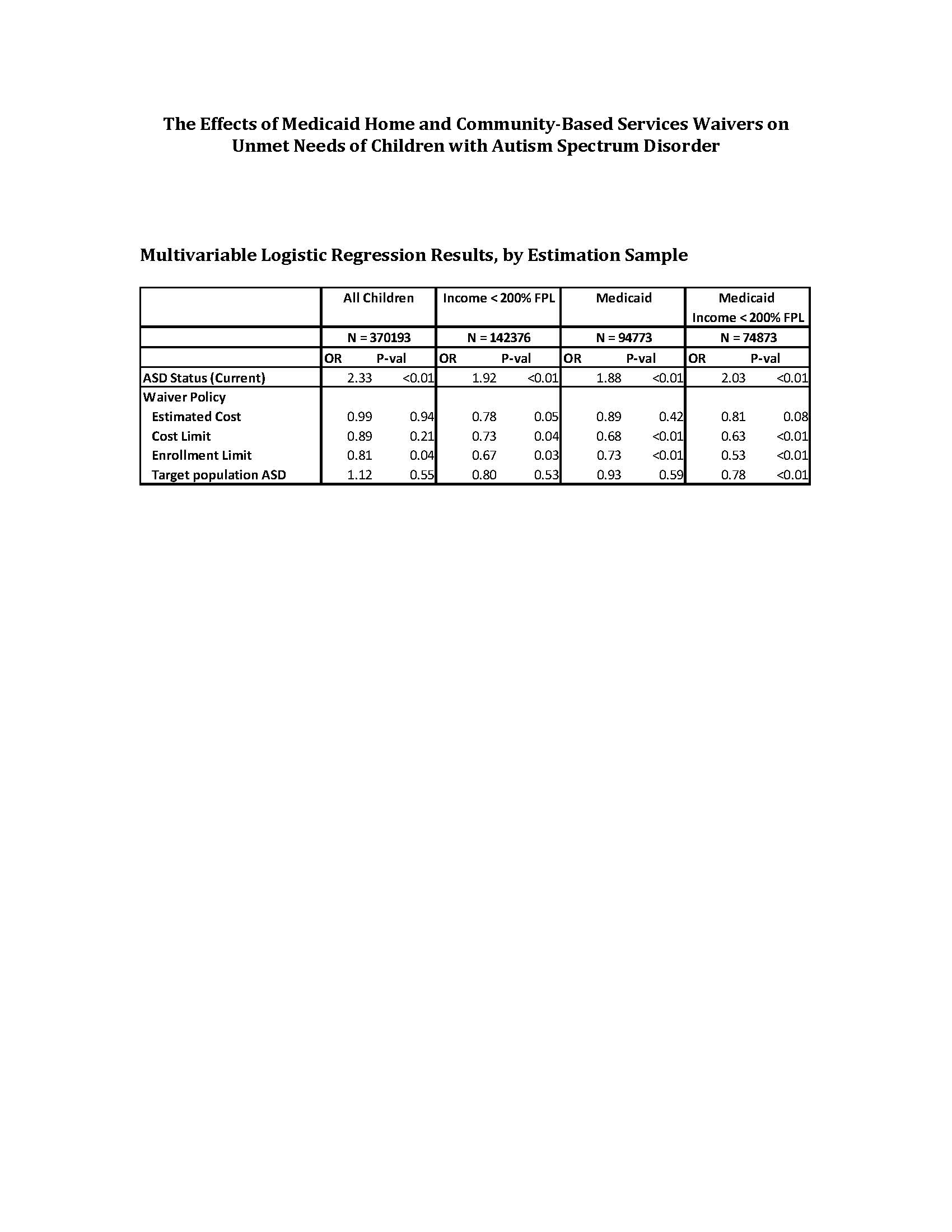