20301
EEG Coherence: A Potential Predictive Neonatal Biomarker for Identification of Autism Risk and Prediction of Severity in 30 Month Olds

Objectives:  We sought to study EEG long-distance connectivity in the newborn period as measured by inter-hemispheric EEG coherence to determine if this biomarker might serve to identify infants at risk of autism and predict the severity of autistic features at outcome.

Methods:  Thirteen pregnant women who were mothers of at least one child with an ADOS +/- ADI-R confirmed clinical diagnosis of autism spectrum disorder (ASD) were recruited and followed through delivery.  Their newborn infant (InfSib), at high risk of autism by virtue of being a sibling of the autistic proband, was followed prospectively from birth to 30+ months of age.  Appropriate institutional approvals and consents were obtained.  In the newborn period, ~ 42 weeks gestational age, high-density sleep EEG was collected in the InfSib.  Neonatal sleep EEG coherence in the high risk InfSib was compared to a low risk age-matched normative data set (CHIME controls).  InfSib developmental outcome measures at ~30 months of age, including the Pervasive Developmental Disorder-Behavorial Index (PDD-BI), were collected and analyzed for correlation with newborn sleep EEG coherence.

Results:  Twelve of the 13 recruited mothers gave birth to live infants.  Eleven had adequate neonatal sleep record at 42 for analysis and nine have outcome data at ~30 months.  As a group, the CHIME controls showed coherence in active and quiet sleep in frequencies below 10 Hz with the highest coherence in the delta band, whereas coherence was significantly lower in the same frequencies in the high risk InfSibs group (p<0.01 at 2 Hz).  Further, behavioral outcome in the InfSibs based on the Autism Severity Composite of the PDD-BI showed a strong negative correlation with the betaband EEG coherence measured in the neonatal period (r-value: - 0.77, p=0.02 at 26 Hz).

Conclusions:  Long distance connectivity in the newborn period as measured by inter-hemispheric EEG coherence is a promising biomarker for identifying neonates at increased risk of developing an ASD.  Further, our data suggest that decreased functional connectivity in the neonatal period may predict severity of autistic behaviors in two year olds.  Sleeping EEG coherence in the newborn period should be further explored as a potential biomarker of autism risk and severity and may offer insight into the neurobiology and ontology of autism spectrum and related disorders. 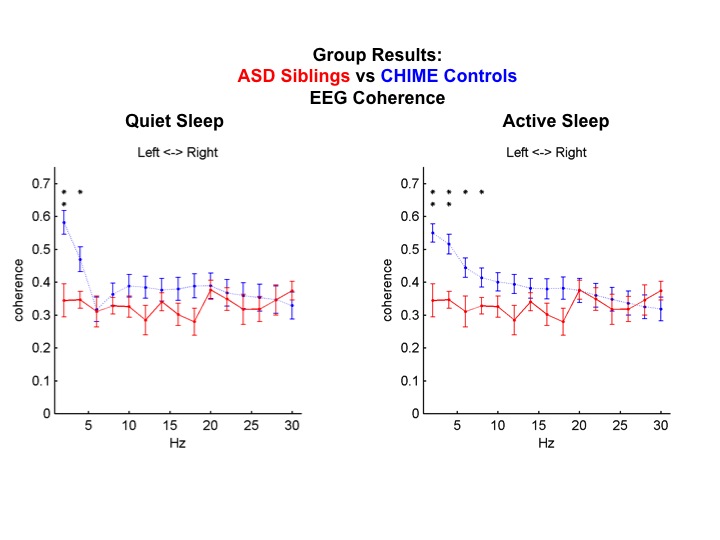