20619
Neural Predictors of Treatment Response to Social Skills Training in Children with Autism—Findings from a Randomized, Comparative Study

Objectives: This study examined whether baseline brain activity was associated with response to social skills group treatment in the context of a randomized, comparative trial. A CBT approach was compared with a child-directed play group.

Methods: Verbally fluent children with ASD, 8-11 years of age, were randomized to the CBT or comparison group. Both treatments consisted of 12 weekly 90-minute sessions (4-6 children in each group) with a parent component. The CBT treatment addressed 3 skill areas: Nonverbal communication, Emotion recognition, and Theory of mind Training (Seaver NETT). Behavioral assessments and fMRI were conducted at baseline, end of treatment, and at a 3-month follow up. While undergoing fMRI, children viewed images of emotionally expressive faces depicting anger, fear, disgust or a neutral expression. Faces displayed either a direct or averted gaze.  Regression analyses were conducted to evaluate the relationship between baseline brain activity and changes in social cognition and behavior.

Conclusions: Overall, these results show that baseline activity in the FG was associated with children who demonstrated the greatest improvement in measures of social awareness and social cognition following treatment. The FG is a key “social brain” region associated with face processing, particularly in the right hemisphere. Previous studies have found that right FG activity is associated with less severe social impairment in individuals with ASD. These findings could suggest that children who exhibit a more typical neural response to faces at baseline may be more likely to show improvement following social skills groups, both CBT-based and more child-directed approaches. However, the clinical significance of these findings is limited given that neither group showed significant increases in social awareness or social cognition following treatment; findings should be taken with caution. This study is a first step toward identifying potential predictors of treatment response—an essential goal of ASD research, as elucidating biomarkers may facilitate the development of tailored interventions and promote positive treatment outcomes. 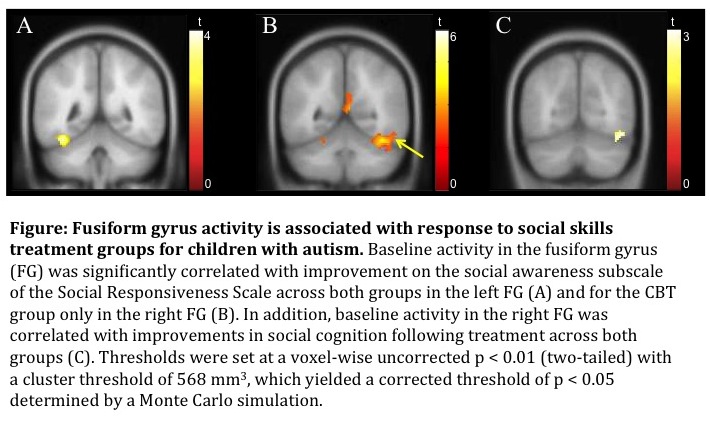