20944
Phenotypic Plasticity in the Cingulate Cortex in Autism Spectrum Disorders: Target on Etiology?

Objectives:  The purpose of this study was the detection of a possible secretion pattern of specific neurotransmitters in the cingulate cortex in adults with Autism Spectrum Disorder.

Methods:  In this case-control study, in vivo single-voxel proton magnetic resonance spectroscopy signals (1H-MRS) were recorded in 12 right-handed young adults with ASD (median age, 22 years ± 2.2), and 19 typically developing (TD) controls (mean age, 22.80 ± 3.25) who were well matched for age, IQ and different AQ score groups: (AQ1=0-10; AQ2=11-22; AQ3=23-31) and AQ4=32-50. The diagnosis of autism was established by a neurologist, psychiatrist and psychologist in every case. The Autism Spectrum Quotient (AQ) designed by Baron-Cohen et al., 2001 to assess Autistic Spectrum traits in intellectually competent adults in both the general population and the Autism Spectrum community. Imaging was performed on a 3.0-T scanner using a single-voxel point-resolved spectroscopy technique. The volume of interest (VOI) was located in the anterior and posterior bilateral cingulate cortex. The absolute concentrations of creatine + phosphocreatine (Cr+Pcr), N-acetyl-aspartate (NAA), N-acetyl-aspartate+N-acetyl-aspartyl-glutamate (NAA+ NAAG), N-acetyl-aspartyl-glutamate (NAAG), glycerophosphocholine + phosphatidylcholine (GCP+PCh), myo-inositol (mI), glutamate (Glu) and glutamate+glutamine (Glu+Gln) were processed by the LC Model 6.2-3A.

Results:  A significant increase glutamate + glutamine (Glu+Gln) was observed, F=20.77; t= 4.73, in the subject group with AQ3 = 23-31 between the bilateral anterior cingulate cortex (ACC) and the posterior bilateral cingulate cortex (PCC).   While, this group (AQ3 = 23-31) showed a significant increase in the level of glutamate (Glu) in the anterior cingulate cortex (ACC), F=23.43; t=4.06, compared with the control group (AQ1=0-10). One-way ANOVA and Bonferroni's Multiple Comparison Test. P < 0.05 were applied to perform the statistical analysis.

Conclusions:  The presence of an imbalance in the glutamate (Glu) system between the anterior and posterior cingulate cortex was apparent in the ASD group with AQ3 = 23-31. The elucidation of the etiology of this difference in this brain region studied in autism spectrum disorders is and will be a research goal for our team. 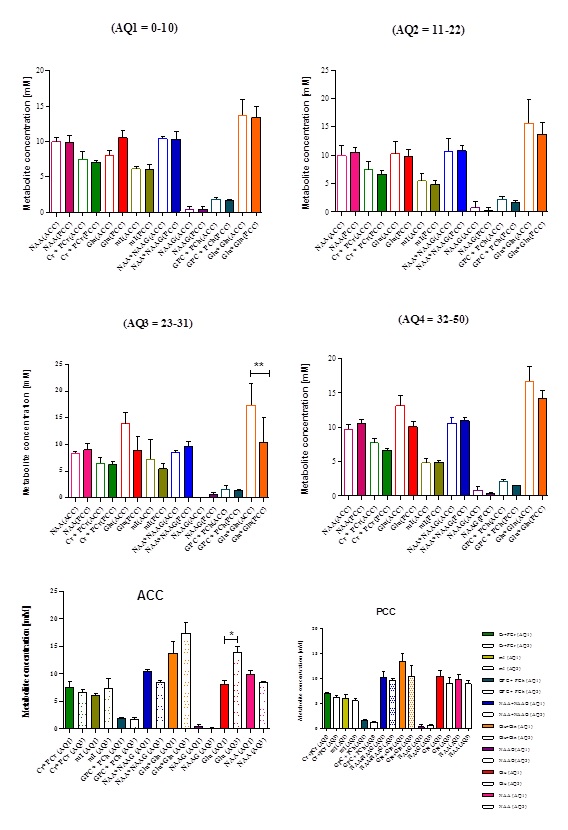