Caring for a child with autism spectrum disorder (ASD) is stressful and tends to be particularly high during transition points, such as receiving the initial ASD diagnosis (Evan, 2010).  However, there is little research examining the diagnostic process comprehensively (Braiden et al., 2010). Additionally, the existing literature about the diagnostic process suffers from four main problems; most studies (1) were small in scale, (2) were conducted in countries other than the United States (e.g., Abbott, Bernard, & Forge, 2012), (3) were retrospective (see Brogan & Knussen ,2003), often occurring years after the initial diagnosis; therefore, introducing potential biases in recall, and (4) used either exclusively qualitative or quantitative methods, which poses limitations on the depth and breadth of understanding the diagnostic stages when compared to mixed method designs (see Abbott et al., 2013).

To develop a model that attempts to give a detailed account of the sequence of events, experiences, and actions associated with the ASD diagnosis. It is hoped that this model will provide additional guidance to offer timely support to parents and improve the diagnostic experience for families of children with ASD.

A mixed methods cross sectional design was used. Eighty caregivers of children with ASD who received an initial diagnosis within the past six months completed a set of measures regarding their diagnostic experiences.

The caregiver was most frequently reported to be the first person to suspect a problem with their child (69.2 %). In most cases (87.2%), language delay was the initial cause for parents’ concerns. The mean time between first concern and diagnosis was 28.72 months (SD=27.12), however, more than 10% of parents experienced a lapse longer than 4 years. Length of diagnostic lag was unrelated to ASD severity (r = -.06, p >.05). On average, parents reported consulting with 3.33 (SD=1.26) professionals before receiving an ASD diagnosis. Pediatricians (55.13%) and psychologists (41.02%) were most frequently consulted. However, across professionals, pediatricians and general physicians were reported to be most likely to neglect early ASD symptoms and least likely to refer parents to appropriate professionals.

Grounded theory was used to analyze the qualitative responses with regard to parents’ experience during the prediagnostic and diagnostic process. Six core themes were identified: “heightened awareness,” “initial search,” “dissatisfaction with medical or associated processionals,” “long process/delay,” “feeling uninformed,” “parent psychological and relational experiences,” and “diagnosis goals.” When participant responses were viewed as a whole, a set of commonly experienced steps or stages emerged that seemed to characterize the process of obtaining a diagnosis.

The authors adapted the patients’ health seeking model by Andersen and Cacioppo (1995) to understand the present data. A six-stage model  (i.e., appraisal delay, illness and information delay, behavioral delay, scheduling delay, diagnostic delay, and treatment delay) was developed to capture and understand the prediagnostic and diagnostic experiences of children with ASD and their parents. See Graph 1 for the model. Implications and potential interventions based on the six-stage model will be discussed in the presentation. 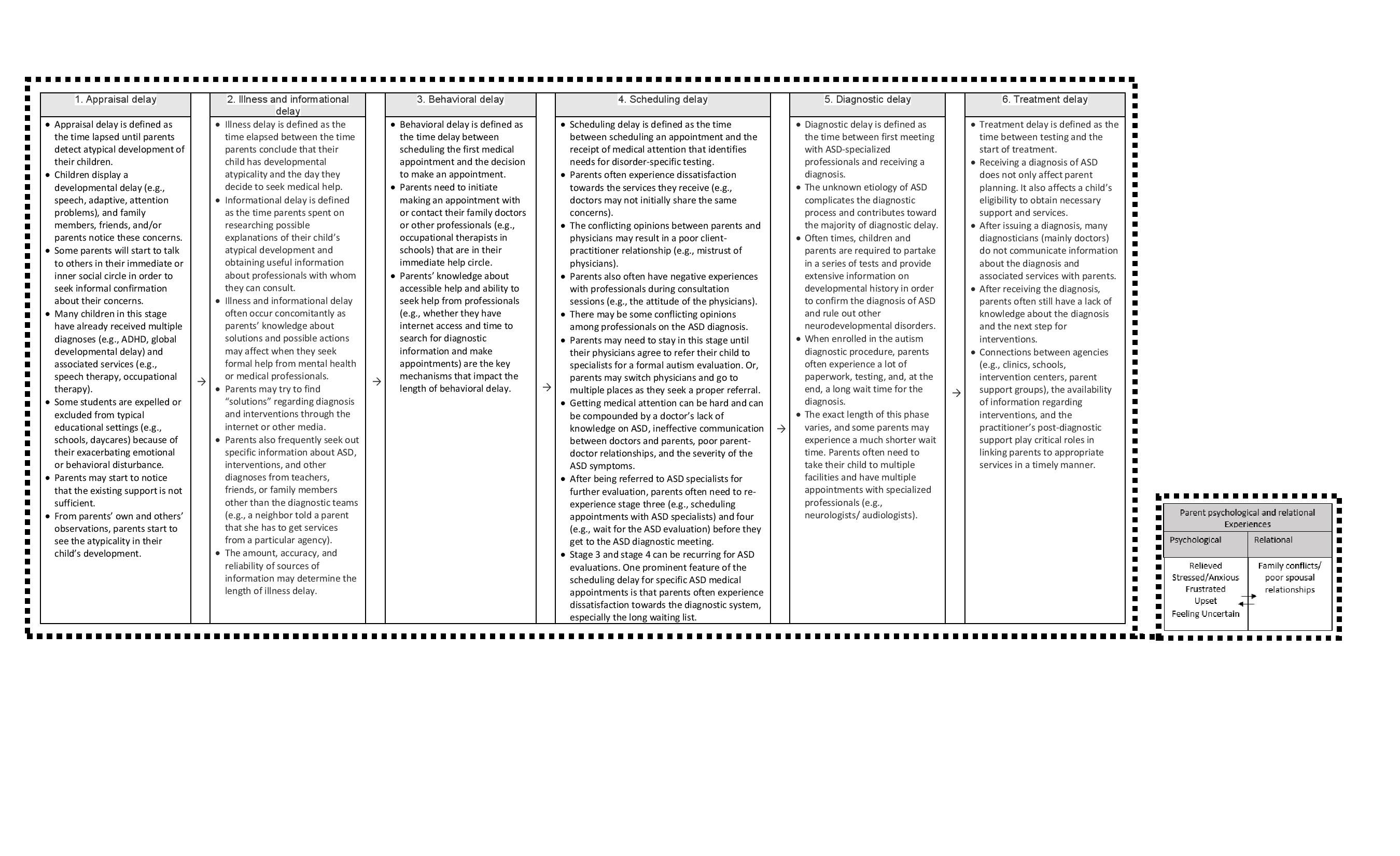