Hall A (Baltimore Convention Center)
B. Stamova1, B. P. Ander1, F. R. Sharp1 and C. M. Schumann2, (1)Department of Neurology, University of California, Davis, School of Medicine, Sacramento, CA, (2)UC Davis MIND Institute, Sacramento, CA
Background:  Autism spectrum disorders (ASD) are more common in boys than girls. The bases for sex differences in ASD are poorly understood. It is theorized that higher etiologic load, including genetic and/or environmental load, is needed for females to develop ASD. Though sex differences in ASD neuropathology have been reported, sex differences in ASD brain transcriptomes remain largely unexplored. Male and female ASD subjects could have different molecular mechanisms for normal regional patterning in the brain which could contribute to sex differences in ASD. Thus, we investigated differential expression of small non-coding RNAs (sncRNA, including microRNA) in the superior temporal gyrus (STG) of male and female brains of ASD compared to typically developing (TD) controls. We investigated the superior temporal sulcus (STS) and primary auditory cortex (PAC) within the STG. STS is an association cortex involved in social perception, joint attention, face perception and speech perception and is implicated in ASD. PAC is a primary sensory cortex modulating auditory processing.

Objectives:  To assess sncRNA expression in STS and PAC in postmortem male and female human brains of ASD compared to TD controls.

Results:  We found sexually dimorphic sncRNA expression in the ASD postmortem brain, with a higher number of sncRNA being dysregulated in females compared to males (Fig.1). There were 27 sexually dimorphic sncRNA in ASD STS (7 in male and 20 in female), 9 in ASD PAC (2 in male, 7 in female), and 71 regionally dysregulated (between STS and PAC) (31 in male, 39 in female, and 2 common) (Fig. 2). The predicted mRNA targets of the mature miRNAs are over-represented in different pathways in male and female in STS and PAC. Axonal Guidance Signaling was the most over-represented canonical pathway in the regionally dysregulated (STS vs PAC) mature miRNAs both in male (FDR-corrected p=3.1E-12) and female (FDR-corrected p=2.4E-09). However, most of the predicted dysregulated target mRNAs were different in males compared to females. A number of predicted targets have been implicated in ASD, such as MET (in female), NTRK3 (in male), and SHANK2 (in both). 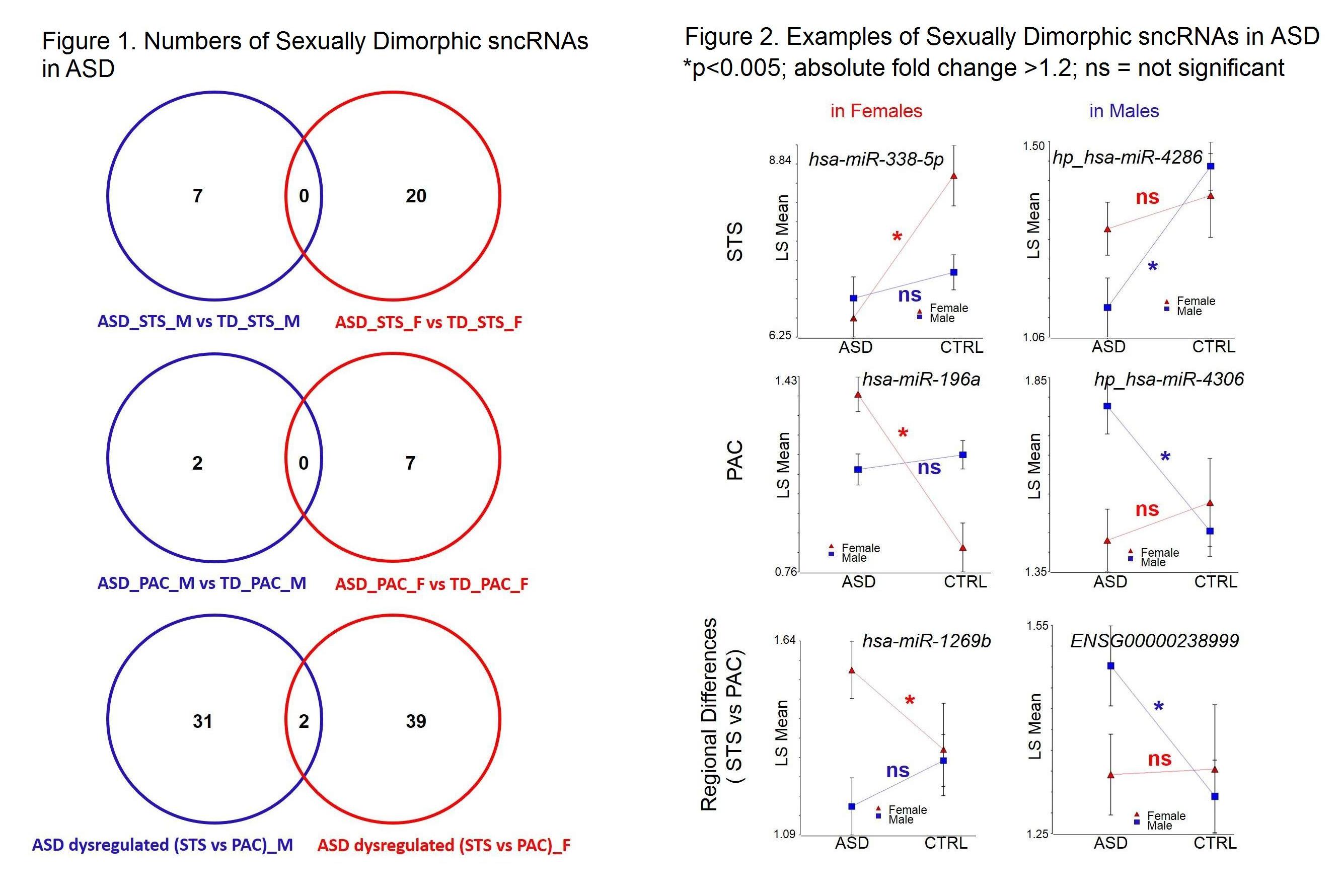