This study aimed to develop and evaluate novel, short-term, online training sessions to improve selective visual attention and emotion identification in young adults with a wide range of ASD behaviors. Changes in task performance over time were assessed, as were potential differences between participants with a clinical autism diagnosis and a group of non-diagnosed individuals with high or low degrees of autistic behaviors.

Fifty-four individuals (28 males; Mage = 19.73) completed the training sessions. Autistic behaviors were assessed with the Autism Quotient (AQ; Baron-Cohen et al., 2001). Seventeen individuals clinically diagnosed with ASD were recruited from the autism clinic at a local medical school (MAQ = 26.50; SD = 3.93). The remaining participants were recruited from a small liberal arts university, 20 of whom reported autistic traits in the clinical range (MAQ = 30.14; SD = 4.38) and 17 who reported few autistic behaviors (MAQ = 9.47; SD = 2.52). The training strategies included eight online sessions completed over the course of three weeks. The training sessions included: 1) an oddball task that trained participants to press a key on some trials while refraining from responding on others, 2) a classic Stroop task, 3) a task training participants to identify the emotions of faces varying in the ambiguity of the emotion, 4) a task that trained participants to switch between identifying emotions on faces and identifying the color of the backgrounds behind the faces, 5) an antisaccade task training participants to identify emotion faces on either side of a screen, and 6) a task in which participants were trained to identify the emotions displayed by faces in which only the eyes were presented.

These data indicate that an online intervention using a complex task involving the recognition of emotions might improve the ability of diagnosed individuals or those who report high levels of autistic behaviors to recognize emotional expressions. 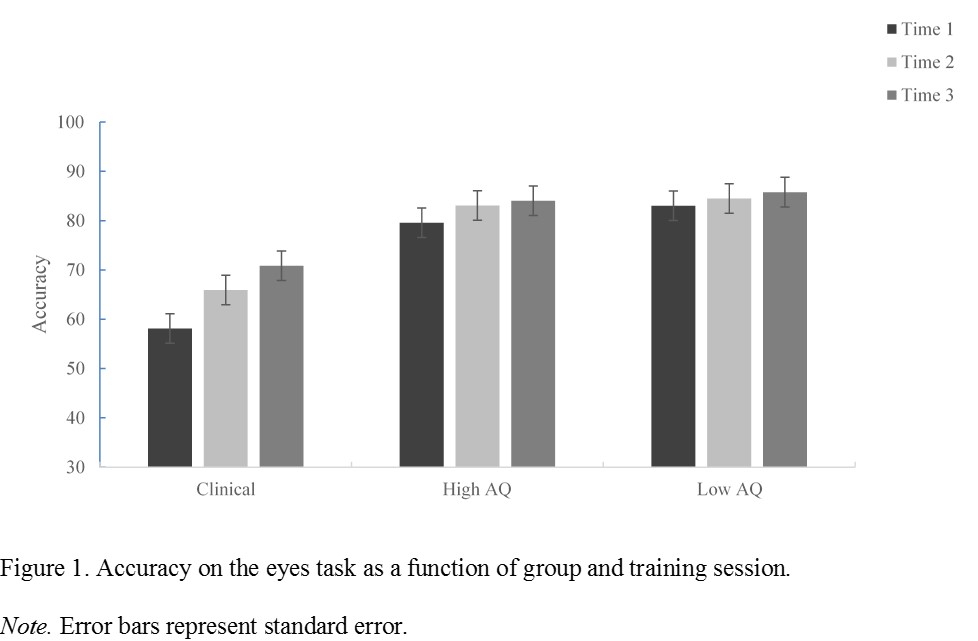