21094
Implicit Vs Explicit Attitudes Towards Individuals with Autism

Hall A (Baltimore Convention Center)
J. Zeman1, C. Dickter2, J. Burk2 and J. A. Kittel1, (1)College of William and Mary, Williamsburg, VA, (2)College of William & Mary, Williamsburg, VA
Background: Given the strengths and challenges associated with ASD, it is not surprising that some studies demonstrate that individuals with ASD are perceived negatively, whereas other research suggests positive perceptions (Swaim & Morgan, 2001). Most research has relied on self-report which is effective at evaluating explicit attitudes but is susceptible to social desirability biases. To better characterize the attitudes towards members of social groups, it is important to study both self-report and implicit measures because each method predicts different types of behavior. Due to the difficulties that may pose disproportionately greater challenges for students with ASD as they enter higher education (e.g., increased opportunity for social interactions, changes in daily routines; Lai et al., 2014), we focused on college students.

Objectives:  The goal of this study was to address gaps in the literature by assessing college students’ implicit and explicit attitudes towards people with ASD. We evaluated: (a) implicit and explicit attitudes toward individuals with ASD, (b) the relation between the two variables, and (c) whether attitudes would vary depending on the degree to which students self-reported autistic behaviors.

Results:  There was an overall implicit bias against individuals with autism (d = -0.83, SD = 0.41), t(177) = -27.09, p < .001, suggesting that participants had more positive implicit associations with neurotypical compared to autistic individuals. For explicit attitudes, the means for the Knowledge subscale (M = 15.16, SD = 2.20) and Personal Distance subscale (M = 17.25, SD = 2.70) were similar to other college samples (Flood et al., 2012). Regarding the relations between implicit and explicit attitudes, there were significant positive correlations between the IAT and the Knowledge subscale, marginally positive significant relations with the Total SATA score and the Personal Distance subscale, and no significant association with the Social Attitudes Scale (see Table 1). The IAT was significantly positively correlated with the total AQ score, the AQ Social Skills subscale, and the AQ Communications subscale. Students scoring in the top third of the total AQ demonstrated less implicit bias than those in the bottom third. This pattern was replicated for the Social Skills and Attention Switching subscales (see Table 2). Thus, students reporting more autistic behaviors held less implicit bias towards those with autism.

Conclusions:  We created the first IAT to measure students’ implicit associations with neurotypical and neurodiverse individuals.  Our sample appeared to be somewhat knowledgeable and hold relatively positive explicit attitudes towards individuals with ASD compared to the sample norms, but generally held an implicit bias against individuals with autism, except by those reporting autistic traits themselves. 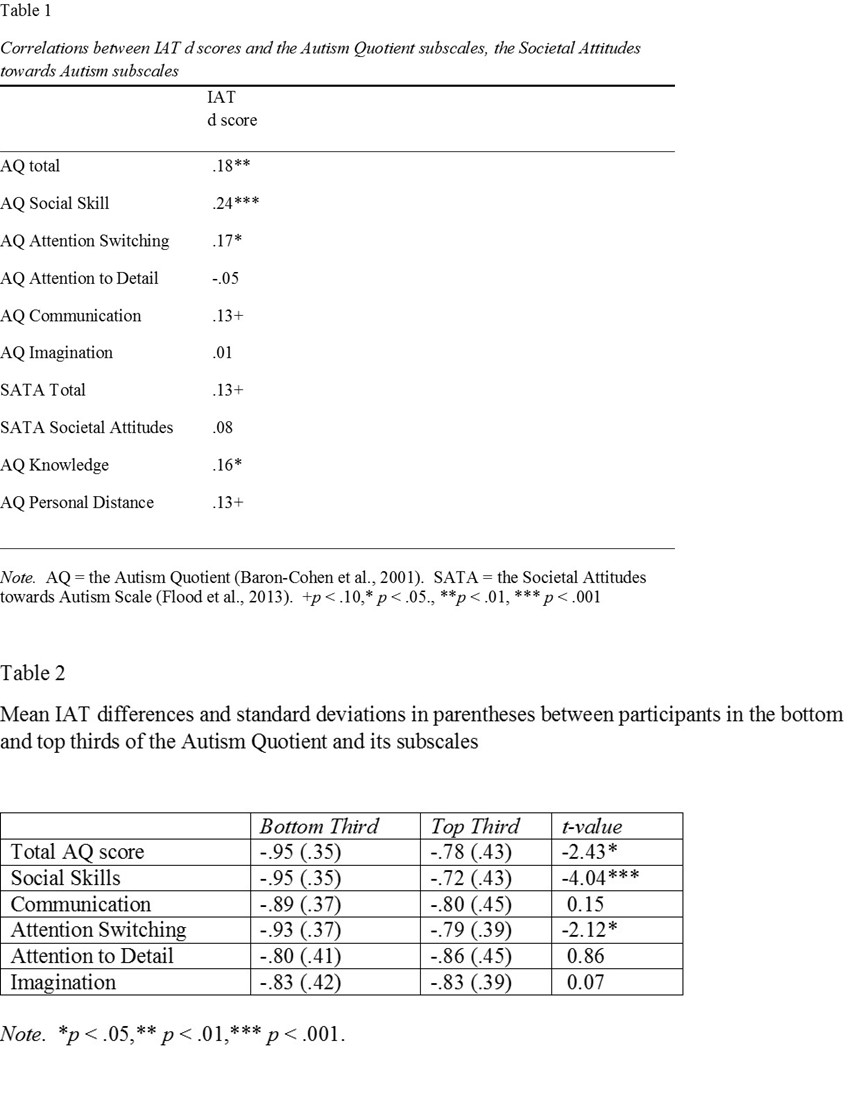