21143
Multicausal Systems Ask for Multicausal Approaches: A Network Perspective on Subjective Well-Being in Individuals with ASD

Hall A (Baltimore Convention Center)
M. K. Deserno1, D. Borsboom2, S. Begeer3 and H. M. Geurts1, (1)Dutch Autism & ADHD research center (d'Arc) Dept of Psychology, Brain and Cognition, University of Amsterdam; Dr. Leo Kannerhuis, Amsterdam, Netherlands, (2)Department of Psychology, University of Amsterdam, Amsterdam, Netherlands, (3)VU University Amsterdam, Amsterdam, Netherlands
Background: Recent literature has highlighted the need to accommodate the multifactorial nature of antecedents of subjective well-being in Autism Spectrum Disorder (ASD) populations, as it is unlikely that there could be a single element of ASD that predicts well-being in all cases. Despite a large body of research identifying specific predictors of positive outcome, the predictive utility of such measures still differs in unanticipated ways and the mechanisms by which these factors may influence outcome for individuals with ASD remain poorly understood. These results suggest that we need further understanding of the multivariate framework in which variations in the combination of risk and protective factors contribute to individual differences in later outcome. Above all, given the vast heterogeneity within the ASD population, an important limitation of ASD research is that outcome measures are statistically modeled as separate dependent variables.

Objectives: The current study aims to lift this limitation, by providing the first assessment of a network structure risk and success factors relevant to subjective well-being in individuals with ASD.

Methods: We used network analyses to explicate the multivariate association pattern of potential risk and success factors taken from 27 life domains in 2341 individuals with ASD (aged 2 to 90). We assessed the centrality of specific life domains as well as their importance for well-being. Centrality is a metric that indicates the overall connectivity of a variable in the network.

Results: We identified social satisfaction and societal contribution to be the strongest direct paths to subjective well-being (i.e., happiness), while treatment satisfaction also shows strong enhancing relations with feeling happy. Physical complaints were an important inhibiting factor for feeling happy. Factors most important in determining the network’s structure include IQ, living situation, level of daily activity, and happiness. On the other hand, we found that number of family members with ASD and openness about one’s diagnosis are least important of all factors, implying that they do not play a role in the multivariate pattern of risk and success factors for subjective well-being.

Conclusions: This study is the first to represent and analyze the multivariate network structure of factors involved in well-being in ASD. These results provide a potential roadmap for interventions and research directed at improving the well-being of individuals with ASD. 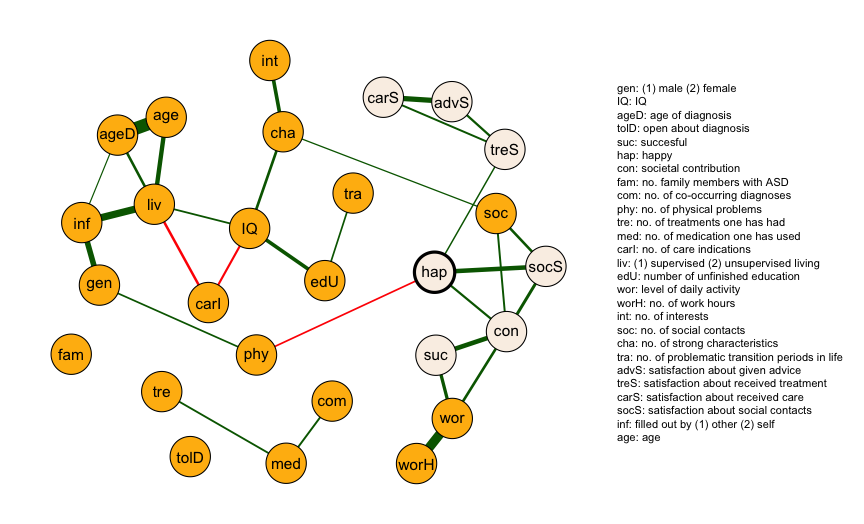