Hall A (Baltimore Convention Center)
K. B. Schauder1, W. J. Park2, O. Kwon2, D. Tadin2 and L. Bennetto1, (1)Clinical and Social Sciences in Psychology, University of Rochester, Rochester, NY, (2)Brain and Cognitive Sciences, University of Rochester, Rochester, NY
Background: Individuals with autism spectrum disorder (ASD) prefer routine and have difficulties in unpredictable situations (e.g., social interactions). Emerging theories suggest that an underlying prediction impairment may contribute to ASD (Van de Cruys et al., 2014; Sinha et al. 2014). Prediction occurs at various information processing levels, making this account appealing to understanding ASD at a mechanistic level. However, it is crucial to determine the nature and extent of this impairment empirically. One ubiquitous type of prediction that has been studied in typical development is motion prediction, which requires estimating future object position based on experienced sensory information. Real world examples include predicting when a moving car will emerge from a driver’s blind spot and knowing when to swing at a baseball. Motion prediction abilities have not yet been assessed in ASD.

Methods: 20 children and adolescents with ASD and 20 age- and IQ- matched typically developing (TD) controls completed a standard motion prediction task. Participants viewed an object that moved across the screen and disappeared behind a visual occluder; their task was to press a button when they thought the object had arrived at the visual target at the end of the occluder. Speed of object motion (10-20 deg/sec) and occluder length (0.5-20 deg) varied independently across trials, which together determined occlusion time. Mixed Model ANOVAs were used to examine effects of occlusion time and diagnostic group on three common measures of prediction ability. Constant error represents the difference between participants’ estimate and the actual time to target, with negative values representing a bias to respond too quickly. Absolute error represents the discrepancy between actual and estimated time to target contact irrespective of under- or over- estimation. Variable error is the standard deviation of the individual’s constant error, representing consistency of estimations across trials.

Conclusions: Overall, individuals with ASD did not differ from those with TD in their abilities to estimate the time to target contact of a moving stimulus, suggesting that motion prediction abilities are not generally affected in ASD. However, greater underestimation in ASD at the longest occlusion times may represent a systematic bias or particular kind of prediction deficit at occlusion times longer than one second. Ongoing analysis of eye tracking data from this task will provide additional insights into tracking strategies used to perform this task. Although prediction deficits are not robustly apparent in this nonsocial, laboratory task, future studies should examine prediction abilities in ASD in social and other higher level processing domains. 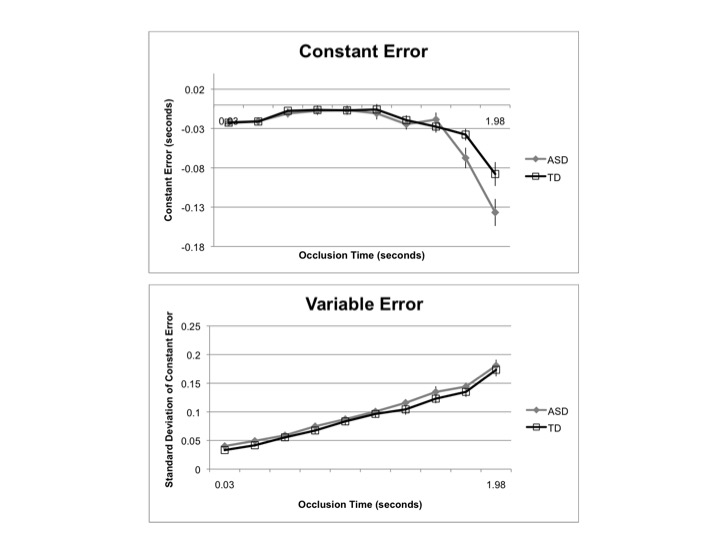