Hall A (Baltimore Convention Center)
J. M. Bebko1, C. A. McMorris1, B. L. Ncube1, O. M. Jon2, J. H. Schroeder1, G. Kontosic3, L. Verbeek3 and M. Spoelstra3, (1)York University, Toronto, ON, Canada, (2)McMaster University, Hamilton, ON, Canada, (3)Autism Ontario, Toronto, ON, Canada
Background: Those raising children with Autism Spectrum Disorders (ASDs) face unique challenges, with the severity of symptomatology varying within a wide range of behavioral, communication and social skill levels. Consequently, research indicates that parents of children with ASDs report higher levels of stress than parents of those with other developmental disabilities or parents of typically developing children (Estes et al., 2009; Weiss et al., 2012). Support programming such as respite service are often cited as major factors that aid to reduce parental stress (Cowen, & Reed, 2002); however, the financial burdens placed on families seeking such services can be overwhelming. Autism Ontario is a service provider and family advocacy centre for individuals and families affected by ASD in Ontario, Canada. In addition to other services, Autism Ontario offers families the opportunity to apply for funding that can subsidize children to attend external programs during March and summer breaks.

Objectives: The goal of the present study was to examine the impact of funding for ASD support programming and its perceived effect on parental stress levels. Additionally, this study will explore how funding was utilized by families, what programs children participated in, what skills were obtained by children with ASD, and most importantly, how these factors relate to parent’s levels of stress.

Methods: An online survey was circulated to parents who had applied for March or Summer Break program funding from 2007-2011. A total of 695 caregivers of children with ASD completed the survey, 477 of whom indicated they had received either March or Summer break funding at least once during the 2007-2011 period. The survey obtained feedback related to basic demographic information, languages spoken by the families, years of Canadian residence, whether parents felt a reduction in stress, and how funding impacted their decision to enroll children in camps or seek respite help. Parents were also asked to describe the type of program in which their child participated (e.g., mainstream day or residential camps, autism-specific camps) as well as the length of time spent in each program. Respondents were asked if their child had made observable improvements in areas such as self-regulation, aggression, stereotypical behavior, improved communication, and social interaction.

Results: Support workers accounted for over 25% of funding expenditure with 50% of families placing their child in programs lasting 5-7days. Importantly, 31% of respondents stated they would not have been able to take advantage of support programs without subsidization. Approximately 78% of caregivers reported a significant decline in stress from their child’s program participation. Finally, results revealed a wide-spread improvement for ASD children in social skills and increased interaction with others.

Conclusions: The current findings highlight that the funding provided by agencies, such as Autism Ontario, offer a critical financial opportunity to those families who would not otherwise be able to afford these support services. Access to supplemental programming, such as residential and day camps, is reported to have significantly benefitted families and their children with ASD, shown by an improvement in skills and significant reduction in parent’s stress. 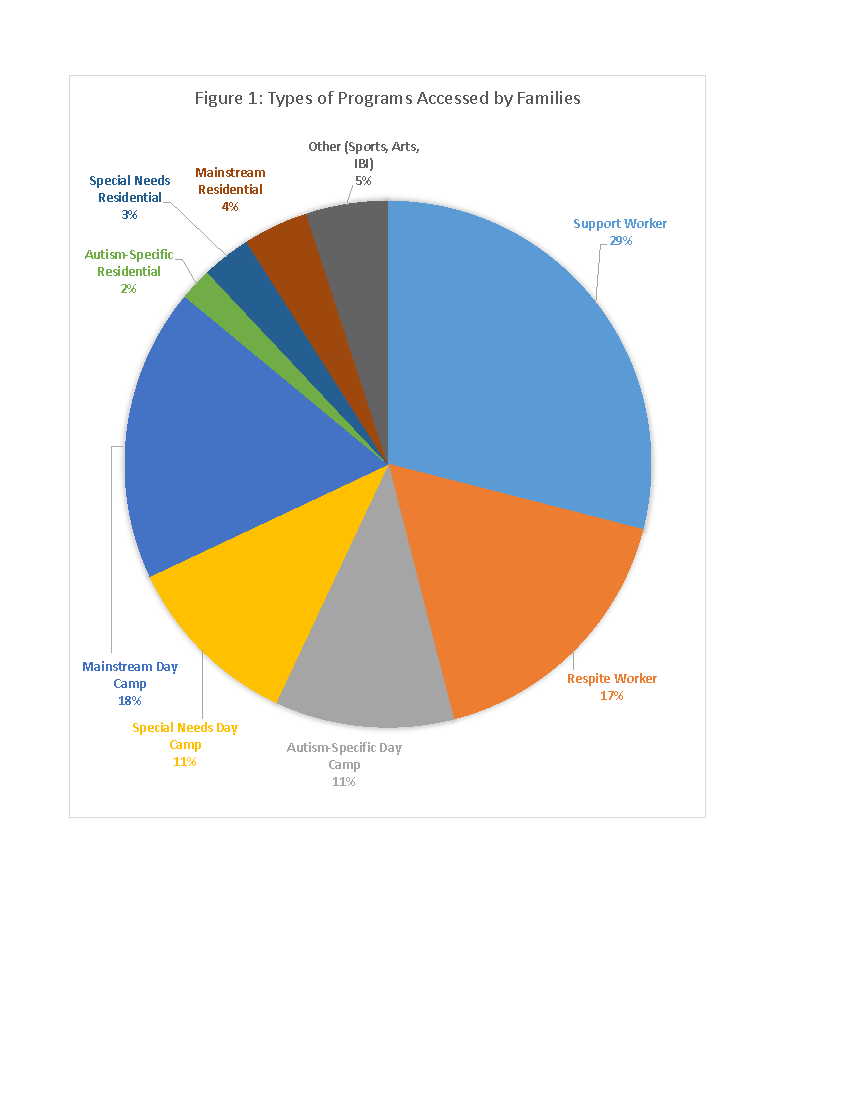