In past studies, few studies examined the adaptive functioning in high-functioning and low-functioning preschool children with autism spectrum disorders (ASDs).

The participants, aged 2-5, were assigned into three groups according to Diagnostic and Statistical Manual of Mental Disorders (DSM-IV-TR) and Mullen Scale of Early Learning. The ABAS-II was used to assess each child’s adaptive functioning, including Conceptual, Socialization, and Practical domains. Children were diagnosed with ASDs according to DSM-IV-TR, whose developmental quotient (DQ), mental age (MA) divided by chronological age (CA), was above .70, belong to HFASDs group (n = 70) in contrast to DQ below .70 were in LFASDs group (n = 54). And, children whose DQ was below .70, but weren’t diagnosed with ASDs were assigned to DD group (n = 39). Children in LFASDs group and DD group were matched on CA, MA, and DQ.

The results of this study provide us more details of adaptive functioning of preschool children with ASDs or DD, including both within-subject and between-subject profiles by using culture-appropriate scales. It’s not surprising that children with ASDs had lower scores on Socialization domain, considering social interaction is the core deficit of ASDs. Besides, we found that caregivers had tended to give the relatively lower scores on ABAS-II if their children had a poor cognitive ability. The results showed on LFASDs and DD groups. However, children with LFASDs got poor adaptive behavior scores on all of the three domains, but DD group got a significant lower score on Conceptual. It reflects that the main deficit of children with DD is cognitive ability, so that caregivers scored lower on Conceptual domain which is more relevant to cognitive ability. These results would be helpful for classifying ASDs in a more precise way. Furthermore, it provides more information to early diagnosis and designing early interventions. 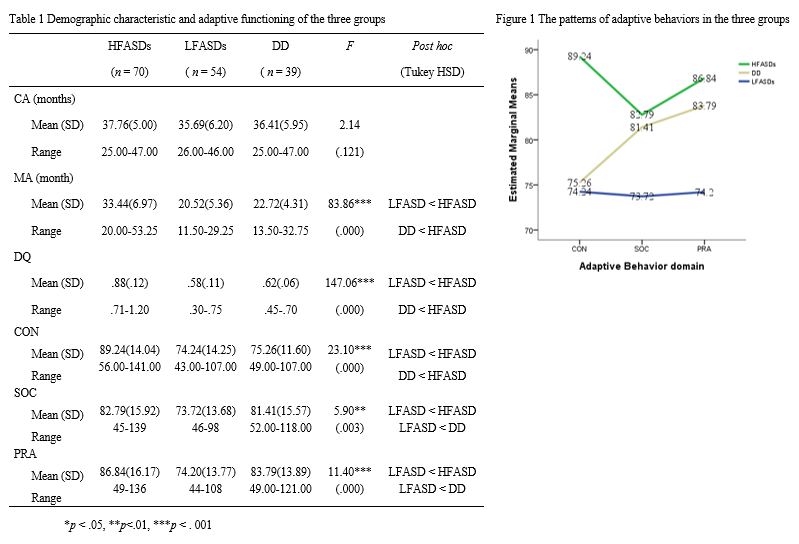