Objectives: To assess whether longitudinal physical growth patterns, measured by attained levels and velocity of body mass index (BMI), weight and height, differ between ASD children and TD children in the Boston Birth Cohort (BBC), where children were enrolled at birth and followed prospectively through childhood at Boston Medical Center in Massachusetts.

Methods: This study included a total of 1,927 children from the BBC. Weight and height were measured by trained medical staff during well-child visits from birth to age 7.  Age-gender specific BMI, weight and height z scores were defined by the World Health Organization (0-2 years old) and the Center for Disease Control and Prevention (2-18 years old) growth charts; and were further categorized as < 5th percentile (underweight), 5th – 85th percentile (normal weight), 85th-95th percentile (overweight) and > 95th percentile (obese).  ASD cases (n=107) were defined based on ICD-9 codes of physician diagnosis in the electronic medical records (over 80% were diagnosed by relevant specialists).  Spline regressions were used to characterize the growth patterns from birth to age 7; and mixed effects models were used to estimate and compare the slopes of the BMI, weight and height z score trajectories of ASD and TD children respectively.  Finally, logistic regressions were used to compare the odds of being OWO between ASD and TD children at birth, age 2 and age 6 respectively.  Important covariates were adjusted in the regression analyses.

Results: The prevalence of OWO increased with age in both ASD and TD children. ASD children started with lower weight at birth, but manifested more rapid weight gain in the first year of life as demonstrated by their higher velocity of BMI (P=0.04) and weight z score (P<0.001) compared to TD children.  The growth curve of ASD children crossed TD around age 1, and then surpassed that of TD children.  Both crude and adjusted logistic regressions indicated that the ASD children had a higher risk of becoming OWO than TD children at age 6 (OR=1.68, 95%CI: 0.93-3.04, P=0.09).  In contrast, the pattern of height growth was comparable between ASD and TD children during the first 6 years of life.

Conclusions: Despite lower weight at birth, children with ASD had faster weight gain during the first year of life, and their growth curve surpassed that of TD children by age 1 and remained higher through age 7.  In addition, the risk of OWO was higher in ASD children comparing to their TD counterparts.  In light of numerous health risks associated with OWO, our study highlights the need for early prevention of OWO among ASD children, in addition to further etiologic research into the overlapping pathways of physical growth and neurodevelopment. 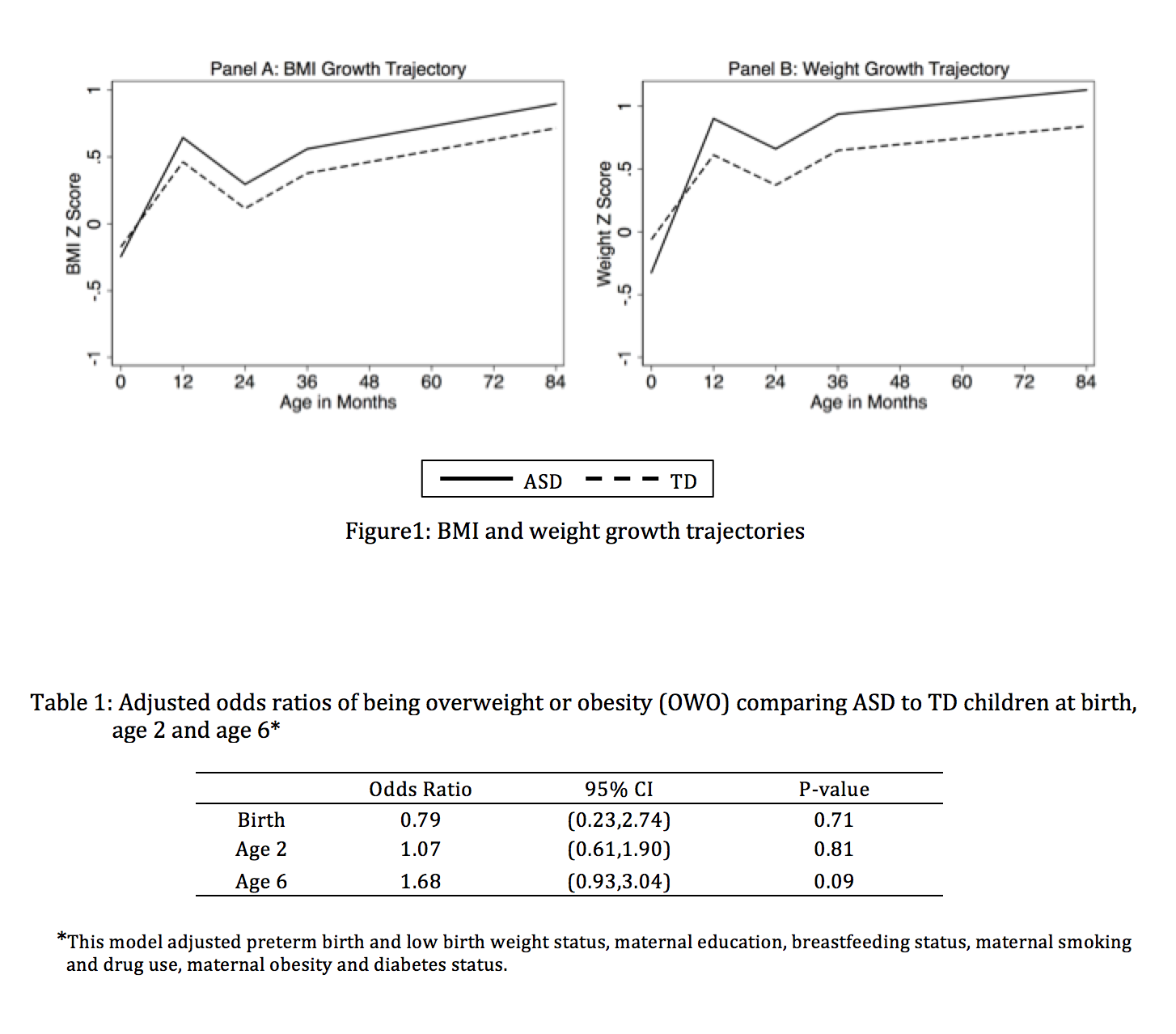