Objectives: The current study examines changes in event-related potentials (ERPs) over time during a visual target detection task in children with ASD and typically developing (TD) children, in order to gain insight into neural adaptability in children with ASD.

Methods:  Participants include children with ASD and TD children, ages 8 to 12 years old and with IQs in the normal range. EEG data was collected while participants performed a visual target detection task for 30 minutes. Data was collected from 128 electrode sites and was analyzed using EEGLab.  EEG waveforms were compared for both non-targets (red circle, 85% of trials) and targets (blue square, 15% of trials) between Early and Late blocks of the experiment. Data collection is ongoing and currently includes 10 ASD and 12 TD participants.

Conclusions:  These preliminary findings suggest reduced adaptation over time in ERP responses to visual non-target stimuli in children with ASD. This may reflect reduced neural adaptability in ASD that may affect the learning process throughout development.  Furthermore, we found blunted ERPs to targets in ASD (despite intact behavioral performance). Future analyses will include the full final participant groups and will relate neural measures to clinical measures of ASD symptom severity and sensory features. Reduced neural adaptability in ASD may affect the learning of a variety of behaviors throughout development and may play a role in the emergence of ASD symptoms. 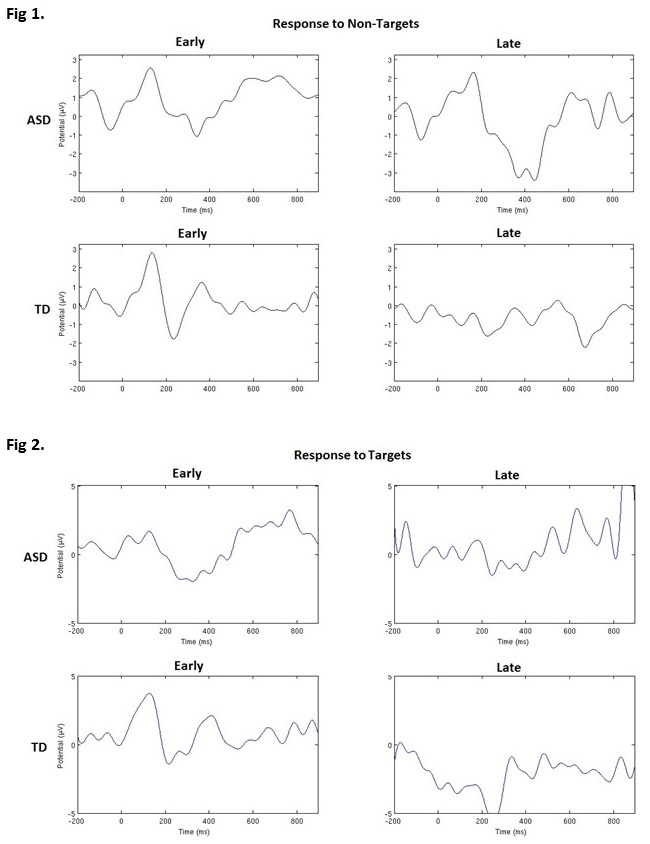