21409
Pivotal Response Treatment: An Examination of Educators' Maintenance and Generalization of Fidelity of Implementation

Hall A (Baltimore Convention Center)
J. K. Randolph1, J. P. Stichter2 and C. Schmidt3, (1)Thompson Center for Autism and Neurodevelopmental Disorders, University of Missouri, Columbia, MO, (2)Department of Special Education, University of Missouri, Columbia, MO, (3)School of Human Services, University of Cincinnati, Cincinnati, OH
Background:   Pivotal Response Treatment (PRT) is an evidenced-based practice of naturalistic behavioral principles. The increase in social communication and engagement behaviors of children with autism as a result of the intervention is well documented.  Most research demonstrates the benefits of PRT as a parent-based intervention, with emergent support for the use of PRT as a school-based intervention.   Little is understood about the maintenance and generalization of PRT fidelity.

Methods:   A concurrent multiple-baseline design across four educator-student dyads was employed in order to examine educators’ maintenance and generalization of PRT across educational contexts and the subsequent impact on students’ social-communication and engagement. Initial training on PRT occurred with each dyad separately over 12, thirty-minute sessions and consisted of modeling, coached practice, and performance feedback during play-based interactions (considered the primary training context).  Then, during the two-month follow-up phase the educators’ rates of fidelity were probed weekly to determine if they were maintaining adequate treatment fidelity and generalizing the use of PRT to untrained secondary and tertiary educational contexts.

Results:  Visual inspection of the data indicates that three of the four educators who were trained to implement PRT were able to maintain the fidelity of implementation in the primary context in which they were trained during the follow-up phase. All four of the educators increased their percentages of implementation of the core behaviors of PRT across contexts during follow-up when compared to their natural rates of these behaviors at baseline. Additionally, one of the four educators was able to consistently generalize PRT with fidelity to an untrained context. Overall, increases in the level of fidelity in which the educators implemented PRT appear to have had an impact on the increased mean rates of the students’ social-communication and engagement behaviors. It should also be noted that students’ social-communication and engagement behavioral increases were observed in the untrained secondary and tertiary contexts.

Conclusions:   These data indicate the potential for some educators to maintain the use of PRT with fidelity without additional consultative support after training has ended, but the results also indicate a need to consider other potential variables to increase the likelihood of treatment maintenance by all educators.  Discussion includes the need to better understand the long-term impact on students who are supported by educators using PRT across contexts with fidelity versus the initial positive benefit that is achieved when educators initially reach fidelity.  The need for more research on educator characteristics that may predict the need for follow-up consultation to maintain and generalize treatment fidelity is also discussed. 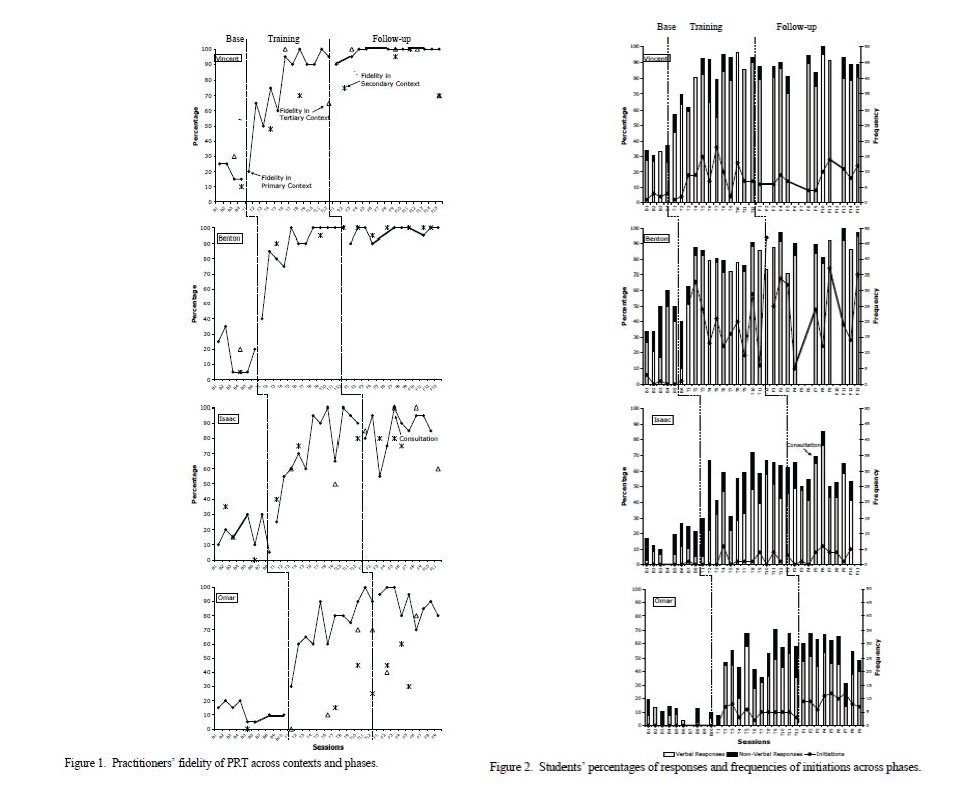