Hall A (Baltimore Convention Center)
D. Davidson1 and E. Hilvert2, (1)Loyola University Chicago, Chicago, IL, (2)Loyola University, Chicago, IL
Background:  The ability to understand and reflect upon one’s own emotions and the emotions of others is central to emotional competence. Self-conscious emotions, in particular, are thought to facilitate our social interactions and relationships by motivating us to adhere to social norms (guilt) as well as personal standards (pride).

Objectives:  Despite the importance of self-conscious emotions, almost all studies have explored basic emotion processing in children with ASD (see Uljarevic & Hamiliton, 2013).  Moreover, recognition of emotions is often assessed through facial recognition tasks, with emotions presented at full intensity.  The purpose of this research was to assess the recognition of basic and self-conscious emotions from situational contexts that varied in intensity.  Relations between emotion recognition, ASD symptomatology, and Theory of Mind (ToM) were also explored.

Methods:   Twenty-three children with ASD and 25 neurotypical (NT) children were tested. No significant differences between groups were found for age, male:female ratio, or non-verbal reasoning (Table 1). Children were given a situational emotional test that provided 12 emotional situations for basic (happy, fear, sad) and self-conscious (pride, embarrassment, guilt) emotions. An intense and a less intense version of each emotion were presented. Children were asked to label the emotions (free, cued) and rate the intensity and duration of the emotions (1-5 scale). 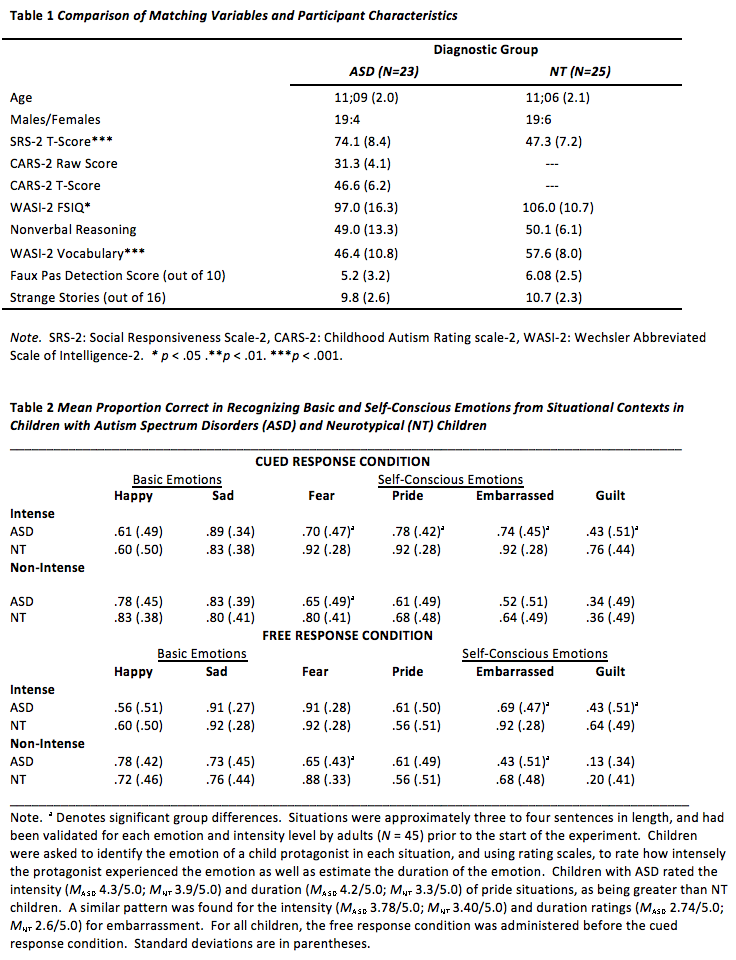