Autism Spectrum Disorder (ASD) is a developmental disorder characterized by deficits in communication, social, and motor skills (CDC, 2013). Research has demonstrated that individuals with Autism Spectrum Disorder (ASD) have working memory deficits that affect both short-term storage of information and application of that information (Baddeley, 1992).

This study aimed to examine if the working memory deficit that has been identified among a clinically diagnosed ASD population is also present in a neurotypical, non-diagnosed population that displays either a small number or large number of autistic behaviors. The study also examined whether adding an emotional component to a working memory task affects participants’ performance.

A non-clinically diagnosed sample consisting of college student participants with a high number (n = 42) or a low number (n = 43) of autistic behaviors, as measured by the Autism Quotient (AQ; Baron-Cohen et al., 2001), was used. Working memory was tested using different forms of the standard n-back task. The standard n-back task presents a series of letters and requires the participant to indicate if the letter shown matches a letter previously presented (Koshino et al., 2005). In the current study, there were three conditions in which participants press a key if the letter matches the one presented first (0-back) in the series, was the one before it (1-back), or was two before it (2-back). In addition to administering this task, we created a modified n-back task that presented a series of faces expressing emotions as stimuli instead of letters, allowing us to examine the interaction between emotion processing and working memory.

Results:  There were no main effects or interactions on the letter n-back tasks. On the emotion n-back task, the reaction times (RTs) of participants with fewer autistic behaviors specific to the attention to detail subscale did not significantly vary based on which emotion was being displayed, while the RTs for participants higher on this subscale varied based on emotion; F(3, 25) = 3.17, p = .04. As can be seen in Figure 1, participants high on the AQ attention to detail subscale were significantly slower when a fearful face was shown compared to either a happy, t(29) = 2.96, p = .01, or angry face, t(30) = 2.37, p = .03. 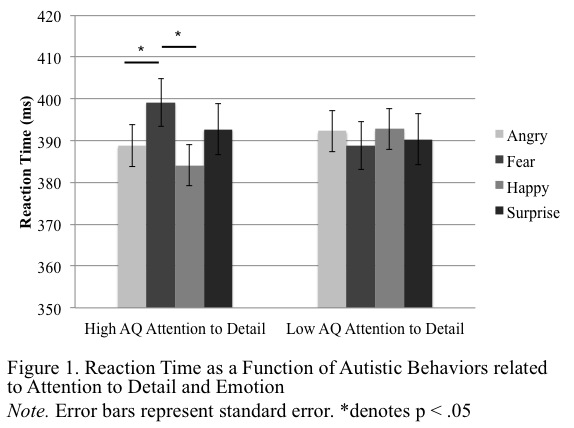