Methods: Our sample contains recordings from 14-months-old infants at-risk for autism who were later diagnosed with ASD (ASD; N=11) or not (noASD; n=24), as well as controls (Control; N=40). Infant EEG was recorded in response to gaze shift directed toward or away from the infants [Elsabbagh et al., (2012), Cur Biol, 22, 338-342]. After basic preprocessing (reformatting to average reference, notch filtering, within-condition time-locked averaging), sources were estimated from high-density EEG recordings using a newly developed MRI template. The first principal component was then computed from dipoles included within every region of the Tzourio-Mazoyer atlas. Finally, between-regions connectivity was computed using phase-locking values.

Results: Following a preliminary exploratory investigation, we concentrated our analysis on delta activity (1-4 Hz) during direct gazes because this condition yielded the strongest between-group differences. Three regions showed significant effects (Bonferroni corrected at p<0.05 corresponding to uncorrected p<0.00056) for ASD vs. Control comparison and four regions for the noASD vs. Control comparisons. All significant effects were showing overconnectivity for the noASD group and underconnectivity for the ASD group. The table accompanying this abstract gives the mean (± standard deviation) of the phase-locking value as well as p-values and t-values for the 7 most significant regions, for both group comparisons. Further, the three regions (see the accompanying figure for violin plots showing the distribution of the connectivity for these regions) giving the most significant differences for noASD group (right thalamus; left middle temporal gyrus; right inferior frontal gyrus, triangular part; all overconnected) were all showing clear underconnectivity in the homologous regions (i.e., same regions, opposite hemisphere) for the ASD group. These homologous regions were among the first seven most significantly affected regions for the ASD group, all with p < 0.0065 (uncorrected). Had these two sets of 3 and 7 regions been picked randomly, the odds of observing at least three such correspondences would only have been of only 0.03%.

Conclusions: Spatially-resolved connectivity obtained through source reconstruction distinguishes both noASD and ASD from controls, with strikingly opposed patterns of abnormal lateralisation. Our results also showed clear underconnectivity in the ASD group and clear overconnectivity in the noASD group, showing a possible compensatory mechanism in infants at-risk who do not develop ASD. These effects were clearly seen in the delta band, when showing pictures of direct gazes. 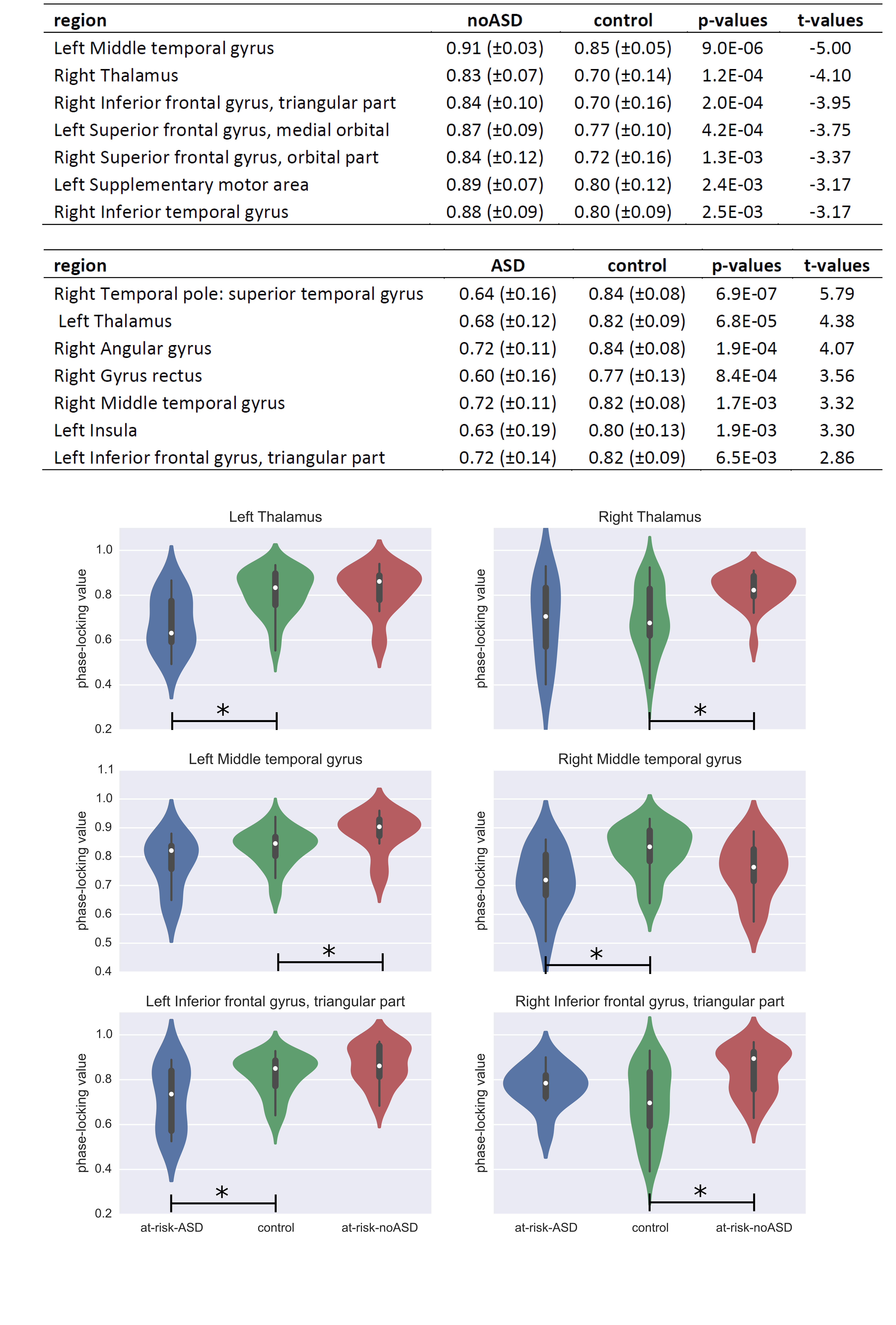