Objectives:   We sought to examine the relationship between blood levels of PBDE and the differential sensitivity of the immune cells following ex vivoPBDE exposure using banked plasma and activated peripheral blood mononuclear cell (PBMC) supernatants from children with ASD, and age- and geographically- matched typically developing control (TD) children enrolled through the CHARGE (CHildhood Autism Risks from Genetics and the Environment) study.

Results: We found that despite no difference in overall body burden between the two subject populations, increased body burden of PBDE correlates with a suppressed immune response, especially in children with ASD.  There was a differential effect of total PBDE body burden on baseline (no activation) immune function between ASD and TD children whereby T cell function was more negatively affected in ASD than in TD, as measured by lower levels of IL-2, IL-13 and IFN-gamma.  Higher plasma levels of PBDE were also negatively correlated with production of the adaptive T-cell cytokines IL-2 and IL-13 after activation of PBMCs.  Further, higher plasma levels of PBDE negatively correlated with the production of inflammatory (IL-17) and regulatory (IL-10) T-cell cytokines after PBMC activation. Finally, baseline production levels of T cell cytokines IL-2 and IFN-gamma are significantly negatively impacted by several individual BDE congeners in children with ASD compared to TD controls at baseline; this was highly significant for the congener BDE-49 (p=0.001). Further, when PBMC from children with ASD and TD controls were exposed ex vivo 50nM BDE-49 without stimulation (media control), we noted a significant increase in the production of the inflammatory cytokines IL-6, TNF-alpha, IL-1, and the chemokines MIP-1a and MCIP-1 in ASD cases compared to the TD controls (p<0.05).  Finally, an increase in IL-6 (p=0.01) and GM-CSF (p=0.03) was noted following pre-treatment with 250nm of BDE49, and this was significantly positively correlated with higher body burden of BDE-49, but not BDE-47 or BDE-95.

Conclusions: We have found that despite a nearly identical body burdens of the flame-retardant PBDE in ASD and TD children, there is a differential impact of PBDE exposure on immune system function in children with ASD compared to little or no impact on the TD control children.  This suggests an underlying susceptibility to environmental toxicant exposure in children with ASD that could relate to immune anomalies reported in these children. 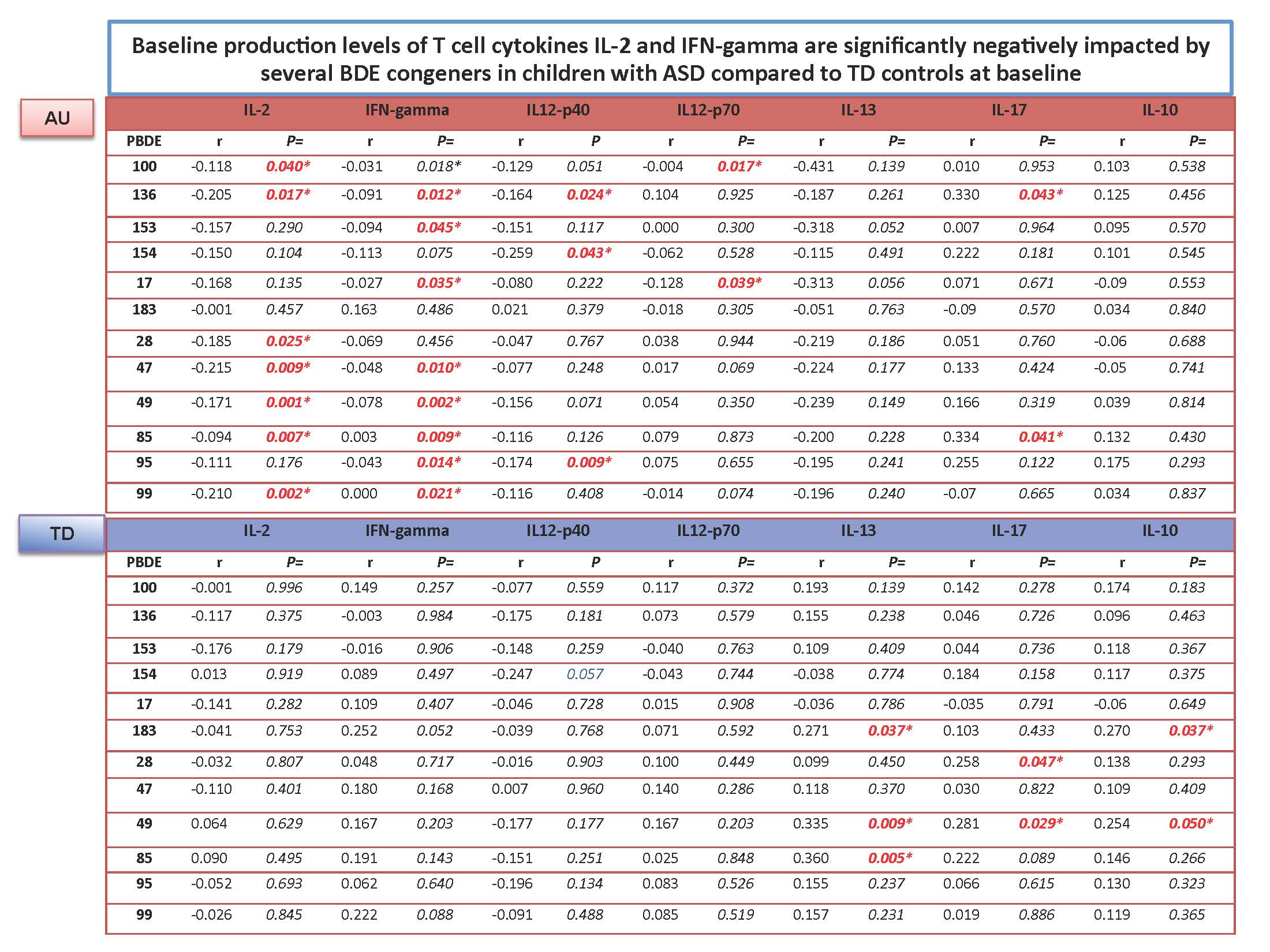