21578
Auditory Responding to Joint Attention Skills and Language in Toddlers with Autism, Other Developmental Difficulties, and Typical Development

Objectives:  Our aim is to document how toddlers with ASD, other developmental difficulties (DD), and typical development (TD) respond to auditory and multimodal joint attention bids and to determine if preverbal children can respond to these bids.

Methods:  53 toddlers (mean age=22.5 months) participated:  18 with ASD, 24 with DD, and 11 TD.  Joint attention skills were assessed using the Joint Attention Scales-Auditory (JAS-A) that includes 3 RJA-M trials adapted from the Early Social Communication Scales (Mundy et al., 2003) and 3 new RJA-A trials.  In each trial, the examiner bids for joint attention twice to one of 6 target (pictures or toys with names that most 12-month olds understand according to the MacArthur Communication Development Inventory [MCDI; Fenson et al., 1993] norms).  In RJA-M trials, the examiner says the child’s name and then shifts gaze and points at the target; In RJA-A trials, she says his name and labels the target (e.g., “There’s a ball!”).  A pass indicated that the child responded by seeking the target.  Children were categorized as preverbal if their parent reported 10 or fewer words on the MCDI.

Results:  The percentage of children passing at least 2 of the 3 trials for RJA-M was 100%, 75%, and 22% and for RJA-A trials was 45%, 21%, and 17% in the TD, DD, and ASD groups, respectively (see Figures).  Thus children in the TD and DD groups did significantly better on multimodal than auditory trials, with little difference for children with ASD.  No TD children were preverbal.  For children with DD, the odds of failing all multimodal trials was 8.50 times greater when children were preverbal and 12.0 times greater for auditory trials.  For children with ASD, there was essentially no effect; corresponding odds ratios were 1.11 and 0.60, respectively.

Conclusions:  Our results replicate previous studies that document an RJA deficit to multimodal bids in ASD.  They also demonstrate that paring down bids so that they are solely auditory heightens their difficulty, even for TD two-year-olds who readily follow multimodal bids.  Children with DD who are preverbal were less likely to follow multimodal and, even more so, auditory bids, suggesting that language delays may be affecting RJA.  But the link between RJA and emerging language was less clear in ASD: regardless of language status, toddlers in the ASD group performed relatively poorly, suggesting that a core JA difficulty, not a language difficulty, might be paramount.  Implications for intervention are discussed. 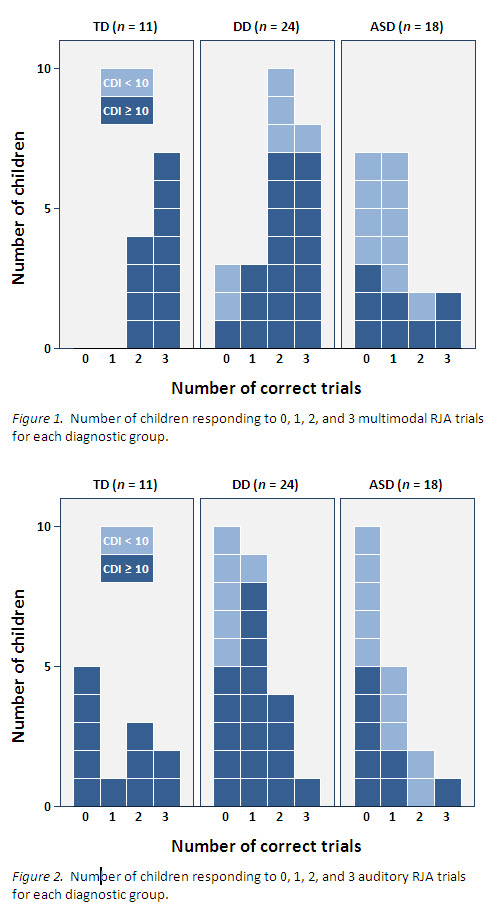