Methods: Data for 667 children with ASD between 3 and 14 years were drawn cross-sectionally from an extant longitudinal survey conducted with a national sample. Parent stress was measured using the Parenting Stress Index-Short Form (PSI). Measures of adaptive social communication skills included: the Communication Domain Standard Score and the Socialization Domain Standard Score from the Vineland Adaptive Behavior Scales-Second Edition(VABS-2; Sparrow et al., 2005) and a parent report of their child’s verbal expressive language level. The child’s IQ as reported by parents, and the child’s chronological age in months were control variables in the model. A multiple regression analysis was conducted to predict PSI Total Score from VABS Socialization Standard Score, VABS Communication Standard Score, and Parent Expressive Language Estimate after controlling for age and IQ.

Results: After controlling for the variance accounted for by chronological age and IQ (1.584%), the adaptive social and communication variables accounted for 7.76% of the variance in parent stress on the PSI Total Score (p<.001). Linear regression models were run for each PSI subscale, which confirmed our hypothesis that deficits in social and communication abilities accounted for more variance in the Parent-Child Dysfunction (R² = .070) subscale than the Difficult Child Subscale (R² = .054) or the Parent Distress Subscale (R² = .036) after controlling for age and IQ.

Conclusions: Our findings indicate that adaptive social communication skills in children with ASD are contributing to parent stress. Clinical implications of these findings include further consideration of the needs of the entire family when developing treatment goals for children with ASD. 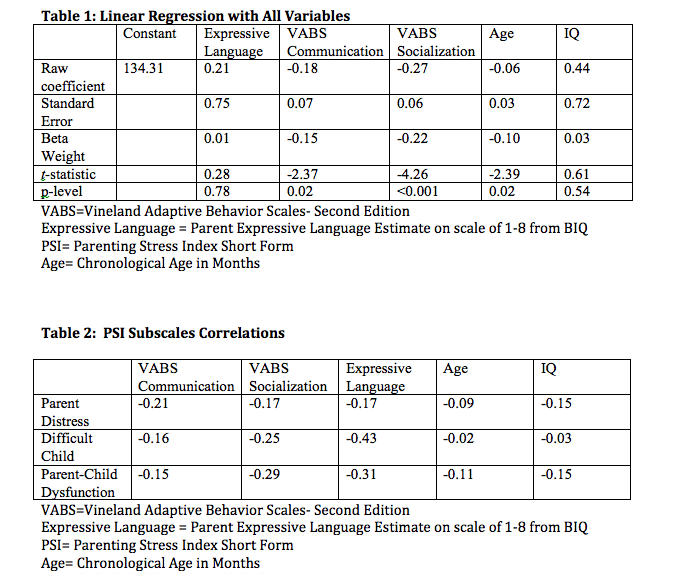