21685
Real-World Executive Functions in Adults with Autism Spectrum Disorder: Profiles of Impairment and Associations with Adaptive Functioning and Co-Morbid Anxiety and Depression

Although executive functioning (EF) difficulties are well documented among children and adolescents with autism spectrum disorder (ASD), little is known about real-world measures of EF among adults with ASD.  In spite of recent estimates indicating that nearly 70% of individuals with ASD do not have an intellectual disability, adult outcome in ASD remains poor.  Two key components of outcome are psychiatric co-morbidities and adaptive behavior, both of which are related to EF in children and adolescents with ASD.

To examine real-world EF profiles as reported on the informant version of the Behavior Rating Inventory of Executive Function-Adult; and to investigate the links between real-world EF problems and both adaptive functioning and internalizing psychopathology (i.e., anxiety and depression symptoms).

One-sample t-tests indicated that adults with ASD were impaired on all nine domains measured by the BRIEF-A relative to the normative mean (p’s<.05). A repeated measures ANOVA demonstrated a variable EF profile in ASD (F=10.20, p<.001) with the most prominent deficits occurring in flexibility (i.e. the BRIEF-A Shift scale) and metacognition (i.e. the BRIEF-A Metacognition Index and the Plan/Organize scale).  Hierarchical multiple regressions revealed that even after accounting for the influences of age, IQ, and ADHD symptoms, flexibility problems were associated with anxiety-related symptoms (F=8.56, p=.002; ΔR2 =.38), while metacognition, and specifically problems on the Plan/Organize scale were associated with depression symptoms (F=4.62, p=.02, ΔR2 =.17).  Although neither age nor IQ scores were significant predictors of adaptive behavior, metacognition scores were.  Adding ADHD problems to the regression model as a nuisance variable resulted in metacognition problems no longer significantly predicting adaptive functioning impairments however.

Real-world EF problems persist into adulthood, with a profile of impairment that emphasizes problems with flexibility and metacognition, consistent with previous reports in children and adolescents. The relationship between EF problems and adaptive behavior may be mediated by ADHD symptomatology in this adult sample. Even after accounting for ADHD symptoms, EF problems are strongly associated with co-morbid anxiety and depression symptoms, making EF an important treatment target among adults with ASD. 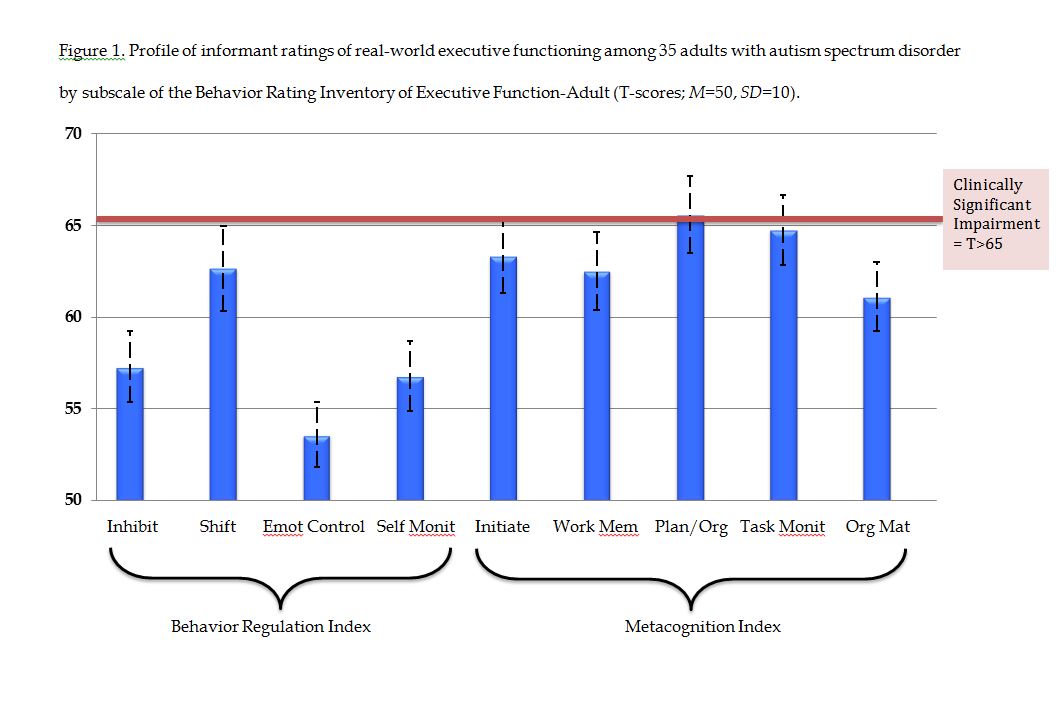