Objectives:  The goal of this study was to add to existing literature by assessing the role of alexithymia, compared to symptoms of autism and anxiety, in both reduced eye fixation and emotional labeling accuracy, in ASD, anxious, and neurotypical control groups.

Methods:  Participants were 25 adults diagnosed with ASD as well as 27 anxious controls (ANX) recruited from a university counseling center, and 25 neurotypical university students (TYP). All participants completed a battery of questionnaires including the Toronto Alexithymia Scale (TAS-20), the Autism Spectrum Quotient (AQ), and the Penn State Worry Questionnaire (PSWQ). Participants viewed filmed emotional expressions selected from the Amsterdam Dynamic Facial Expression Set (ADFES) and indicated whether they portrayed joy, fear, or anger while we tracked their eye movements.

Results:  Overall emotion identification accuracy was high (~98%) and did not differ significantly between groups. Repeated-measures ANOVA indicated a significant main effect for group [F(2, 61) = 5.05, p < .001, η2 = .13] in the number of fixations on the eyes during while watching the emotional expressions (ASD < ANX < TYP). Average eye fixation across all emotions was significantly correlated with alexithymia levels (TAS-20, r = .26) and autism symptoms (AQ, r = .18), but not with trait worry (PSWQ, r= .01). Hierarchical regression indicated that only TAS-20 was a significant predictor of eye fixation (β = -.28).

Conclusions:  Our results replicate and extend previous findings of the role of alexithymia in reduced eye fixation in ASD. A similar pattern in an anxious control group provides added evidence of the transdiagnostic importance of alexithymia in processing emotional faces. While additional research is needed to better understand the directionality of these effects, these preliminary findings suggest that treating alexithymia may be a promising therapeutic intervention for social difficulties in clinical populations. 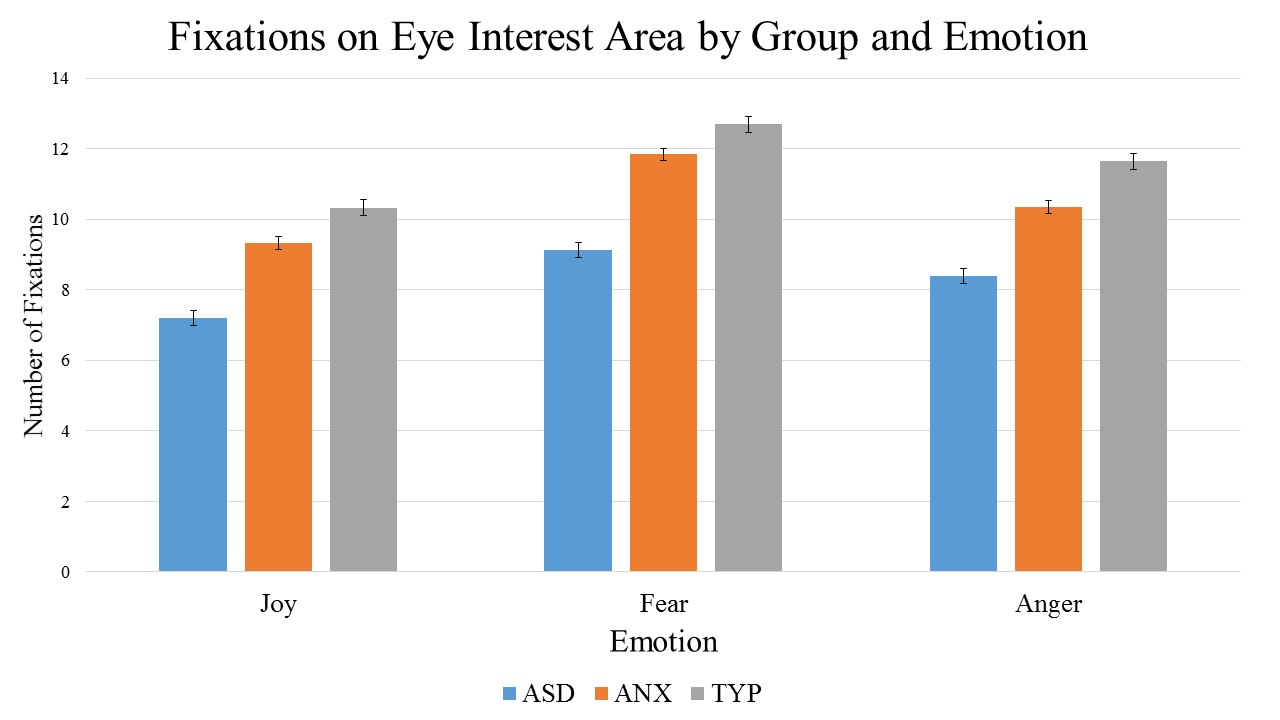