Objectives:   This was an initial pilot investigation of the efficacy of a classroom-based music-based intervention, Voices Together®, for improving communication skills in children with autism and developmental disabilities.

Conclusions:   Findings from this initial pilot investigation suggest that music therapy delivered in a classroom can result in improvements in verbal abilities among individuals with autism and other developmental disabilities. The finding that improvements were achieved during 45-minute weekly sessions in a classroom-based, public school setting suggests that structured music therapy programs such as Voices Together® may be a time efficient and cost effective modality of treatment. These preliminary findings warrant conducting a randomized controlled trial to further investigate the efficacy of classroom-based music therapy for improving speech development in children with autism and other disabilities. 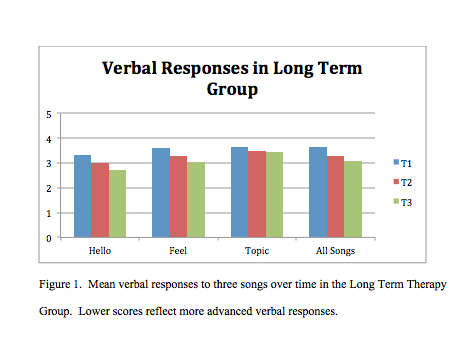