21830
Support Needed for Japanese Adolescent Girls with ASD: The Gap Between Girls with and without ASD

Only a few studies have been conducted on females with Autism Spectrum Disorder (ASD). Females often have different difficulties than males. If we focus on the sex differences, we should direct our attention to adolescence. It’s a period in which not only physical changes but mental ones appear in the development of secondary sex characteristics. Accordingly, their social relationships change and the child-parent relationship often becomes strained. When we consider those with autistic characteristics, adolescents with ASD have higher risks of maladjustment than others. Especially in Japan, more for girls than boys, changes in social behavior tend to be expected after puberty. Since the status of women is still lower in Japanese culture, “femininity” is required of them.

The purpose of our study is to clarify support needed for adolescent girls with ASD from the both sides of autistic traits and sex differences.

Materials: We created a questionnaire about attachment to parents (e.g. ”Even if I don't tell anything, parents understand my feeling.”). There’re also sections about distressing experiences of 7 items. Then participants ranked their advisers.

These results suggest the ASD group was further behind when it comes to psychological separation from their parents than the TD group. Because it is difficult for the ASD group to promote friendship, their relationship seems to be hard to shift. Consequently, they ask teachers for advice next to parents. Especially TD girls rely on their friends, which was markedly different from girls with ASD. This gap poses a large problem because learning various things from friendship is very important part of growing up socially. A further direction of this study will be to create the support program for adolescent girls with ASD considering not only autistic traits but also sex differences. 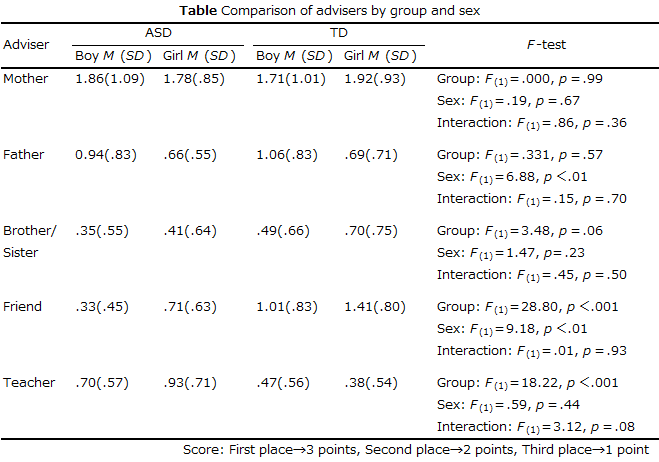