Hall A (Baltimore Convention Center)
J. Mendelson1, J. A. Gates2 and M. D. Lerner3, (1)Marcus Autism Center, Children's Healthcare of Atlanta and Emory University School of Medicine, Greensboro, NC, (2)Stony Brook University, Smithtown, NY, (3)Stony Brook University, Stony Brook, NY
Background:   As a result of the core social deficits of autism spectrum disorder (ASD), some have questioned whether meaningful social relationships, including friendship, are even possible in this population (e.g., Hobson, 1993; Calder, Hill, & Pellicano, 2013; Mitchell & Locke, 2014). Friendship serves a range of crucial functions across the lifespan (Baumeister & Leary, 1995), with friendlessness yielding serious, negative implications for children  (Bagwell, 2004; Berndt & Keefe, 1995). [JG1] Crucially, recent studies indicate that at least some youth with ASD do make friends according to their parents, peers, and themselves (e.g., Kasari et al., 2011; Bauminger et al., 2008), and that these friendships may vary as a function of age and cognitive ability (Mendelson & Lerner, 2014). However, to date no systematic meta-analysis of friendship presence and patterns in youth with ASD has been conducted.

Objectives:   We aimed to meta-analyze the empirical literature on friendships of children with ASD.

Methods:   We conducted a systematic review of the literature (via PsycINFO and PubMed) on friendships (sociometric, self-report, parent-report) among school-age youth with ASD. 659 candidate articles were identified, and a pair of blinded coders examined them according to these inclusion criteria: a) empirical studies presenting quantitative data not previously published; b) published in peer-reviewed journals; c) claimed to include individuals with ASD; d) included some confirmation of ASD diagnostic status; e) included at least one participant in the 8-12 age range; f) not intervention studies; g) presented quantitative data on friendship. This yielded 18 articles. All 18 articles were double-coded by two blinded raters on demographic variables and all component scales. Coders achieved excellent agreement (ICC(1,2) > .97). Three articles were excluded due to overlapping participant samples and 14 were included in the final analysis. Meta-analyses were run for sociometric, self-report, and parent-report measures of friendship. If significant variation was found across the studies, fixed effects moderator analyses were conducted for age and IQ.

Results:   Results from 1,768 participants with ASD were analyzed M%male =85.46, Mage=114.92; MIQ=91.85). We found that youth with ASD do make friends according to peers and parents (Figure 1; Hedges’s g > 2.84). However, self-reported friendship quality (Hedges’s g  = -1.09) and parent- and peer-reported quantity (Hedges’s g < -0.63) were poorer than TD peers (Figure 2). For sociometric and self-report quality of friendship measures, the differences between ASD and TD peers were smaller with both age and higher IQ Older youth with ASD made more friends than younger youth according to sociometrics. Parents reported youth with higher IQ to have fewer/less active friendships.

Conclusions:   Despite the widespread assumption that youth with ASD do not make friends, this meta-analysis reveals that they do so, and that they are of reasonable quality. Indeed, the difference from zero friendships was larger than the differences between youth with ASD and TD. Nonetheless, these friendships were lower in number and quality than those of their TD peers. These friendship patterns appear dynamic across time and IQ. This meta-analysis provides a foundation for future friendship studies in ASD. 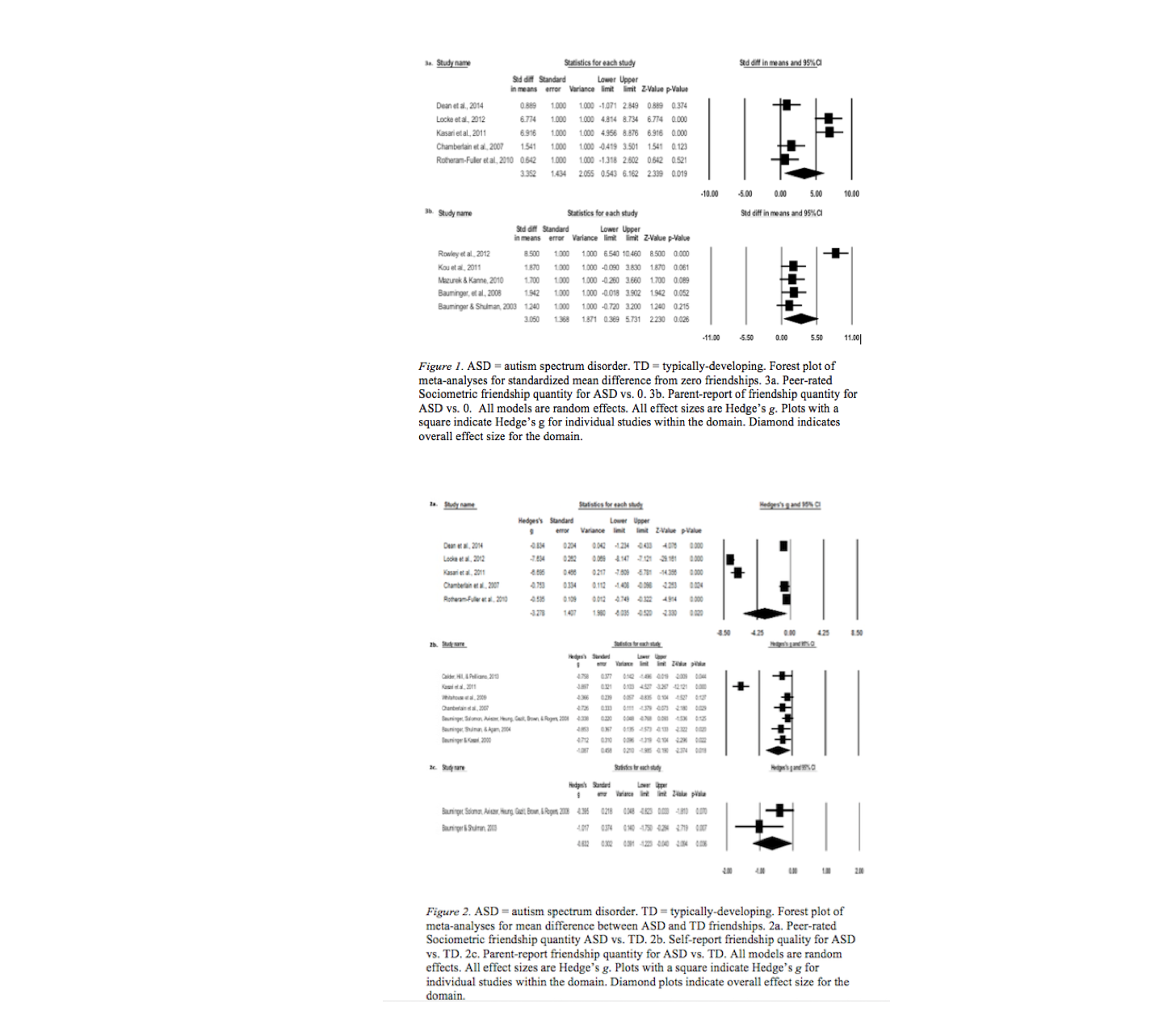