Numerous studies have investigated the patterns of asymmetry in individuals with autism spectrum disorder (ASD).  Atypical lateralization of language has been found in individuals at risk for ASD as young as 12-months-old.  Seery et al. (2013) found distinct patterns of lateralization in the late slow wave (LSW) in response to speech, and in follow-up studies, 12-month-olds later diagnosed with ASD showed reversed lateralization.  Atypical behavioral asymmetry has been observed as left and mixed handedness occur more frequently in children with ASD (Dane & Balci, 2007).  To date, no study has investigated the relationship between early patterns of cerebral lateralization and behavioral asymmetry in infants later diagnosed with ASD.

The current study aims to explore the relationship between neural responses to language stimuli at 12 months and handedness at 36 months.

Utilizing a novel observational approach, hand preference was measured on a variety of behavioral observations during the Autism Diagnostic Observation Schedule and the Mullen Scales of Early Learning at 36 months.  Factor analysis with principle axis factoring extraction technique indicated a one-factor model with medium to high factor loadings (Table 1).  Using these measures, a composite handedness score ([RH-LH]/[RH+LH]*100) was calculated for each individual.

Across all participants, there was no significant relationship between LSW asymmetry at 12 months and handedness at 36 months (rs=-0.09, p=0.43). Within each of the groups, 12 month LSW asymmetry did not significantly predict 36 month handedness in LRC infants (rs=-0.22, p=0.17) or HRA- infants (rs=-0.05, p=0.78).  Conversely, for HRA+ infants, there was a significant relationship (rs=0.78, p<0.05) such that infants with a laterality index more similar to the LRC group at 12 months were stronger right handers at 36 months. 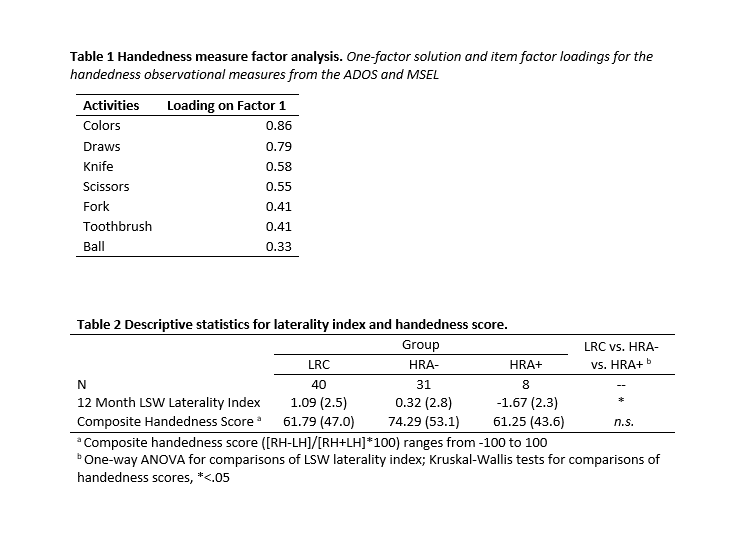