Objectives: This research concerns the question: Which intervention is the most effective in improving the social skills and self-efficacy?

Methods: A convenience sample of 24 participants, ages 13-19, with ASD were divided into equal groups (age and gender) to participate in a 4-week repeated measures design that compared two conditions (goal-directed individualized with non-goal directed recreation). Three outcomes were measured before and after the weekly 2 hour sessions in both conditions: parent-report of Home Community-based Social Scale (HCSBS), Self-efficacy Scale (Dishmann et al., 2005), and researcher observation (OARS smart tablet application) of six social skills. The same recreational activities (such as social games and horseback riding) were used in both conditions. Only participants in condition A received an individualized assessment and       treatment plan.

A series of paired sample t-tests were used on each dependent variable to determine if there were significant differences within each group before and after the programs. Next, a factorial ANOVA with repeated measures was used to compare the differences between the conditions (goal-directed vs. non-goal directed recreation participation).

Results: The t-test revealed a difference pre to post (p <. 05) in the goal-directed condition on the parent-reported HCSBS, the self-efficacy scale, and OARS in eight different areas: a decrease in impulsive behavior, an improvement in admiration by peers, compromise with peers, adjusting to expectations, overall social competence score, knowledge of recreational options, and responsiveness to mentor. A descriptive analysis revealed that social games were more effective in promoting responsiveness to mentor/peer and the outdoor equine-assisted activities were more effective in supporting initiating conversation. Based on the repeated measures ANOVA, the areas of significant difference (p<. 05) between the individualized-goal and non-goal directed were found in the self-report of self-efficacy: 1) perceiving physical activity as fun and enjoyable, 2) knowledge of activity, and 3) increased positive mood regarding activity.

Conclusions: Individualized goal-directed recreational therapy appears to be more effective in targeting self-efficacy for community participation than general recreation programs. Participants in both groups received an opportunity to participate in the same recreational interventions over the same time period with the same frequency. Therefore, the main difference in the groups was that the recreational therapy (RT) condition had a goal-directed intervention based upon the assessment and goal planning. The individuals in the RT condition had input into their goals and intentionally worked toward improving their own social and physical skills while participants in the other condition only received the recreational program itself. Just providing a recreational program is not enough. For more effective community integration, intentional targeting and inclusion of the adolescent with ASD in goal planning may have a greater impact on self-efficacy for social recreational and leisure participation. 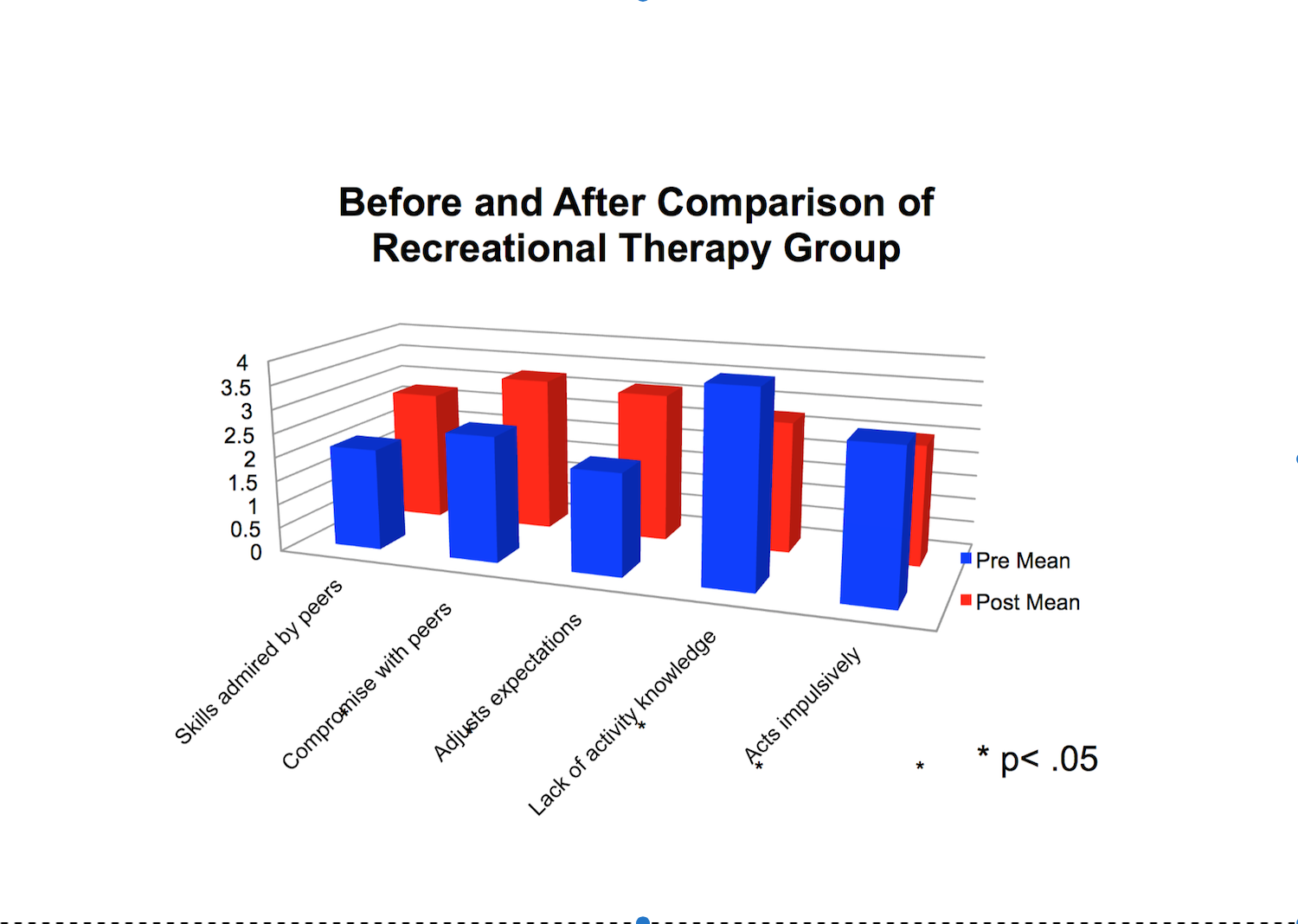