Hall A (Baltimore Convention Center)
S. R. Edmunds1, A. Rozga2, Y. Li2, L. V. Ibanez1, E. A. Karp1, J. M. Rehg2 and W. L. Stone1, (1)Department of Psychology, University of Washington, Seattle, WA, (2)Georgia Institute of Technology, Atlanta, GA
Background: Monitor-based eye tracking studies indicate that young children with ASD show atypical patterns of attention to internal features of the face, particularly the eyes. These findings have not been replicated in the context of more ecologically valid live social interactions, owing largely to a reliance on coding gaze behavior from videos recorded by stationary room camcorders and use of “gaze to face” as a proxy for “gaze to eyes.” Children’s eye contact during social interactions was measured that by instrumenting their social partner with a pair of glasses that contain an outward facing (point of view, PoV) camera (Pivothead Kudu Black) in the nose bridge (Figure 1). Coding gaze based on the PoV video produces more reliable estimates of toddlers’ looks to the partner’s eyes (vs. the face in general) than coding based on videos from stationary camcorders (Edmunds et al., 2014).

Objectives: To compare patterns of gaze to and away from a social partner’s eyes and face during a live play interaction in toddlers with ASD and typically developing (TD) toddlers. We hypothesized that toddlers with ASD would look less frequently to the adult’s eyes and face and look away longer compared to TD children, and that more instances of gaze to eyes would be detectible using the PoV camera than the camcorders, as the PoV camera will more likely capture the toddlers’ entire face and support more accurate gaze coding.

Methods: Seven toddlers with ASD (M=33.5 mos; SD=3.5 mos) and eight TD toddlers (M=34.6 mos; SD=6.0 mos) participated in a 5-minute structured interaction routine with an examiner wearing a PoV camera. Interactions were also recorded simultaneously by three tripod-mounted camcorders that captured different angles. Onsets and offsets of three categories of eye gaze—to eyes, face (not eyes), and away—were coded for the PoV and camcorder videos by separate pairs of coders who were blind to the toddlers’ diagnostic status. Overall Kappas for frame-level agreement were k=.67 for the PoV camera and k=.49 for the camcorders (Figure 2a).

Results: Multivariate ANOVAS examined the effect of diagnosis on looks to eyes, face, and away as correlated dependent variables. As measured by the PoV camera, toddlers’ rate of looks varied by diagnosis, F(4,10)=4.55, p=.02. ASD toddlers looked at the examiner’s eyes and face less frequently than did TD toddlers, F(1,14)=6.11, p=.03 and F(1,14)=16.44, p<.00 respectively. Toddlers’ average duration of looks away varied by diagnosis, F(4,10)=4.70, p=.02. ASD toddlers had longer average looks away from the examiner, F(1,14)=22.21, p<.001. In contrast, as measured by the camcorders, ASD and TD toddlers did not differ in their overall rate of looks or average duration of looks to the examiner’s eyes (Figure 2b), face, or away.

Conclusions: The PoV camera, but not the camcorders, found differences in TD and ASD toddlers’ eye-to-eye gaze during social interactions. This approach is unobtrusive, easily deployed in multiple settings, and cost-effective compared to monitor-based eye tracking. Future directions include replication with larger samples, examining use in natural settings, and developing automated coding of toddlers’ gaze from PoV videos. 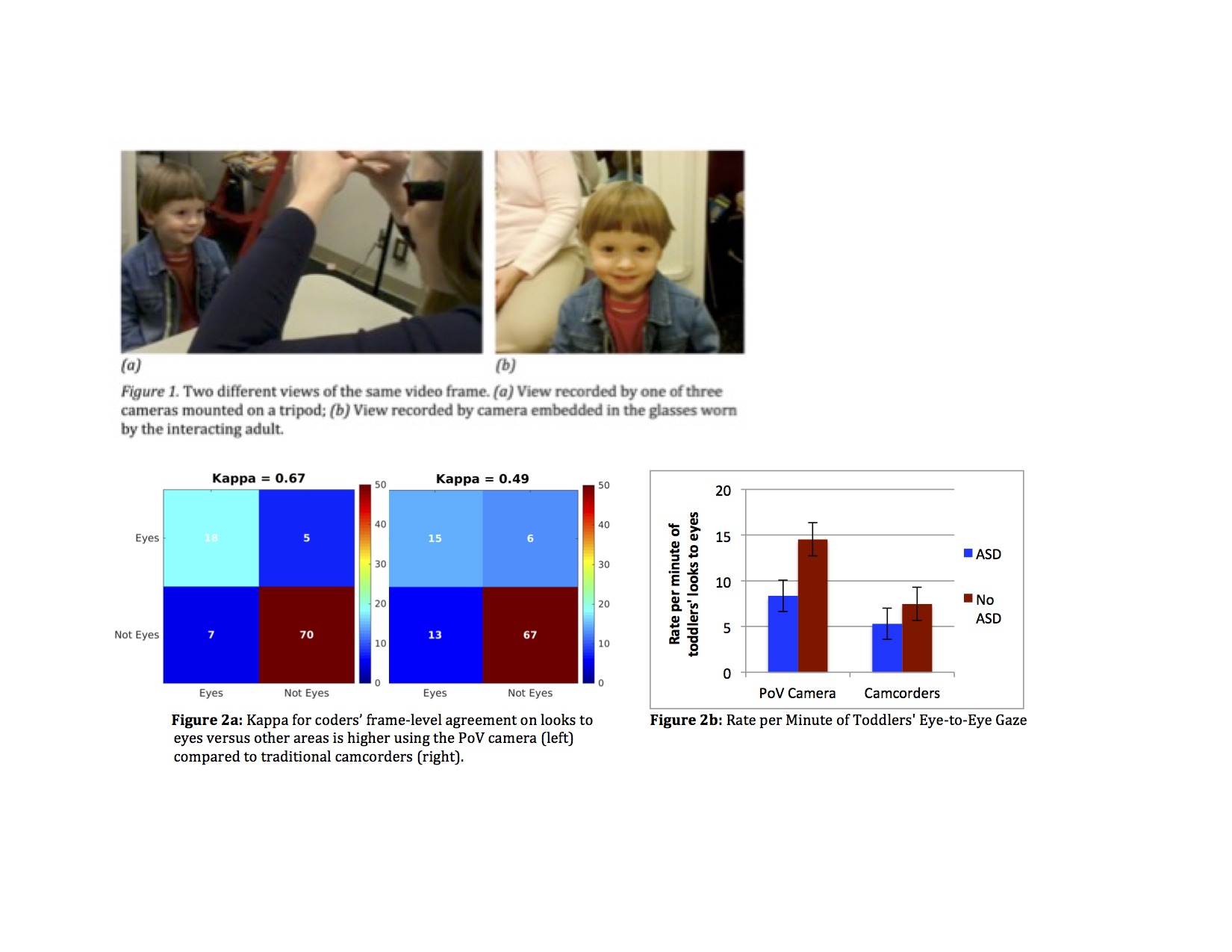