Methods: To date, we have collected data from 15 typically developing controls (TDCs; age M= 14.79, IQ M =109) and 24 high-functioning adolescents with ASD (age M=14.96, IQ M =97). ASD diagnoses were confirmed with the ADOS-2 and groups were matched on age and gender distribution (p’s>.05). By the date of the IMFAR conference, we anticipate that we will have collected data from an additional 10 TDCs and 10 participants with ASD. A modified version of the Effort Expenditure for Rewards Task (EEfRT) was used as a behavioral measure of effort-based decision-making. In this task, participants were provided with the probability of receiving monetary rewards on a given trial and asked to choose between an “easy task” for a small, stable reward or a “hard task” for a variable but consistently larger reward (Damiano et al., 2012; Treadway, Buckholtz, Schwartzman, Lambert, & Zald, 2009). In addition, participants were told they were either playing to win money for themselves (“self” condition) or for a hypothetical person on a particular trial (“other” condition).

Conclusions: Findings suggest that adolescents with ASD are biased towards less effort expenditure for rewards for themselves and for others. These results stand in contrast to our previous findings, in which we found that adults with ASD were biased towards more effort expenditure for rewards. Adolescence in particular may be a period during which reward-based decision-making differs compared to adults (Blakemore, 2008; Rilling & Sanfey, 2011), and these results further highlight that ASD research should be framed in the context of longitudinal change (Karmiloff-Smith, 1998). Future research in this area will consider younger children with ASD as well as effort expenditure for more personally relevant rewards in ASD. 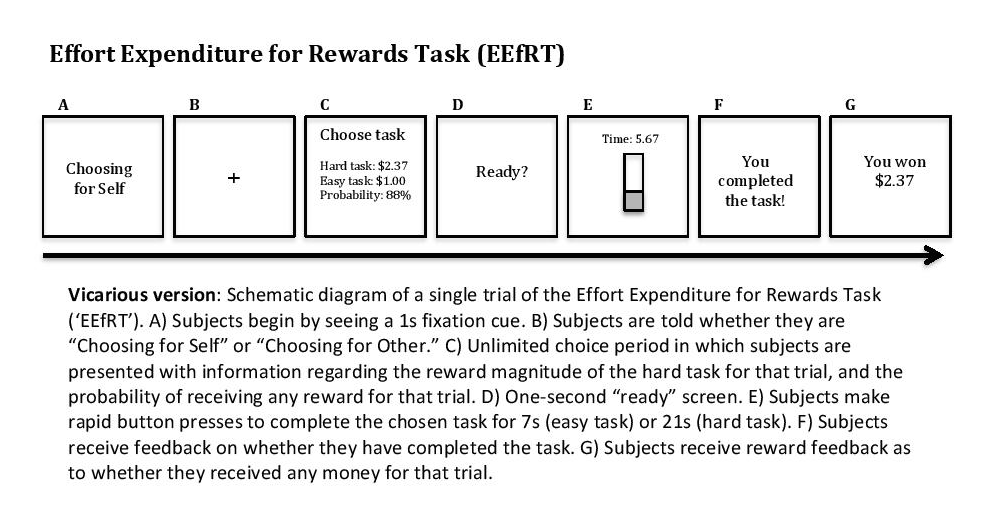