22052
The Onset of Restricted, Repetitive and Stereotyped Patterns of Behavior in 18 Month Olds with Suspected Language Delay

Hall A (Baltimore Convention Center)
A. Thurm1, S. S. Manwaring2, L. B. Swineford3, A. Stevens2 and C. Farmer4, (1)National Institutes of Health - National Institute of Mental Health, Bethesda, MD, (2)University of Utah, Salt Lake City, UT, (3)Pediatrics and Developmental Neuroscience Branch, National Institute of Mental Health, Bethesda, MD, (4)National Institutes of Health, Bethesda, MD
Background:  The study of the ontogeny of ASD symptom development has begun to include exploration of the early presence of Restricted, Repetitive and Stereotyped Patterns of Behavior (RRBs) in children at risk but not yet diagnosed with ASD (Elison et al. 2014). With significantly more studies devoted to the differentation of delay versus deviance in social-communicative skills, it is important to also explore the presence and timing  of RRB’s in children at risk for autism because they show specific delays  (e..g language delay).

Objectives:  The aim of the present study was to examine the frequency and timing of RRB onset in 18 month olds evaluated due to referral for language delays.

Methods:  Participants (n=37) were recruited based on suspicion of language delay, with only one child diagnosed with ASD before study participation.  Data were collected during an initial screening at approximately 18 months of age (mean = 18.6, SD = 1.4, range 16-21 months). The assessment battery included the Mullen Scales of Early Learning, the Autism Diagnostic Observation Schedule, 2nd Edition (ADOS-2) Toddler module and the Autism Diagnostic Interview-Revised (ADI-R) Toddler version- four restricted and repetitive behavior domain items (RRB), in which a score of 0 indicates absence of a symptom, 1 indicates mild presentation, and 2 indicates symptoms with interference. The Repetitive Behavior Questionnaire (RBQ) was also administered to a parent.

Results:  The mean nonverbal ratio IQ in this sample was 94.2±17.1, with a mean verbal ratio IQ of 61.0±22.8. Of 33 participants with ADI-R administrations, 42% (n=14) had a score of zero on the RRB domain. Eleven toddlers (33%) had scores of 1 or 2, and the remainder (n=8, 24%) had scores of 3 to 8. All RRBs were reported to emerge by 18 months of age, with specific behaviors noted as early as 2 months of age (Sensitivity to Noise) (Figure 1). Two behaviors, Difficulties with minor changes in routine and Resistance to trivial changes in environment were not reported for any participant. The ADI-R RRB algorithm score was strongly correlated with the ADOS RRB severity score and the Social Affect severity score, and was more moderately correlated with the RBQ Total Score (Table 1). Both the ADI-R and ADOS RRB scores were negatively correlated with Mullen nonverbal and verbal ratio IQs. The RBQ Total Score was not correlated with the Mullen scores. The earliest reported age of onset for any repetitive behavior was calculated from the ADI-R, but this did not correlate with any other variable.

Conclusions: This study found significant rates of RRBs in 18 month olds referred for language delay, with sensory related symptoms starting earliest. Validating previous findings, insistence on sameness was minimal in this young sample, but the presence of motor movement abnormalities and repetitive use of objects was frequent.  Repetitive behaviors, both reported and observed, were strongly related to each other and to both nonverbal and verbal development.  Further studies with larger sample sizes and diagnostic outcome groupings should explore the stability of RRB’s in children referred for language delays. 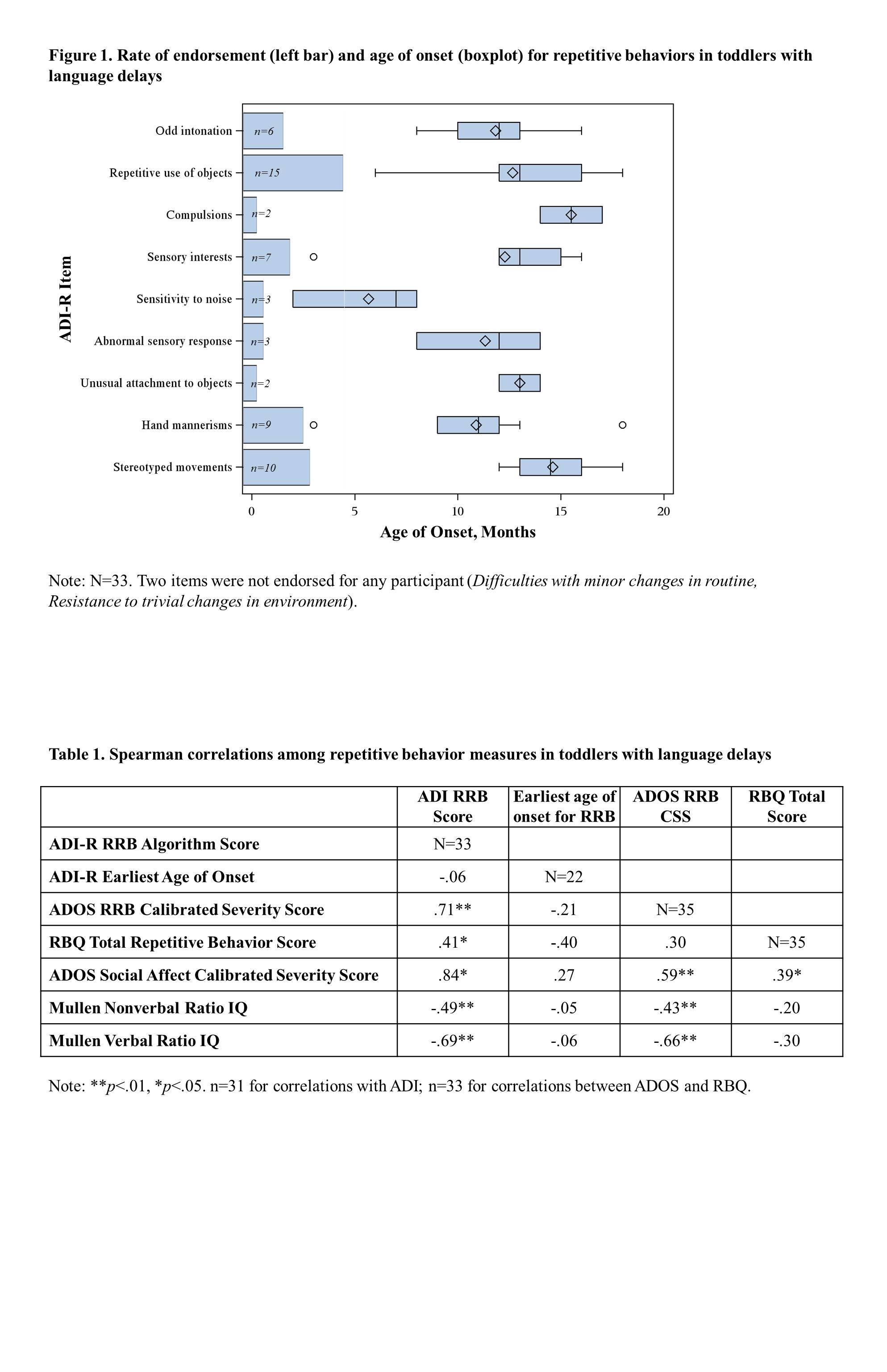