22096
Autism Pathway Network Analyses Identify Overlaps with Other Disease Groups, Involve Many Functions and Converge upon MAPK and Calcium Signaling

Objectives:  Identifying convergent molecular pathways in which multiple candidate genes are involved may be an effective way to gain insight into the underlying molecular bases of ASDs. We sought to combine information from several existing and well-established databases to contextualize autism-associated genes in relation to the functions of gene products, the networking of reactions, pathway-pathway and gene-pathway interactions, and disease-disease relationships.

Methods:  We first investigated enrichment within the Human Gene Module of SFARI Gene, by computing overlaps between SFARI genes and MSigDB (Molecular Signatures Database, v4.0) gene set derived from KEGG (Kyoto Encyclopedia of Genes and Genomes) Pathway Database. This allowed us to generate a ranked list of the top 50 pathways within which the ASD genes were enriched. We then applied Redundancy Control in Pathway Databases (ReCiPa) to the enriched pathway list, to minimize the impact of potential redundancy caused by some highly overlapped pathways, which were merged as collections, yielding a final list of 40 pathways, grouped in Disease and Function categories. KEGG pathway maps were used to identify the interactions among pathways, which were fully depicted in a pathway network map. The relative frequencies of representation of components of the pathway network were quantitatively ranked and assessed by tabulating the number of interactions each pathway had within the network. No weighting was applied as there were no standard methods available.

Conclusions:  Our key findings, derived from methods free of a priori assumptions regarding relevance to autism, demonstrate marked overlap between ASD genes/pathways and those associated with other diseases, and indicate that environmental information processing is broadly impacted. Findings converged upon MAPK signaling and calcium signaling pathways—which impact a large range of biological processes involved in many functions and diseases—as interactive hubs in the autism pathway network. These findings support the idea that, based upon potential compromise of many types of biological output, autism-associated genes may contribute not only to core features of autism themselves but also to vulnerability to other chronic and systemic problems potentially including cancer, metabolic conditions and heart diseases. ASDs may thus arise, or emerge, from underlying vulnerabilities related to pleiotropic genes associated with pervasively important molecular mechanisms, perturbed environmental information processing and multiple systemic co-morbidities. 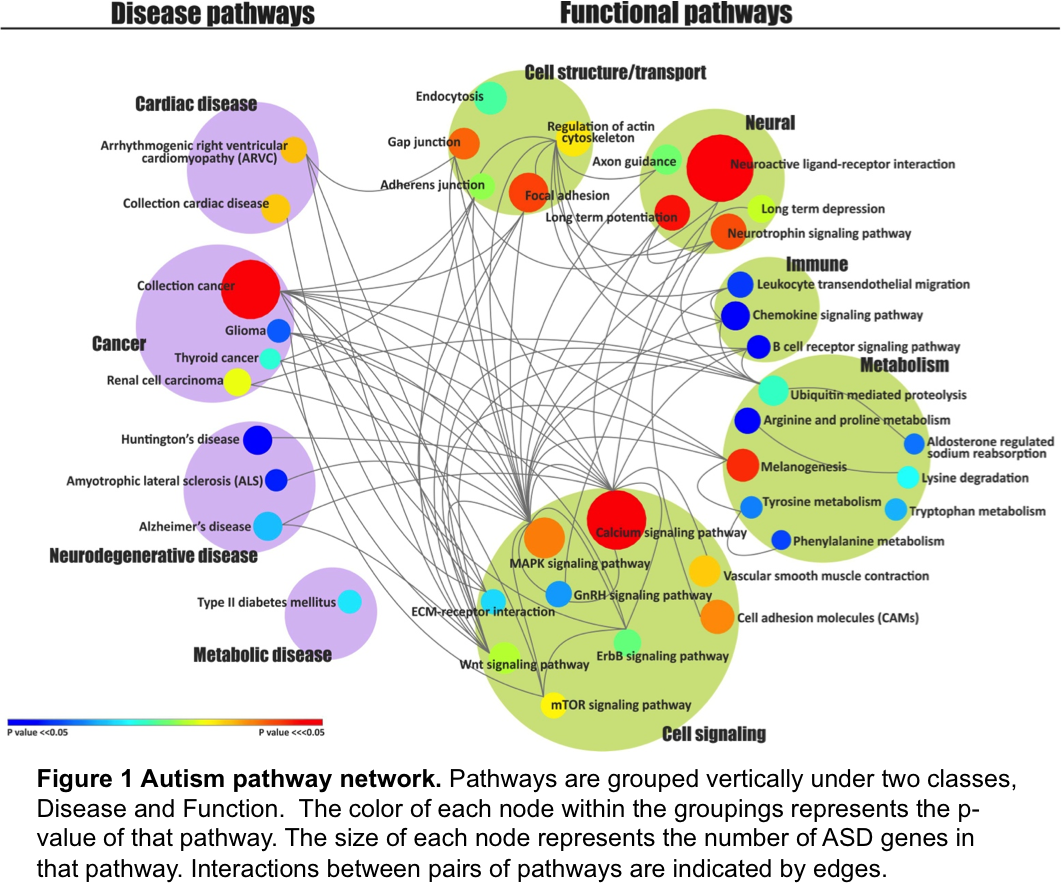