Objectives: To determine the extent to which deficits associated with ASD in TSC overlap with those in toddlers with non-syndromic ASD by examining item-level symptom profiles from a play-based diagnostic measure of ASD (the Autism Diagnostic Observation Schedule [ADOS]) and, second, to examine the clinical characteristics of toddlers with TSC and ASD by comparing cognitive function and epilepsy severity between toddlers with and without an ASD diagnosis.

Methods: This is the endpoint analysis from the first longitudinal investigation of autism risk factors in infants with TSC. Measures included the Autism Diagnostic Observation Schedule (ADOS), the Mullen Scales of Early Learning (MSEL), and for the TSC group, clinical epilepsy variables. Four groups were compared for the primary analysis: TD, TSC/no ASD, TSC/ASD, nonsyndromic ASD. A repeated measures analysis of variance (ANOVA) was performed with the between subjects factor of group and within subjects factors of each ADOS item in the social communication and repetitive behavior/restricted interest domains. Within TSC group comparisons on epilepsy characteristics and cognitive domains were performed using independent samples t tests.

Results: Children with TSC and ASD demonstrate a profile of social communication impairment that, at the behavioral level, has almost complete convergence to that of children with non-syndromic ASD. There were no individual markers that distinguished the two groups. This convergence was observed despite the high comorbidity between ASD and cognitive impairment in the TSC group. Within the TSC group, although there were trends towards greater seizure severity in those children with TSC/ASD, there were no statistically significant differences in epilepsy characteristics between those with and without ASD.

Conclusions: This study supports the clinical diagnosis of ASD in young children with TSC and demonstrates remarkable convergence of autism symptoms between TSC/ASD and non-syndromic ASD, despite greater cognitive impairment in children with TSC. Our results necessitate a study of early intervention in toddlers with TSC, with treatment strategies targeting social communication function as well as broader developmental domains, before the onset of autism symptoms. 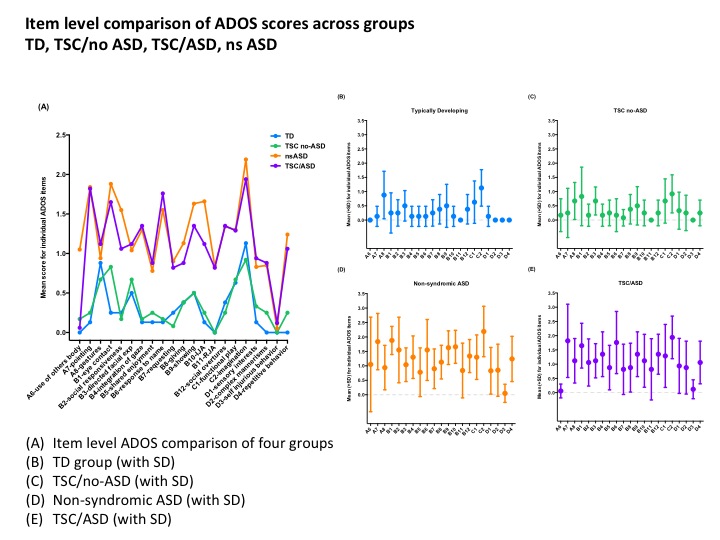