22151
A Profile of Visual Illusion Susceptibility in ASD

Hall A (Baltimore Convention Center)
O. Landry1, I. Sperandio2, S. Crewther3 and P. Chouinard1, (1)La Trobe University, Bendigo, Australia, (2)University of East Anglia, Norwich, United Kingdom, (3)La Trobe University, Melbourne, Australia
Background:   Visual illusions provide a means to understand how contextual visual information is used to perceptually rescale how people see objects in the world. Previous research examining illusion susceptibility in ASD has yielded inconsistent conclusions as to whether or not people with an ASD perceive illusions differently. One possible explanation is that previous research has tended to treat global processing, which underlies illusory susceptibility, as a singular cognitive construct. We hypothesize that one cannot treat visual illusions this way. Illusions come in different classes, each class reflecting distinct cognitive operations, which may or may not be affected in ASD.

Objectives:   Our objectives were to test a battery of visual illusions in participants with ASD and examine susceptibility across different classes of illusions. These classes of illusions were derived in a separate study of 131 typically developing adults using factor analysis (Chouinard et al., under review).

24 participants, including 12 with ASD were included. Comparison participants were selected to best match the participants with ASD one-to-one on age and Raven’s Progressive Matrices raw scores (mean age: 13 yrs, range: 7 to 23 yrs; mean RPM score 36, range 24-50). We measured susceptibility to 13 of some of the most frequently tested visual illusions using the Methods of Adjustment approach. The illusion battery consisted of the Ponzo, Sander’s Parallelogram, Ehenstein, Jastrow (Component 1), Helmholtz-Square, Horizontal-Vertical line, Muller-Lyer, (Component 2), Delboeuf, Ebbinghaus (Component 3), Shepard’s tabletops, Square-Diamond (Component 4), Oppel-Kundt and Poggendorf (Component 5) illusions. To allow meaningful comparisons between illusions, we computed normalised indices of susceptibility for each illusion as: ((Perceived Size of Stimulus B - Perceived Size of Stimulus A) / (Perceived Size in Stimulus A + Perceived Size of Stimulus B)); B denoting the stimulus one would expect to see greater judgements in perceived size. Participants also completed control tasks to measure basic abilities in visual acuity and discrimination.

Conclusions:   In ASD, we found reduced susceptibility to one specific illusion, the Shepard’s tabletop illusion. This is consistent with a previous report by Mitchell, Mottron, Soulières, and Ropar, (2010). Furthermore, in adults, this specific illusion elicits a strong illusory percept, which is correlated with autistic traits as measured by the AQ (Chouinard et al., under review). Within our sample, the Shepard’s tabletop is also the only illusion for which children’s susceptibility scores are lower than those of adults (as reported in Chouinard et al., under review), however susceptibility was not correlated with age within our sample. These findings will contribute to our more general understanding of altered visual perception in ASD, shedding light into the nature of global processing. Particularly, what types may or may not be affected in ASD. 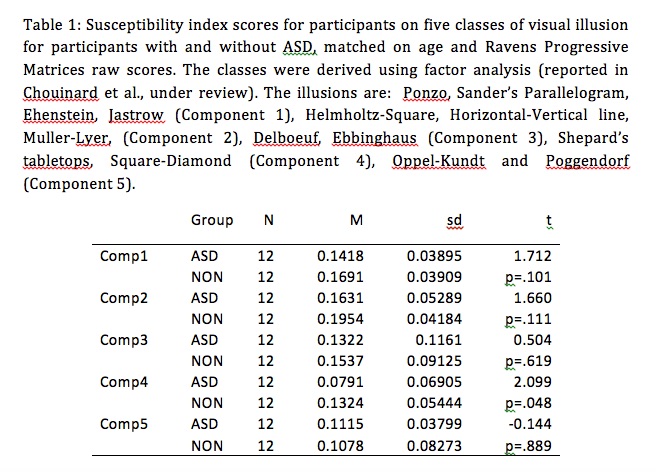