Individuals with autism spectrum conditions (ASCs) often report hypersensitivity to intense sensory stimuli, such as loud sounds and high contrast patterns. This might be due to an abnormality in the neural transduction of sensory signals, perhaps involving differences in gain control.

Here we looked for objective evidence of atypical contrast responses both in adults with a clinical diagnosis of an ASC, and in the general population as a function of autistic traits.

We used a steady-state VEP paradigm, in which observers viewed on-off flickering sine wave grating stimuli of 0.5c/deg at a range of contrasts (0-64%) whilst their EEG activity was recorded from 64 scalp electrodes. The dependent variable was the EEG amplitude at the target frequency (7Hz) or the second harmonic of the target frequency (14Hz). In study 1, 12 adult participants (1 female) had a clinical diagnosis of an ASC, and 12 participants were age- and gender-matched controls. Clinical diagnoses of ASC were confirmed by an ADOS interview, which was also completed on control participants. In study 2, 100 neurotypical adults completed the same EEG paradigm. Participants also completed the autism quotient (AQ) (study 1) or short-AQ (study 2) questionnaire, and stated that they did not suffer from epilepsy.

In study 1, a 2x2x7 mixed ANOVA revealed a significant frequency by group interaction. Individuals with a clinical diagnosis of an ASC (mean AQ 31) had increased responses at the first harmonic, but weaker responses at the second harmonic frequency (F1,22=4.41, p<0.05), compared with controls (mean AQ 17). These effects emerged at higher stimulus contrasts, and were not evident at baseline. In study 2, we performed a median split by AQ score. There was again a significant interaction between frequency and group (F1,98=5.59, p<0.05), with the high AQ group (mean AQ 21) having lower amplitudes at the second harmonic than the low AQ group (mean AQ 10). This was confirmed by a significant negative correlation between AQ and the second harmonic amplitude at the highest contrast tested (r=-0.21, p<0.05).

In two studies, we found a reduction in the amplitude of the second harmonic response that was associated with both clinically diagnosed autism, and higher levels of autistic traits. Second harmonic responses are believed to originate from complex cells in primary visual cortex that code for changes in contrast. This finding might therefore explain the poorer performance of children with ASC on a contrast discrimination task (Greenaway et al., 2013, Neuropsychologia). We also observed increased first harmonic responses in individuals with an ASC diagnosis. This is similar to findings in individuals with epilepsy (though none of our participants had ever experienced a seizure), and may be related to feelings of discomfort elicited by intense visual stimuli. In a companion study, we have found analogous effects in a fly genetic model of ASC, involving mutations of the sodium-hydrogen exchanger gene, Nhe3. This suggests that the cellular processes mediated by this gene might be responsible for sensory abnormalities commonly experienced in autism. 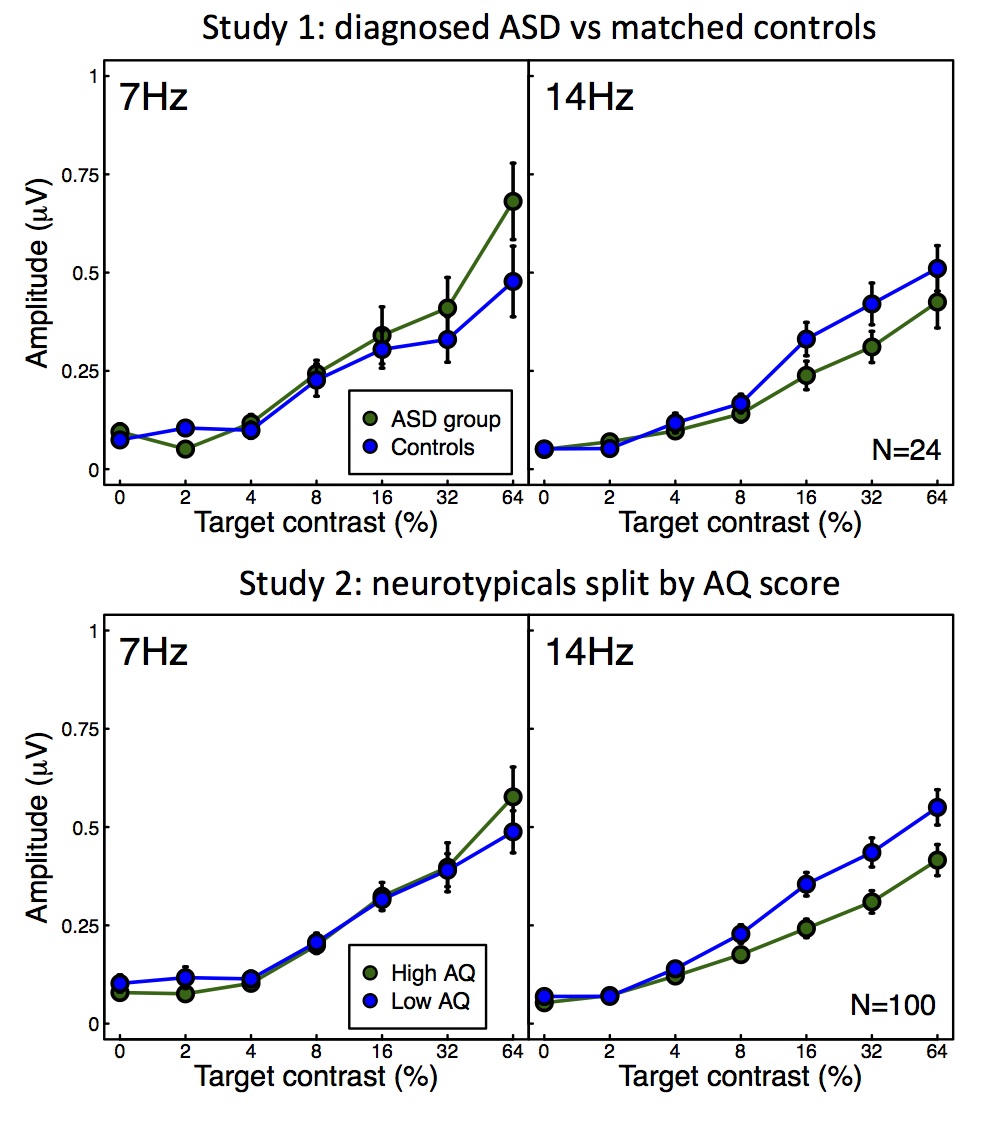