Atypical comprehension of, and attention to social communication are core symptoms characterizing the Autism Spectrum (AS). Among other aspects, social communication includes processing information provided by body language, or Body Motion (BM). BM can be depicted using point-light displays, a minimalistic presentation of humans in action. Previous studies evidenced that autistic people were able to recognize simple actions through BM (Paron et al., 2008), but were less accurate when BM carried an emotional or social content (Centelles et al., 2013). Processing Social BM involves a large set of cerebral regions belonging to the mentalizing (MN) and the Mirror Neuron (MNS) systems, the basal ganglia and parts of the cerebellum.

Using fMRI, we recorded brain activity when participants watched point-lights videos of two actors either engaged in a Social Interaction (SI) or moving without interacting (NSI). Fifteen AS (diagnosed according to the DSM-IV criteria using the ADI-R and/or ADOS) and fifteen non-AS participants matched on age, IQ and gender performed a SI/NSI recognition task. Groups were compared in terms of behavioral performance, cerebral activity and functional connectivity. The connectivity analysis was performed on regions of interest (ROI) selected in the functional contrasts based on their reported implication in social BM processing. Regions belonging to the MN, MNS, the striatum and the cerebellum were included together with visual areas that are known to be over-implicated in visual social and non-social tasks in autism. Clusters detected in each group were pooled, resulting in one set of ROI which individual time-series were extracted. A General Linear Model was designed to take into account the variations due to the task. Finally, correlation coefficients were extracted for each pair of ROI, for all-task, and for each condition: SI, NSI, BM (SI+NSI) and Control. Non-parametric statistical tests were used and False Discovery Rate correction was applied.

AS were significantly slightly less accurate than non-AS participants to recognize SI only (93% and 86% correct for non-AS and AS respectively). Functional activations in non-AS were found in expected regions. The AS group showed sparser activation, with a strong implication of the striatum and primary visual cortex, the latter being nevertheless under-connected to the other ROI in the connectivity analysis. We also found evidence of atypical MNS involvement in the task and significant under-connectivity of the medial pre-frontal cortex (MPFC) during social processing. Surprisingly, a striatal over-connectivity was associated with the processing of BM and its social clues in autism.

By investigating the neural correlates of BM processing in AS, this work evidenced the use of atypical mechanisms by autistic people, who seemed to rely more on the strong implication of striatal and visual systems that might compensate for the under-implication of the MPFC in this task. 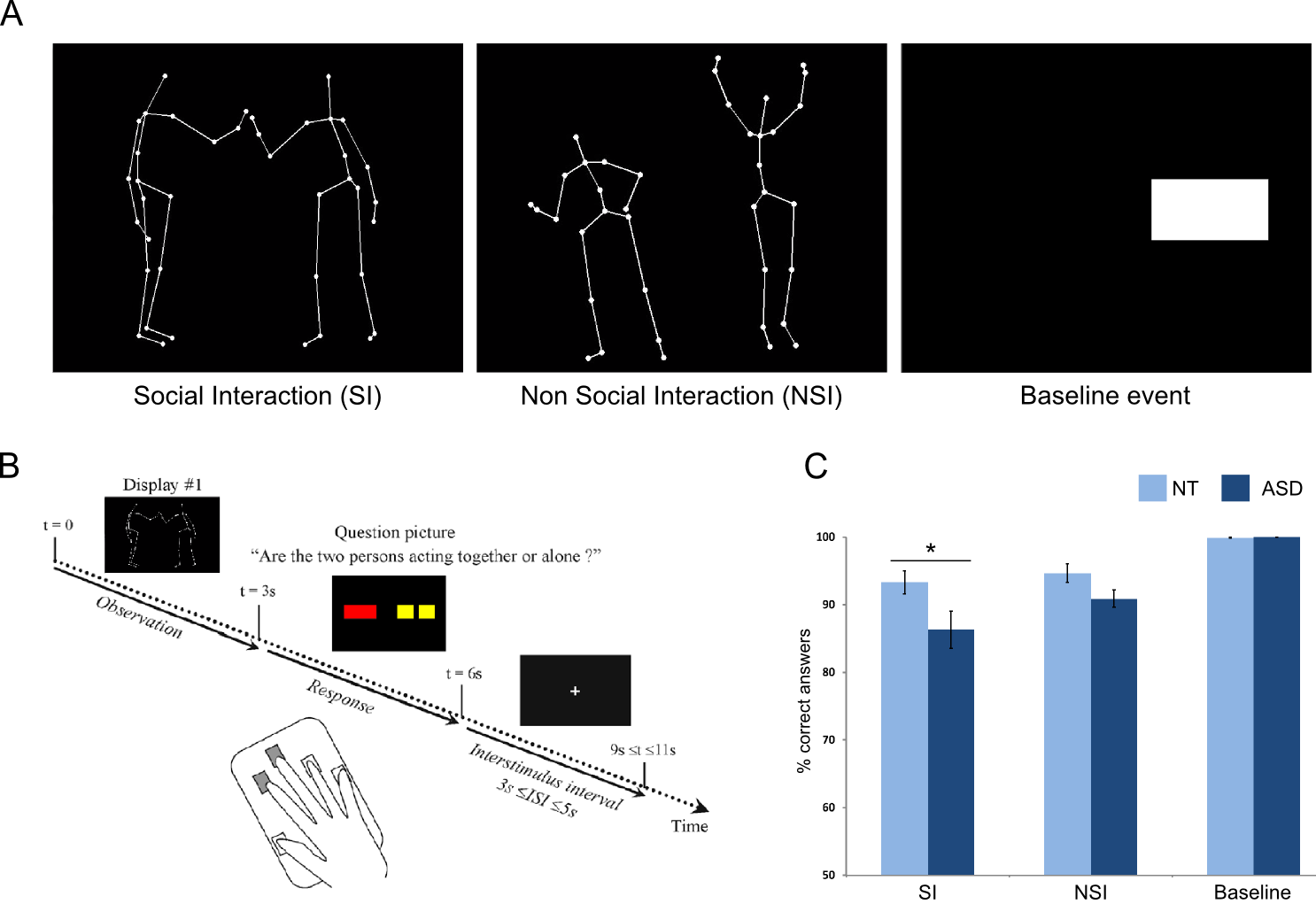