The right temporo-parietal junction (rTPJ) sits at the border of the dorsal and ventral attention and fronto-parietal networks. This region is associated with increased activation during social-cognitive and attention tasks in neurotypical (NT) individuals, whereas individuals with ASD display atypical activation. Deficits in these behaviors are a core phenotype of ASD, thus the rTPJ is a crucial region to understand the relationship between brain and behavior in this disorder. In NT, the rTPJ displays a heterogeneous organization of distinct sub-regions, each of whom show differential task activation and intrinsic functional connectivity. This functional organization has also been shown to specialize with age. Thus, regional heterogeneity may reflect optimal age-related local and network-wide specialization for efficient task engagement. Atypical specialization of this region in ASD may contribute to the social and attention deficits seen in the ASD phenotype. However the relationship between heterogeneity of the rTPJ and the behavioral deficits in ASD are unknown.

The objectives of the current study are to compare intrinsic rTPJ heterogeneity in NT and ASD. We also examine regional organization for age-related changes and relationships with diagnostic assessment scores in the ASD group.

We used a large, multi-site sample (N = 240, 107 ASD) of NT and ASD resting-state data from the Autism Brain Imaging Database Exchange. We started with a rTPJ region defined within the default mode network from the Yeo et al., 2011 functional atlas and progressively dilated the original ROI three times in order to progressively expand the borders into other networks.  Then, using principal component analysis, we extracted the percent variance explained by the first eigenvector of time-series at each ROI level as a measure of regional heterogeneity (i.e., reduced percent variance is associated with greater heterogeneity). We expect this measure to be inversely related to ROI size, a pattern that highlights increased heterogeneity as the ROI expands. However, we hypothesize that the ASD group will show less heterogeneity compared to the NT group, suggesting less functional specialization. We then examined regional heterogeneity for age-related changes and relationships with diagnostic scores in ASD.

A within-group main effect was detected for ROI size (F(3,948) = 5.04, p < .002), which demonstrates that region dilation yields increased heterogeneity. Between-group differences were only detected at the largest two ROIs (second dilation: t(240) = 1.95, p < 0.05; third dilation: t(240) = 2.17, p < 0.03) showing that the ASD group displayed less heterogeneity at the largest two ROI sizes. No relationship was detected with respect to age. Also, no relationships with diagnostic scores were detected, however there was large variability between sites.

We found that as region size increased, regional heterogeneity decreased in both groups.  In addition, the ASD group displayed less heterogeneity than the TD group in the largest two ROI dilations. This suggests that there may be less functional specialization at the network borders surrounding the rTPJ, which could have important implications for understanding brain organization in ASD. 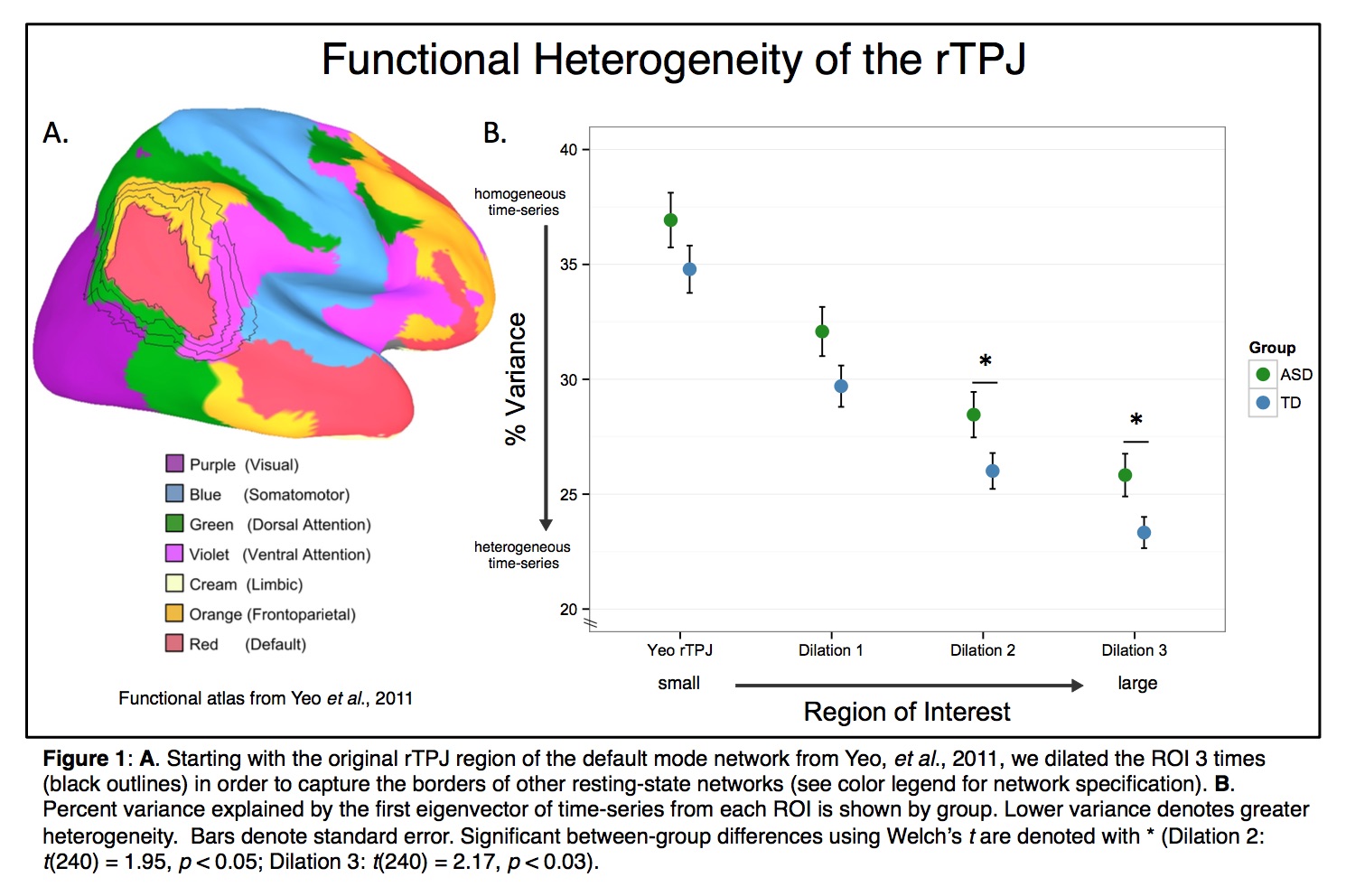