Prevalence rates of anxiety disorders in children with autism are much higher than in typically developing children. There is also significant symptom overlap between the anxiety and autism disorders, for example, in social withdrawal and avoidant behavior.

Here we attempt to disentangle the unique contribution of anxiety to behavioral response to threat by examining approach and avoidance/withdrawal behavior in the context of mildly aversive social and non-social stimuli, in children with and without autism.  We hypothesized that children with autism would exhibit more avoidant behavior in response to social, but not non-social aversive stimuli, compared to typically developing children.  We also hypothesized an interaction between anxiety symptoms and stimulus, such that children with higher levels of anxiety would respond similarly to both social and non-social stimuli.

A total of 70 children aged 2-4 years participated in our study, with 41 children with autism (32 M) and 29 typically developing controls (22 M). Results are from the first videos coded (by coders blind to diagnostic group): 12 children with autism and 15 typically developing children (presentation will include analyses of entire group). Social and non-social approach-withdrawal was assessed using the Stranger task of the Laboratory – Temperament Assessment Battery (LabTAB) (a ‘stranger’ enters the room and interacts with the child) and the Unpredictable Mechanical Toy task of the LabTAB (battery-operated toys are presented to the child).  Total time (in seconds) that children were engaged in proximity-related behavior (time spent approaching vs. avoiding the stranger and toys) was coded, as was the total time (in seconds) that children attended to vs. away from the stimuli. We created two approach-avoidance indices by determining the ratio of time (seconds) spent approaching vs. avoiding the stimulus and looking at vs. away from the stimulus (i.e., we calculated separate proximity and attention indices). A low index value (less than 50) indicated a relatively greater proportion of time engaged in withdrawal behavior/gaze aversion and a high index value (greater than 50) indicating a relatively greater proportion of time engaged in approach behavior/stimulus attention. Anxiety symptoms were assessed with the Early Childhood Inventory-5.

Proximity Index. As predicted, children with autism exhibited similar patterns of approach vs. avoidant behavior as did the control children in the non-social condition (p=0.19, η2=0.07), and increased avoidance in the social condition (p<0.01, η2=0.40) (see Figure 1).

These preliminary results suggest an atypical relationship between anxiety and socially-directed attention in autism, indicating a pattern of vigilance in this group not seen in the typical children (pending final analyses). 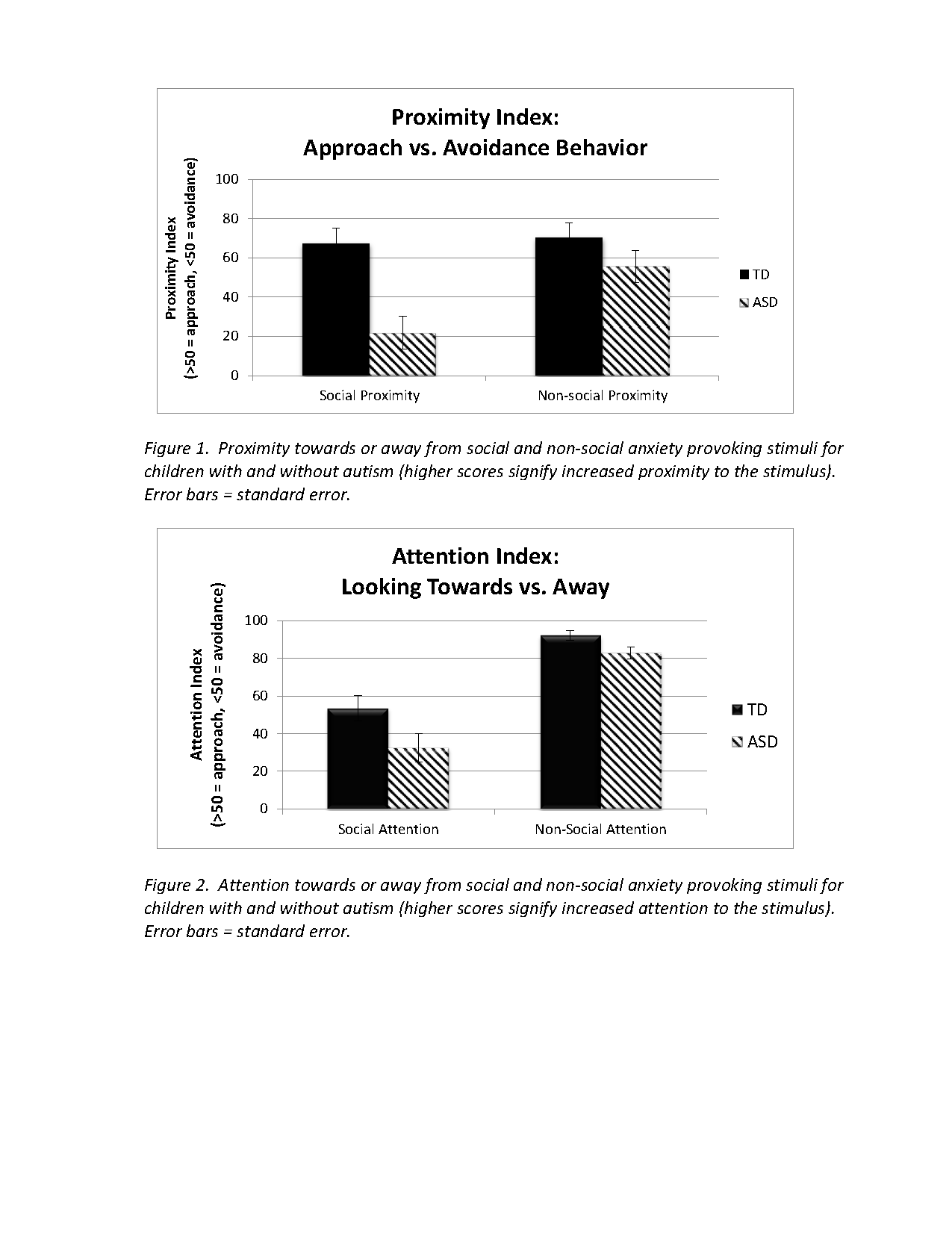