Among children with autism spectrum disorders (ASD), comorbid anxiety is common, affecting up to 80% of children. Anxiety symptoms are already more prevalent in 3-5-year-olds with ASD compared to preschoolers with other psychiatric disorders. In typically-developing children, individual differences in attention and proximity to a threatening stimulus are associated with social inhibition and anxiety. Little is known about these putative anxiety precursors in toddlers with ASD or relationships with fearful temperament.

To examine emotional reactivity, attention, and approach/escape in toddlers with ASD compared to their non-ASD peers in response to behavioral probes aimed at eliciting fear, and to examine parent-reported fearful temperament and its relationship with in-vivo responses.

There was a significant group difference in the behavioral fear response (F(2,47)=4.65, p=.01; Fig1). Planned contrasts indicated that the ASD group exhibited less intense fearful affect than the TD group (p<.01) and the DD group (p=.04). There were no group differences on the Fear subscale of the ECBQ (p=.80). The ASD and TD groups did not differ in terms of time spent looking at the spider (M=91.1%, SD=6.4 and M=93.8%, SD=4.0, respectively; p=.37), and toddlers with ASD spent more time physically approaching the spider than did children with TD (p=.006). Visual attention to the spider appears to serve a different function for children with ASD: while TD toddlers with more pronounced in-vivo fear responses were more likely to attend to the spider (r=.60, p=.01), looking was more randomly associated with fear for the children with ASD (r=-.18; Fig2).  Similar patterns of associations between attention to spider and fearfulness were found when considering parent-reported fear (ECBQ, r=.59, p=.05 in the TD group; r=.04 in the ASD group).

This study suggests a divergent response to threat in toddlers with ASD compared to TD and DD at the level of behavioral fear responsivity and proximity seeking, one that is not evident via parent report of fear. Although the overall duration of looking at a threatening stimulus was similar across diagnostic groups, the patterns of associations with fearful temperament appeared different in the two groups. This study suggests a potential decoupling of affective responses to threat and voluntary attentional strategies for handling such threat in young children with ASD. The factors underlying atypical emotional reactivity in ASD, including attentional, physiological, affective, and cognitive processes require further examination. 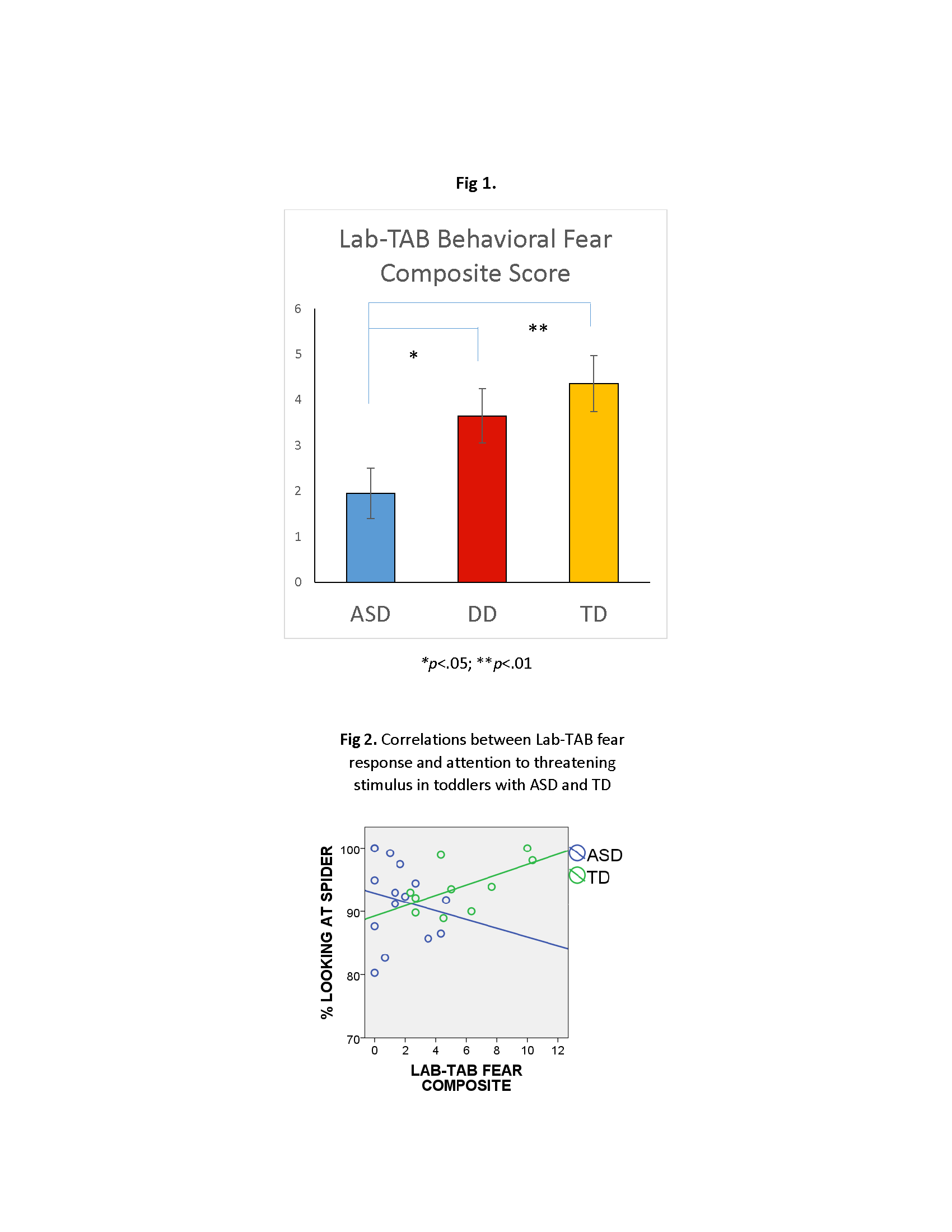